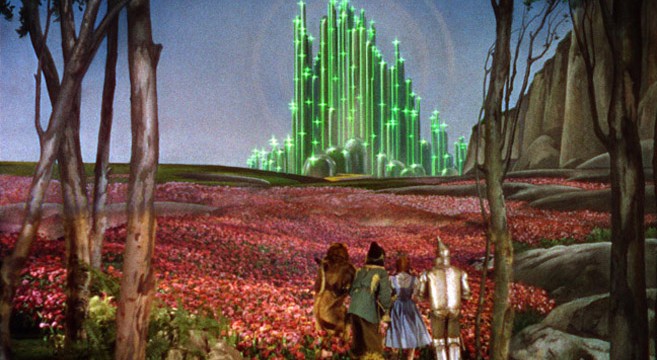 This month marks the 75th anniversary of The Wizard Of Oz which was released by MGM in August 1939.  Based on the 1900 book by L. Frank Baum entitled The Wonderful Wizard Of Oz, the film went on to bank some major box office at the time, and would eventually become one of the most beloved classics of all time.  Wizard Of Oz is also one of film history’s most mythological in terms of its influence and the overall mystery that surrounds the production itself.  We’ve all heard some of the strangest stories and urban legends surrounding the film (most famously the debunked tale that a dead body of a suicide victim can be seen hanging in the background of one scene) but in an effort to separate fact from fiction, here are the top 16 craziest things that actually did happen on set:

1) The actor who originally played the Tin Man during the film’s first days of shooting, Buddy Ebsen, had to leave the film because the silver makeup used for his costume was so toxic his lungs became infected with aluminum dust.  The dust “coated his lungs like paint,” as one historian explains.  His replacement, Jack Haley, took over the role yet still described the experience as pure hell.

2) Billie Burke who played Glinda the Good Witch was 54 during filming, while Margaret Hamilton who played the Wicked Witch was only 36-years-old.  Hamilton’s evil green makeup added decades to her age, but she nearly lost her life during filming when she suffered severe burns during a scene when explosives created a puff of smoke for her character to disappear.

4) The lights used for Technicolor film were so bright they made it appear as if Judy Garland’s dress was blue and white instead of its actual colors which were blue and pink.  The lights also made the set unbearably hot at more than 100 degrees Fahrenheit.  There were so many lights, in fact, that they are often visible on the reflective surfaces of the sets, especially in the Oz scenes.

5) Three ruby red slippers were used during filming, with red chosen by MGM studio chief Louis B. Mayer as a way to showcase the very best of Technicolor film’s potential.  Each of those three pairs is now worth $1.5 million.

6) Although Wizard Of Oz synchs perfectly to Pink Floyd’s Dark Side Of The Moon album, the band has made it explicitly clear it is a total coincidence.  One factoid that is definitely not a coincidence is the The Wicked Witch’s death certificate which is dated May 6, 1938, which honored the 20th anniversary of L. Frank Baum’s death.

7) The character of Dorothy was unofficially 12-years-old in the original book, while Judy Garland was 16 during the shoot.  Producers forced her to wear a corset to flatten her chest, which proved to be extremely painful for Garland and made it very hard to breathe.

8) Jack Haley who played the Tin Man had a son who would later go on to marry Judy Garland’s daughter, Liza Minnelli, in the 1970s.

9) The first cut of the film was too long at 120 minutes, and the first scene that landed on the chopping block was Garland’s iconic “Over The Rainbow” performance.  Producers felt the film’s young audience wouldn’t understand the message of the song, and they also felt it was degrading for Garland’s character to be seen singing in a barnyard.  The scene, however, was eventually saved.

10) During the scene where Garland slaps the Cowardly Lion, she couldn’t keep it together and kept laughing hysterically each time.  To get her into character, director Victor Fleming pulled Garland aside and slapped her across the face.  She stopped giggling and nailed the scene in the next take.

11) The special effects crew used flavored Jell-O powder to color the horses during the Emerald City scenes.  However, shooting had to happen fast because the horses kept licking themselves.

12) Bert Lahr’s lion costume was painfully heavy to wear, coming in at more than 100 pounds.  It was also made of real lion pelts.

13) Margaret Hamilton’s Wicked Witch makeup was so toxic she was forced to be on a liquid diet during the shoot in order to avoid any possible ingestion.  The green copper-based makeup also died her face green for weeks after shooting had wrapped.

14) Five directors and fourteen writers were needed to bring the film to the big screen.

15) Carcinogenic asbestos fibers were used as snow in the poppy field scene.

16) The sparks that come off Dorothy’s red slippers when the Wicked Witch tries to take them off were actually created using splashes of apple juice, and was sped up on film to appear like sparks.

If you are a huge Wizard Of Oz fan, you might want to consider whipping up your own special batch of “magic” green smoke and sit back as you watch this purely coincidental synching of Wizard Of Oz to Pink Floyd’s Dark Side Of The Moon below (NOTE: sound begins around the 20-second mark).  Sure, us humans are pattern-seeking creatures by nature, and when we can’t find a pattern we will make one up.  But that doesn’t discount the fact that this 43-minute match-up is so perfect in so many ways, and quite simply never gets old.