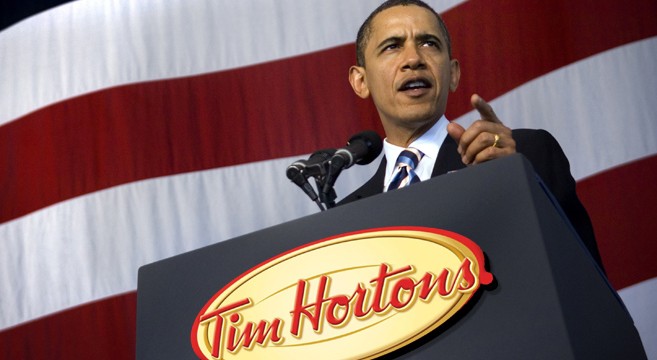 Later this week Burger King is expected to announce its massive purchase of Canadian food service provider Tim Hortons.  The purchase would make the new company the 3rd largest fast-food company in the world with combined annual sales of $22 billion.  Founded 60 years ago, Burger King’s purchase of Tim Hortons (which is celebrating its 50th year this year) would bring the new company’s total number of worldwide outlets to 18,000.  The tax inversion purchase also means Burger King would be headquartered in Canada — a necessary move in order to be granted approval by the Canadian government.  “One reason for the move may be to placate Canadian authorities,” The New York Times reports.  “The Investment Canada Act allows Ottawa to block a merger if it is deemed to not be in the best interests of the country.  A merger structure would allow [Tim Hortons] to remain Canadian.”

Miami-based Burger King’s acquisition of Tim Hortons allows the burger giant to expand its global breakfast market cap, one of the most lucrative in the fast food business.  That corner is currently dominated by McDonald’s which has made major progress in its breakfast bottom-line thanks to its hugely successful coffee line (McDonald’s also recently announced their coffee would soon be available in grocery stores).  President Obama is likely to be furious with news of the deal, which is in large part designed as a tax loop hole.  Burger King currently pays 35% tax in the U.S., and would reduce that to 15% with a move to Canada.  Last month Obama announced his administration would be taking active measures to curtail tax-inversion deals such as this, with the U.S. Congress estimating 47% of U.S. companies engaged in tax-inversion deals in the last decade.

The future of the new Tim Hortons would mean a massive number of new stores opening across America, with Burger King planning on expanding the Canadian coffee chain across the Persian Gulf in a very big way as well.  Stocks of both companies surged this morning in New York trading.  Tim Hortons is Canada’s largest food service provider, with a healthy revenue stream boosted by the fact that an average cup of Tim Hortons coffee costs the customer $1.32 to buy, while only costing the company 19 cents to produce.  You can read more by visiting The New York Times, CNBC, The Huffington Post, and The Star.  You can also read a feature story from this morning’s Los Angeles Times entitled “Burger King, Tim Hortons Talks Could Turn Up Heat On Tax Inversions”.

Previous post:
Enter The Void By Watching TRUST’s New Video For “Are We Arc?” Next Post:
Watch Robert Schwartzman’s Video Remix Of “PALO ALTO” And His New Single “It’s You”