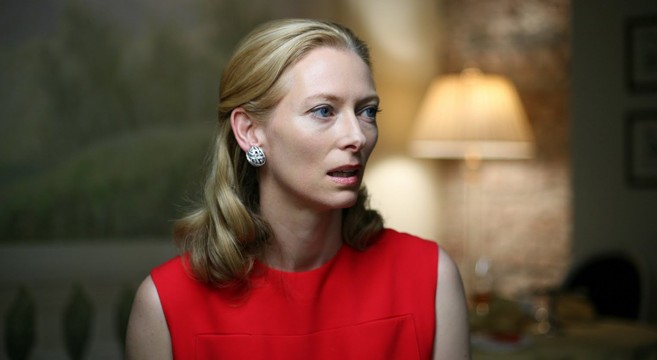 Few films have resonated and remained with me as deeply and as long as Luca Guadagnino‘s 2010 masterpiece I Am Love has.  A passion projet 11 years in-the-making, Guadagnino worked closely with producing partner, close friend, and lead actress Tilda Swinton for more than a decade to bring I Am Love to life.  Since the film’s release, Guadagnino has spent the past four years working on a wide range of documentaries (Bertolucci on Bertolucci), shorts, and fashion campaigns, but as of this weekend he is officially signed on to direct his next feature film.

Entitled A Reliable Wife, the Sony thriller is based on the Robert Goolrick novel, with an adapted screenplay by SE7EN scribe Andrew Kevin Walker.  The book’s synopsis reads as follow: “Rural Wisconsin, 1909 . In the bitter cold, Ralph Truitt, a successful businessman, stands alone on a train platform waiting for the woman who answered his newspaper advertisement for ‘a reliable wife.’  But when Catherine Land steps off the train from Chicago, she’s not the ‘simple, honest woman’ that Ralph is expecting.  She is both complex and devious, haunted by a terrible past and motivated by greed.  Her plan is simple: she will win this man’s devotion, and then, ever so slowly, she will poison him and leave Wisconsin a wealthy widow.  What she has not counted on, though, is that Truitt — a passionate man with his own dark secrets — has plans of his own for his new wife.  Isolated on a remote estate and imprisoned by relentless snow, the story of Ralph and Catherine unfolds in unimaginable ways.”

Guadagnino is a master of sublime and evocative visual style, and combined with the emotional resonance of his work, and the thriller nature of the storyline, we are in store for what promises to be a brilliant cinematic experience that Hitchcock himself would be envious to have made himself.  As Deadline reports: “It’s the first deal made for [Guadagnino] by WME, which just signed the Italian director who was last repped by ICM.  The lead role has been eyed as catnip for actresses.”

Previous post:
Sex, Love, And Sochi: Olympians Talk Openly About The Massive Amount Of Sex Happening At The Games Next Post:
National Geographic & NOVA May Have Finally Solved The Mystery Of Brunelleschi’s Revolutionary Dome