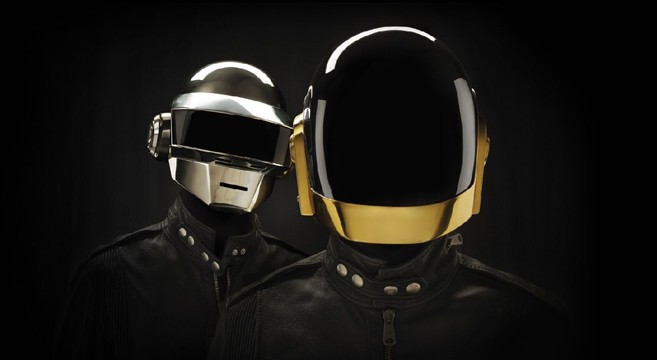 What better way for DAFT PUNK to celebrate their 20th anniversary than to take home the top prize at this year’s Grammy Awards — the coveted Album Of The Year award for Random Access Memories.  On top of that, the French duo of Guy-Manuel de Homem-Christo and Thomas Bangalter were also awarded the Grammys for Record of the Year, Best Dance/Electronica Album, Best Pop Duo/Group Performance, and Best Engineered Album  (EDITOR’S NOTE:  1) Record of the Year is awarded for a single or for one track from an album.  This award goes to the performing artist, the producer, recording engineer, and/or mixer for that song.  In this sense, “record” means a particular recorded song, not its composition or an album of songs.  2) Album of the Year is awarded for a whole album, and the award is presented to the artist, producer, recording engineer, and mastering engineer for that album.  So, in this context, “album” means a recorded collection of songs; i.e. a multi-track LP, CD, or download package — not the individual songs or their compositions).

DAFT PUNK also took to the stage to perform the album’s standout track “Get Lucky” alongside Pharrell, Nile Rodgers, and Stevie Wonder, marking the duo’s first live performance since 2010.  Performing within a set design of a 1970s L.A. recording studio which began to evolve into a glowing, multi-colored LED set piece, DAFT PUNK wore their iconic helmets, this time in pure white for the black tie affair.  The helmets have always been in a constant state of engineering evolution, and in a fascinating pocket documentary entitled Behind The Helmets, we get an inside look at exactly how sophisticated the engineering and industrial design is that has gone into these helmets.  It takes a lot of hard work to remain this anonymous for two decades.

For all FEELguide stories related to DAFT PUNK be sure to visit DAFT PUNK on FEELguide.  And for a fascinating look at 20 years’ worth of DAFT PUNK’s collaborations you can visit ConsequenceOfSound.net.