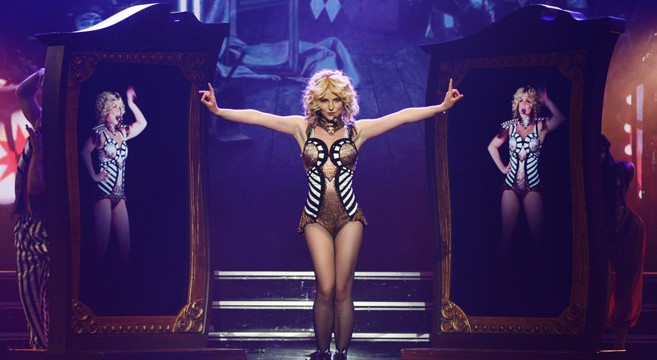 Britney Spears‘ highly anticipated Las Vegas residency “Piece Of Me” debuted Friday night, with fans and critics unanimously raving the show as an enormous smash hit.  Hitting the ball straight out of the park, Spears’ performance is reportedly beyond exceptional, and many are championing her show as the greatest work of her entire 20-year career.

“Spears’ mission in a nutshell: to turn a cavernous 7,000-seat amphitheater into a raging nightclub,” wrote Marco della Cava in USA Today.  “Mission accomplished.”  Spears sings live during much of the show, with electronic backing during the more rigorous and physically demanded moments of the show.  She is in constant motion throughout the entire performance, and as Hannah Dreier at the Associated Press writes: “The show’s production values are unusually high for a casino residency, often calling to mind the golden age of music videos … Entertainment Programming Vice President Kurt Melien said Spears sings against a recorded track of her vocals to help her through the more physically grueling parts of the set, and add the electronic undertones that characterize many of her songs.  On Friday, all but a few performances seemed to require intense athleticism.  Some audience members said it would be unfair to require Spears to perform a high-intensity workout on stage and also hit every note.  Given a choice between the two, they said they’d take the choreography.”

MTV and The Daily Beast also give the show a 21-gun salute as a brilliant success: ” ‘Her voice didn’t miss a beat,’ Sophie Schillaci at MTV reported.  ‘That’s not say her vocals weren’t live.  At times, her sweet voice shone through the backing, or we could hear her catching her breath between numbers.’  Planet Hollywood officials admitted that Spears is actually singing along to a backing track, to allow her to get through physically demanding segments of choreography.  The rousing response to that from fans in attendance: who friggin cares?  ‘With a performance this heavily focused on athleticism, asking a singer to deliver pitch-perfect vocals with no digital assistance is a bit like asking an NFL running back to run for 10 yards while carrying a tune — all game long,’ wrote della Cava. ‘This wasn’t Ella Fitzgerald with a pianist, it was a pop star brining to life the songs we crank up in the shower or at the gym.  It was about the raunchy sizzle of it all, not a virgin vocal.’  The choreography was so fast-paced and intricate that there was even a bit of a rush when live vocals were heard, as they were in ‘Me Against the Music’.”

ABC NEWS was also blown away by the show: “Spears’ Vegas engagement is setting a precedent.  Britney: Piece of Me’ is the most cutting-edge pop concert experience ever produced for Las Vegas.”   To book tickets to Britney’s Vegas show be sure to visit BritneySpears.com.  And for all things Brit you can follow her on Facebook and Twitter.  Britney Spears’ net worth is estimated to be between $200-$230 million.  To learn more about the details behind Britney’s Vegas contract you can read this: “The Details Of Britney Spears’ Mega-Lucrative Las Vegas Deal With Planet Hollywood“.

Previous post:
Ghost In The Machine: The Powerful Questions Of Love & The Nature Of Reality In Spike Jonze’s “HER” Next Post:
ISO50 Just Released Its Highly Anticipated Playlist #17 And It’s As Brilliant As All The Rest