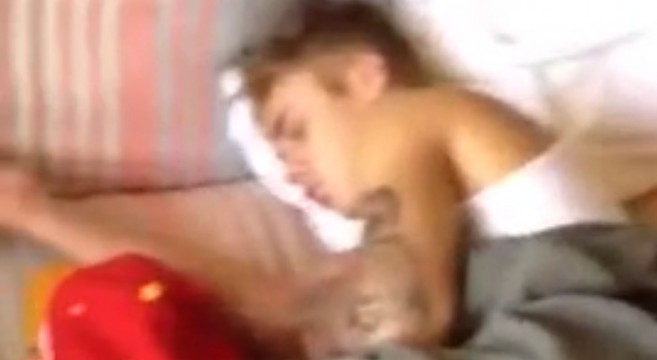 Lesson Learned: Bieber Slept With A Brazilian Hooker & She Got It All Caught On Video

Every guy makes stupid mistakes when they’re young, but 99.998% of us get to keep them private.  There is a small percentage of the adolescent male population, however, that does not get access to this privilege — the superstars.  Take Justin Bieber, for example.  Currently on a South American tour, when Bieber’s not getting smashed in the head by a plastic water bottle, he’s getting trashed with his entourage and trashing up the beautiful continent.  He was recently caught graffiti tagging two buildings in two different cities (although in one of those incidents he was under the careful watch of a police escort).  He’s also been caught red-handed associating with female members of the world’s oldest profession — once coming out of  brothel, and another time being videotaped by a hooker in the wee hours after a long night of getting his winky “biebered”.  I just wish the Biebs could find a nice, young, classy girl his age and settle down.  I hear Miley Cyrus is single.

SEE ALSO: Doctored Strange Love: How I Learned To Stop Worrying And Love Justin Bieber’s Beauty And His Beat

Thanks @justinbieber for the fresh dolla bills pic.twitter.com/GIP9FwbQrL

Previous post:
The Top 5 Surprising Health Benefits Of Moustaches And Beards Next Post:
Einstein And The “OK Plateau”: The Trick To Getting Unstuck & Skyrocketing Your Potential