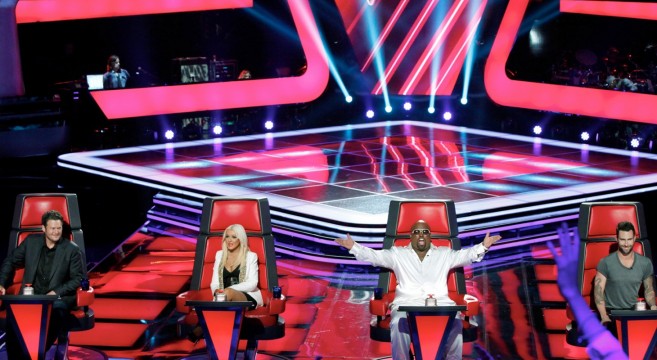 Four Red Chairs And One Billionaire: The Amazing Story Of How “The Voice” Almost Never Happened

In 2010 NBC was in a state of free fall.  The once reigning champion of network television had collapsed to the rock bottom of the ratings pile, and was posting losses of $600 million a year.  They needed a hit and were willing to do almost anything to get it.  In its anemic state, NBC executives, however, were reluctant to take any risks and were instead looking for safe bets to slowly climb their way back to the top.  The quickest way to the top was (and still is for all networks) through cost-effective reality series, but no one had a clue what to do.  The man in charge at the time was NBC Universal CEO Jeff Zucker.  Zucker called up his colleague Paul Telegdy, the network’s head of alternative programming since January 2009, and ordered Telegdy to find a hit — and Telegdy needed to deliver.

Telegdy scoured the globe for new programming ideas, and his attention soon turned to Dutch billionaire media mogul John de Mol, a man renowned for his visionary midas touch with all things reality TV.  De Mol’s resume is the stuff of television legend, sprinkled with such smash hits as Fear Factor, Big Brother, and Deal Or No Deal.  Telegdy was confident he would find his hit with the help of John de Mol, so he quickly travelled to Holland.  Telegdy wanted to see with his own eyes what was apparently a huge hit of de Mol’s in tiny Holland — a little show called The Voice of Holland which de Mol launched in 2010.  “Eager to cut a deal, Telegdy hopped on the last direct flight that would get him to Holland for a Friday evening taping in mid-November,” writes The Hollywood Reporter.  “He was horrified to find himself on a 747 that he insists was ‘at least 50 years old.’  Sitting on the tarmac in panic mode, he called his office and implored them to find another way to get him there.  They couldn’t.  By the time he made the taping, he was running on 40 consecutive hours without sleep.  An hour into the actual show, Telegdy was asleep.  The next day, he met for two hours with de Mol and his team, promising NBC would nurture the concept.”

De Mol, however, was very reluctant.  His experience with American television executives had jaded and infuriated him “because of issues he had earlier with ‘Deal or No Deal’ (frequency of broadcast) and ‘Big Brother’ (CBS wanted to change the format),” writes Tim Baysinger of Broadcasting Cable.  “’John was extremely protective,’ recalls Telegdy, ‘and has been, more than once, maybe twice, shy about being in business with U.S. networks.'”  Telegdy eventually convinced de Mol that NBC would do everything it took to maintain the DNA essence of his baby and make it a bona fide smash hit in America.  De Mol agreed to the deal and they shook hands.

When Telegdy returned to the top brass at NBC with news of his discovery, he had the DVD of the Holland show in his hands, and as one insider described: “It’s always exciting when a development exec has a DVD in his hand and he can’t wait to show it to everyone.”  Executives were intrigued when they watched the footage, but that intrigue quickly turned to terror when they learned of the price tag for the show — at a whopping budget of $2.3 million per episode, the potential U.S. adaptation of The Voice was so expensive many execs in the room thought it was far too risky.  NBC Universal CEO Jeff Zucker, still bitter from being outbid by FOX who won the rights to purchase The X Factor — the show that NBC desperately wanted to buy in order to beat American Idol in the ratings — saw The Voice of Holland adaptation as a risky bet worth taking.  The idea was greenlit, and The Voice was going to happen at NBC.  “[Telegdy] sold it internally and, more importantly, got the huge budget approved,” reveals the insider.  “It was eye-popping.”

Telegdy partnered with Chairman of NBC Entertainment, Robert Greenblatt, and together they realized that in order for The Voice to be huge it needed to have a huge style as well.  In the weeks that had passed, CEO Jeff Zucker took a new job as the new chief of CNN and was replaced by the new CEO of NBC Universal, Steve Burke.  The New York Times spoke with Burke who recalled those early days of development: “[Greenblatt] called me and said, ‘The way to do this is bigger and better: bigger sets, better coaches, spend more money,’ says Burke.  At the time, spending more money was the last thing Mr. Burke wanted to hear.  But ‘the show felt interesting, with very broad appeal,’ he said.  ‘And it was all we had between then and the fall.  I figured this was our one chance.  So I backed Robert, and we bet big on it.  Anticipation started to build internally.  Christina Aguilera, a major star, signed on as one of the coach/judges.  Mark Burnett, who produced ‘Survivor’ and created ‘The Apprentice,’ lavished time and attention on the new production.  ‘This is the first show I’ve worked on in a long time I think can really break through,’ Burnett told Mr. Burke.”

Burke wanted to rush The Voice through to air as soon as possible so it could be the centrepiece of NBC’s fall lineup, but Telegdy and Greenblatt refused.  The pair thought it was a huge mistake to rush it, and instead wanted to take their time and carefully build the quality of the show.  The New York Times writes: “They wanted more time to audition new contestants, and to refine and expand the show.  ‘I said, ‘You’re crazy,’ ‘ Mr. Burke recalled.  ‘Only once in a while do you get a show that breaks out like this.  Plus, we don’t have anything else.  They argued very strongly that we needed more time to find the right singers, retool the show. I said: ‘This is going to be the longest fall in your business career.  It’s going to be so painful.’ ‘  Holding the show until February gave NBC the chance to promote ‘The Voice’ during the Super Bowl (the network, which broadcast the game, gave the show a one-minute spot, which cost it $7 million in revenue) and use the blockbuster sports event, which attracted more than 111 million viewers, as a lead-in to the first episode.  The next night, it featured a two-hour special during the show’s regular Monday time slot and used it in turn to promote a new drama, ‘Smash,’ an expensive scripted series, produced by Steven Spielberg, about the making of a Broadway musical.  ‘The Voice’ drew more than 19 million viewers in the 9 p.m. hour — and beat that week’s episodes of ‘American Idol.'”

Greenblatt got the news around 6:30 a.m.  The Hollywood Reporter writes: “‘I immediately started e-mailing people in the company, saying this is fantastic,” Greenblatt says.  He called Burke in New York, too.  Burke already had the numbers but hadn’t wanted to disturb his new entertainment chief at an ungodly hour,” says Greenblatt.  That day, Burke called Telegdy again.  “In my 32 years in this business,” he told the reality chief, “you’ve just delivered me the best morning I can remember.”  NBC, it seemed, was not out of business.  A few minutes later, Telegdy called an emotional (and incredibly nervous and anxious) De Mol to give him the news.  “I couldn’t see whether there were tears in his eyes, but it sounded like there were,” says Telegdy.  “I was incredibly proud of that moment.”

The Voice continues its reign as the #1 American reality television singing competition.  Not only has the show lifted NBC to new heights of popularity, it has also catapulted its host, Carson Daly, and the show’s four coaches/judges, Christina Aguilera, Cee-Lo Green, Adam Levine, and Blake Shelton, to unprecedented heights as well.  How exactly does that $2.3 million price tag per episode break down when it comes to the coaches’ salaries, you might ask?  According to sources Aguilera is most definitely the Queen of The Voice, pulling down more than $225,000 per hour/episode ($12.5 million per season, with a total net worth of well over $100 million), while the other coaches — Adam Levine, Blake Shelton and CeeLo Green — are getting a measly $75,000 each per hour/episode.  The Voice airs Monday, Tuesday, and Thursday nights on NBC.  In September 2013 The Voice took home a very well deserved Emmy Award for Best Reality Competition Program — something American Idol has never managed to accomplish in its entire thirteen season run. 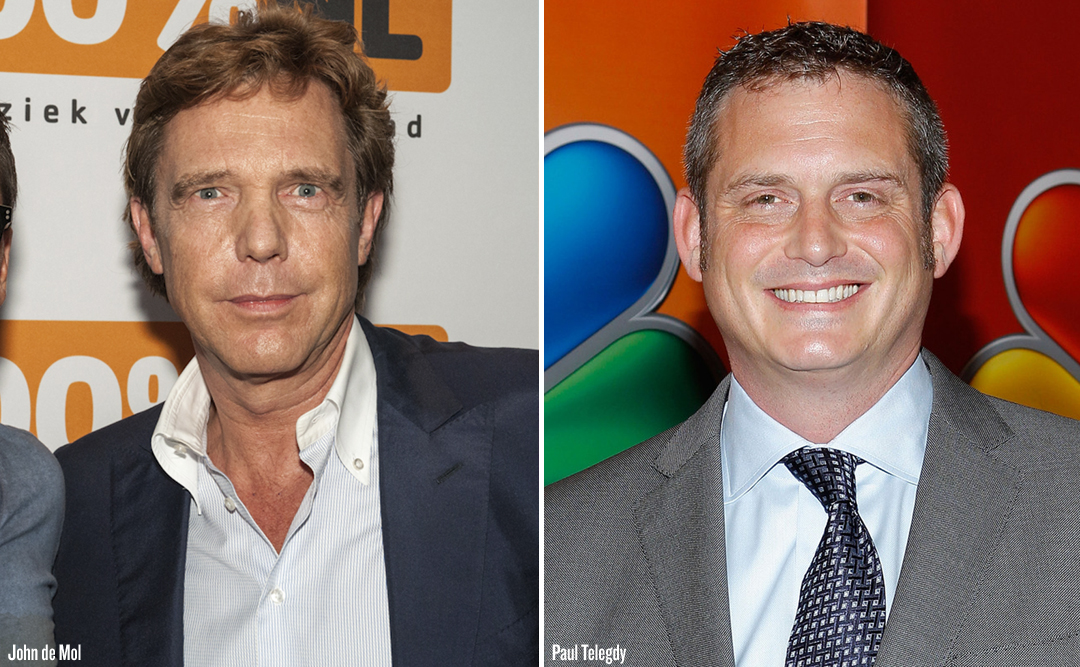 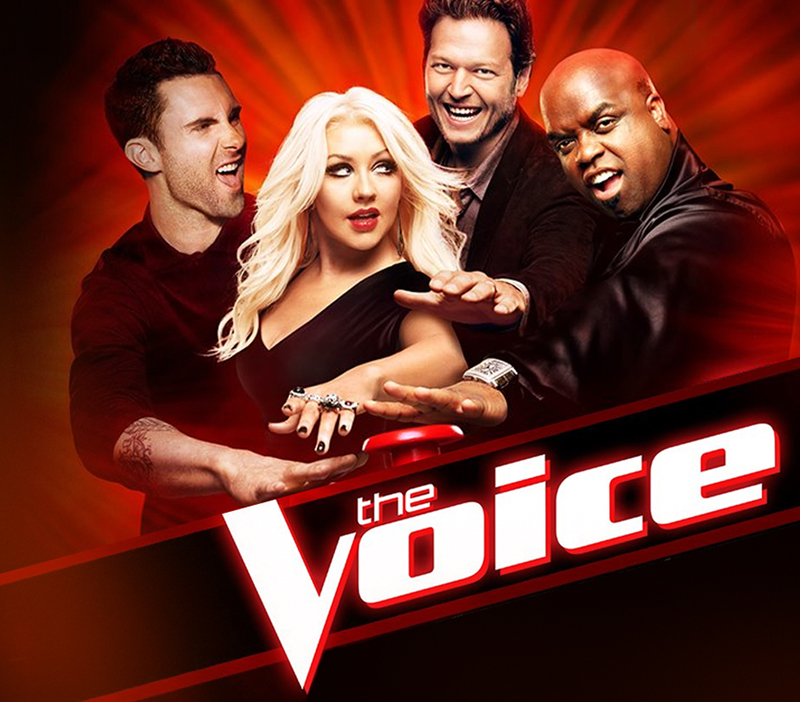