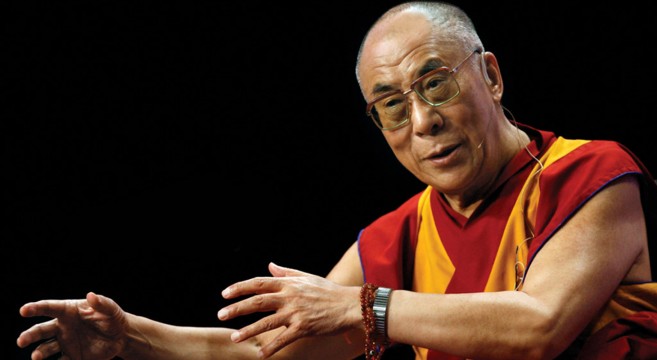 Tenzin Gyatso is the 14th Dalai Lama and the only one who has visited America.  During his trip to New York this past weekend, the 78-year-old spiritual leader spoke six different times.  He also took the time to sit down with Norah O’Donnell of CBS This Morning for a lovely — and oftentimes hilarious — interview.  Among the topics discussed are the following: how anger, hatred, and fear are terrible for human health; his ability to avoid temptation from wine, tobacco, and sex; how divorce and unhappiness go hand-in-hand; how “unbiased love” is the ultimate goal of every human being; and how there might some day soon be a female Dalai Lama — or possibly no Dalai Lama at all should the people of Tibet decide it to be so.  The conversation also ventures into belly laughter territory when the Dalai Lama brings up his weakness for beautiful women, how some wives spend way too much of their husbands’ money, and the segment closes with a hilarious exchange between O’Donnell and her co-hosts Charlie Rose and Gayle King.

Previous post:
MARTINE Releases Evocative New Video For His Single “If” Next Post:
Digital DNA: A Mindblowing Conversation About The Future Of Synthetic DNA In The Digital Age