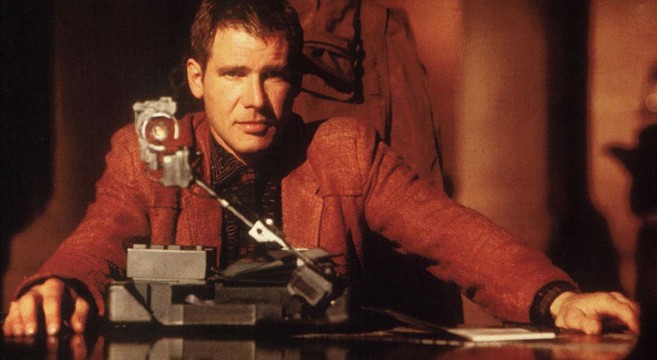 In the world of press junkets, Harrison Ford is notorious for being one of the grumpiest and most stubborn actors any entertainment journalist could ever possibly encounter in an interview.  So kudos to IGN for having the balls to bring up the topic of Ridley Scott’s upcoming Blade Runner sequel in their recent sit-down with Harrison Ford who was there to promote his new sci-fi film Ender’s Game.  Much has been made of Ridley Scott‘s revisiting of the Blade Runner story, and in a May 2012 interview with The Independent during a promotional tour for PROMETHEUS, Scott discussed the project: “It will be a sequel, he suggests, not a prequel or a remake — but Harrison Ford is unlikely to feature prominently.  ‘I don’t think it’ll be Harry [starring].  But I’ve got to have him in it somewhere.  That’d be amusing.'”

In the IGN interview which you can watch below, Ford reveals he’s been in talks with Ridley about reprising his role as Deckard: “We’ve been chatting about it.  I remember it with complication, but I’m not there to generate nostalgic moments, I’m there to do a job of work. I quite understand that everybody has an ambition when they come and do a film, and everyone’s ambition may not be focused on the same thing,” he said.  “I truly admire Ridley as a man and as a director, and I would be very happy to engage with him again in the further telling of this story.”

Ford and Scott had a well known difficult working relationship while making the iconic 1982 masterpiece, but it sounds as if that’s all water under the bridge.  In 2013, Scott has never been a more impressive director than he is right now, and it’s going to be an absolute thrill to see where he takes us next on the Blade Runner journey.   The 1982 masterpiece was an adaptation of the 1968 Philip K. Dick novel Do Androids Dream Of Electric Sheep?, and Scott and original Blade Runner scribe Hampton Fancher, will be revisiting this original source material to build the story for the sequel.

Philip K. Dick’s original storyline follows Rick Deckard, a bounty hunter of androids, and the novel is set in a post-apocalyptic near future, where Earth and its populations have been damaged greatly by Nuclear War during World War Terminus. Most types of animals are endangered or extinct due to extreme radiation poisoning from the war.  To own an animal is a sign of status, but what is emphasized more is the empathic emotions humans experience towards an animal.  Deckard is faced with “retiring” six escaped Nexus-6 brain model androids, the latest and most advanced model.  Because of this task, the novel explores the issue of what it is to be human.  Unlike humans, the androids possess no empathic sense.  In essence, Deckard probes the existence of defining qualities that separate humans from androids.

Ridley Scott is producing the sequel with Alcon’s Broderick Johnson and Andrew Kosove as well as Bud Yorkin and Cynthia Sikes Yorkin.  Frank Giustra and Tim Gamble, who run Thunderbird Films, are executive producing.  Fancher is repped by APA and attorney Matt Saver.  No word yet on whether or not Vangelis is returning to score the sequel, but I certainly hope so.  Next up for Ridley Scott is The Counselor, a morality tale about a lawyer who foolishly dabbles in the drugs trade.  The script is the first by celebrated novelist Cormac McCarthy, and stars Michael Fassbender, Brad Pitt, Cameron Diaz, Javier Bardem, and Penelope Cruz.  The Counselor opens in North America on October 25th.