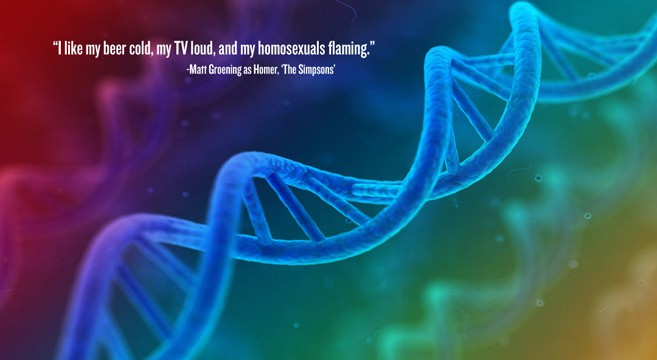 The WOW Files: Breakthrough In Epigenetics Discovers The Evolutionary Function Of Homosexuality

For a while now, researchers have known that the genes of human DNA strand inside every living cell comprised only 2% of the DNA’s make-up.  The other 98% of the DNA, which came to be known as “junk DNA” or “dark matter” was thought to be relatively insignificant and dormant because it doesn’t code for proteins.  Recently, however, scientists have realized this dark matter may be as important — if not more significant — than the individual genes themselves.  This field of research is called epigenetics.

Think of your own DNA as the Empire State Building, and each light inside each room of the tower represents one of your genes.  Now imagine each of those individual lights in each individual room doesn’t just have one light switch controlling it — it actually has several which control the brightness and color of the light.  Your epigenetics are the powerful dimmer switches and governors of your genetic self, and they are turned up and down by the trillions of factors you are exposed to in the natural world throughout your entire life beginning with your development in utero.

Epigenetics is one of the most profound and revolutionary fields of scientific research, and you can look forward to hearing more and more epigenetic discoveries and breakthroughs in the years and decades ahead.  Today, one of those breakthroughs was announced and it deals with the complex mystery of homosexuality.  A team of researchers from the National Institute for Mathematical and Biological Synthesis are certain their research in epigentics has finally discovered the reason why homosexuality is essential to the survival of nearly every single species on Earth, and the mechanics of how and why homosexuality is passed on from parent to child:

A group of scientists suggested Tuesday that homosexuals get that trait from their opposite-sex parents: A lesbian will almost always get the trait from her father, while a gay man will get the trait from his mother.  The hereditary link of homosexuality has long been established, but scientists knew it was not a strictly genetic link, because there are many pairs of identical twins who have differing sexualities.

Scientists from the National Institute for Mathematical and Biological Synthesis say homosexuality seems to have an epigenetic, not a genetic link.  Long thought to have some sort of hereditary link, a group of scientists suggested Tuesday that homosexuality is linked to epi-marks — extra layers of information that control how certain genes are expressed. These epi-marks are usually, but not always, “erased” between generations. In homosexuals, these epi-marks aren’t erased — they’re passed from father-to-daughter or mother-to-son, explains William Rice, an evolutionary biologist at the University of California Santa Barbara and lead author of the study.

Rice and his team created a mathematical model that explains why homosexuality is passed through epi-marks, not genetics. Evolutionarily speaking, if homosexuality was solely a genetic trait, scientists would expect the trait to eventually disappear because homosexuals wouldn’t be expected to reproduce. But because these epi-marks provide an evolutionary advantage for the parents of homosexuals: They protect fathers of homosexuals from underexposure to testosterone and mothers of homosexuals from overexposure to testosterone while they are in gestation.  (NIMBioS; Citation: Rice WR, Friberg U, Gavrilets S. “Homosexuality as a Consequence of Epigenetically Canalized Sexual Development”. The Quarterly Review of Biology. Published online December 11, 2012).

The researchers say the results still needs to be tested on real-life parent-offspring pairs, but this epigenetic link makes more sense than any other explanation, and the team has mapped out a way for other scientists to test their work.  Within six months this exciting discovery will be proven or not proven, but all indications are that one of the biggest mysteries in science has finally been solved.  You can read the full story by visiting USNEWS.com and EurekaAlert.org.

Previous post:
The Trailer For Zack Snyder’s “MAN OF STEEL” Just Gave Me The Goosebumps (In All The Right Places) Next Post:
The WOW Files: Enter HEATHERED PEARLS’ Debut Album “Loyal” And Merge With The Infinite