When director Luca Guadagnino and producer Tilda Swinton released their passion project I Am Love in 2009 it marked the culmination of an 11-year journey.  I Am Love remains one of my most cherished films of all time, and I will forever be fascinated by the stories that emerge from its creative process.

One of Luca’s and Tilda’s biggest personal achievements of the film was convincing Pulitzer Prize-winning American composer John Adams (born February 15, 1947) to allow them to use his music.  As it turned out, it wasn’t that difficult.  Adams, who is notoriously reclusive, fell in love with the project and Luca and Tilda pretty much fainted when he gave his full blessing and opened his catalogue for them to use however they wished.  Adams’ 1985 composition Harmonielehre became the main theme of the film, in particular the third movement entitled “Meister Eckhardt and Quackie”.  What Luca and Tilda may not have realized at the time was what inspired Adams to write Harmonielehre in the first place.

A few minutes ago while listening to Julie Nesrallah’s Tempo on CBC Radio 2 I was blown over when she began to tell the story of how the composition was inspired by a series of dreams Adams had more than 25 years ago.  In 1985 Adams had a dream one night that he was driving across the San Francisco – Oakland Bay Bridge and saw an oil tanker on the surface of the water abruptly turn upright and take off like a Saturn V rocket (from the Apollo missions).  This dream and the following composition of the piece ended a writer’s block Adams had been experiencing for eighteen months, and the movements reflect his situation, representing, respectively, liberation (I), spiritual sickness (II), and grace (III).  The first movement entitled was inspired by the Saturn rocket dream, and the second movement, entitled “The Anfortas Wound” is based on the legend of the Fisher King.

But the real star of I Am Love’s score is the the third movement of Harmonielehre entitled “Meister Eckhardt and Quackie” which, according to Adams, is inspired by a dream that he had about his daughter Emily (whom he and his wife had nicknamed “Quackie”) in which young Emily rides through outer space upon the shoulders of 14th-century mystic Meister Eckhart.  True story! (whatever you were smokin’ that night John, please let me know okay?  Thanks).  In this movement, components of minimalism return with the return of repetitive rhythms and short snippets of melody, and the work ends with a triumphant affirmation of tonality with an “empty” fifth chord on E flat.

A truly remarkable story about a truly amazing composition.  So sit back, take a deep breath, close your eyes, and allow yourself to blast off to a truly magical place by pressing play on John Adams’ “Meister Eckhardt and Quackie” below.  As for me, whenever I listen to this score my imagination immediately gets taken away to the Villa Necchi Campiglio house where I Am Love was filmed.  Together me and the hotness that is Flavio Parenti (who plays Tilda’s son Edoardo Recchi Jr. in the movie) will take a midnight skinny dip in the Villa’s pool, followed by a passionate night of Harmonielehrizing in every single room of the house.  And under starry moonlit Milan sky Flavio will look deeply in my eyes and whisper with his gorgeous Italian lips and goosebumping sexy-as-hell Italian accent: “I Am Love You Brent.” 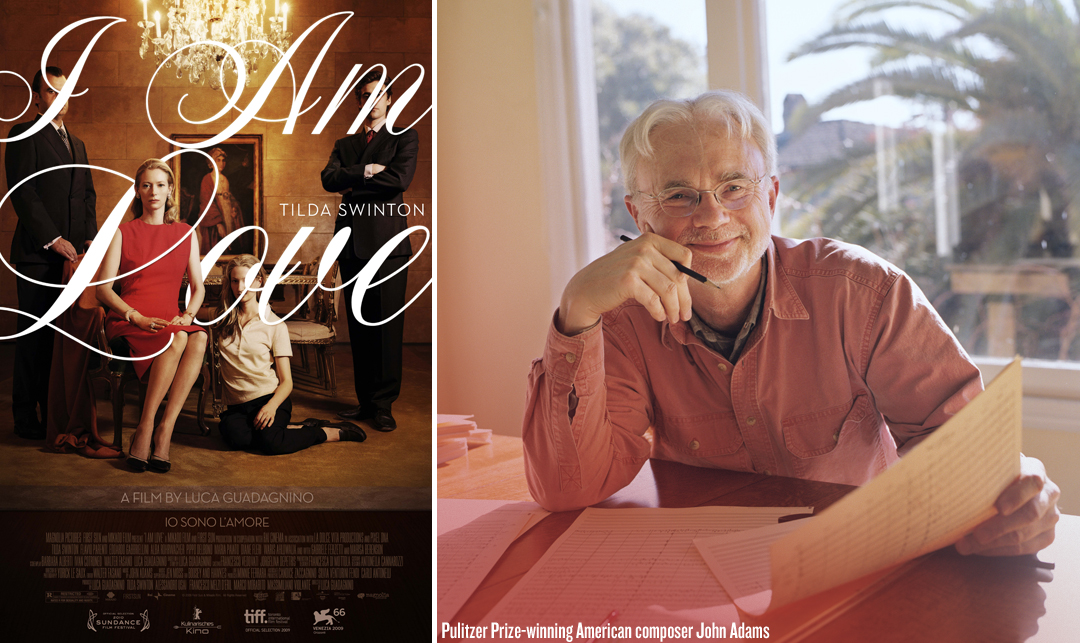