An anthropology student is earning high praise from his colleagues after he made a surprising discovery while looking closer at a rock that had been sitting on a laboratory shelf for nearly four years at the University of the Witwatersrand in Johannesburg, South Africa.  He noticed a very subtle mark on the rock, and after careful consideration, he believed it was a tooth.  Scans later showed that the rock contains two-million-year-old fossils that will “almost certainly” make one Australopithecus sediba specimen “the most complete early human ancestor skeleton ever discovered,” anthropologist Lee Berger said in a statement Thursday.  The following is an excerpt from National Geographic‘s story:

A. sediba is one of the newest additions to the list of early human ancestors and also one of the most enigmatic hominins ever discovered.  Studies have shown that the species possessed an unusual mix of primitive and or humanlike traits.  For example, scientists think A. sediba could stand and walk upright but that it still spent some time in trees.  Additionally, the creature had a relatively large brain and surprisingly agile hands, suggesting the species may have been capable of crafting and using stone tools.  But there are still a lot of lingering questions about A. sediba and early hominins in general—questions that paleontologist Scott Simpson thinks the new bones could help resolve.  “One of the things we’re still working out is the shape of [A. sediba’s] rib cage. It’s unclear how the shape of the rib cage evolved in hominins, and also what the relationship of the rib cage shape is to upper limb function,” said Simpson, of Case Western Reserve University in Ohio, who’s not involved in the project.  The vertebrae are also valuable finds, Simpson added, because they’re relatively fragile and tend to degrade quickly or get eaten before the bones can fossilize.  “It would be nice to get these rare bones,” he said. “The more bones, the better.”

You can read the entire story by visiting National Geographic.  In the coming months, the vertebrae and other bones will slowly be freed from the rock at the Maropeng Visitor Center in Gauteng, South Africa, Berger’s team is constructing with the help of the National Geographic Society. (National Geographic News is a division of the Society.)  “The world is going to be able to watch and interact live as we expose this discovery,” he said.  The group is also coordinating with as yet unspecified museums around the world to create virtual “outposts” where the public can go to not only watch the excavation live but also control cameras and microscopes that will be set up in the lab.

The rock which was sitting on that lab shelf came from a dig back in 2008 at a site just north of Johannesburg.  Peter Schmid Ph.D. (anthropologist, Senior Lecturer at the Anthropological Institute at the University of Zurich, and Curator of the Museum of Anthropology of the University of Zurich) and his team had been (and still are) excavating the site for the past twelve years, and in 2008 they came across one of the most profound discoveries in history which overthrew decades-old theories about our origins.  The bones and fragments of this new species they had discovered, showed both human and australopith, or pre-human, characteristics.  And now with the discovery of the missing bones inside the long-forgotten rock from that dig, we now have the oldest “missing link” skeleton which perfectly connects us to our prehistoric ancestors.  Watch as Peter Schmid explains the significance of the discovery in this TED Talk below.  And keep in mind: this lecture was recorded on October 23, 2011.  Even Schmid himself had no idea of the treasure that was sitting inside his rock back in the lab, just waiting to be discovered. 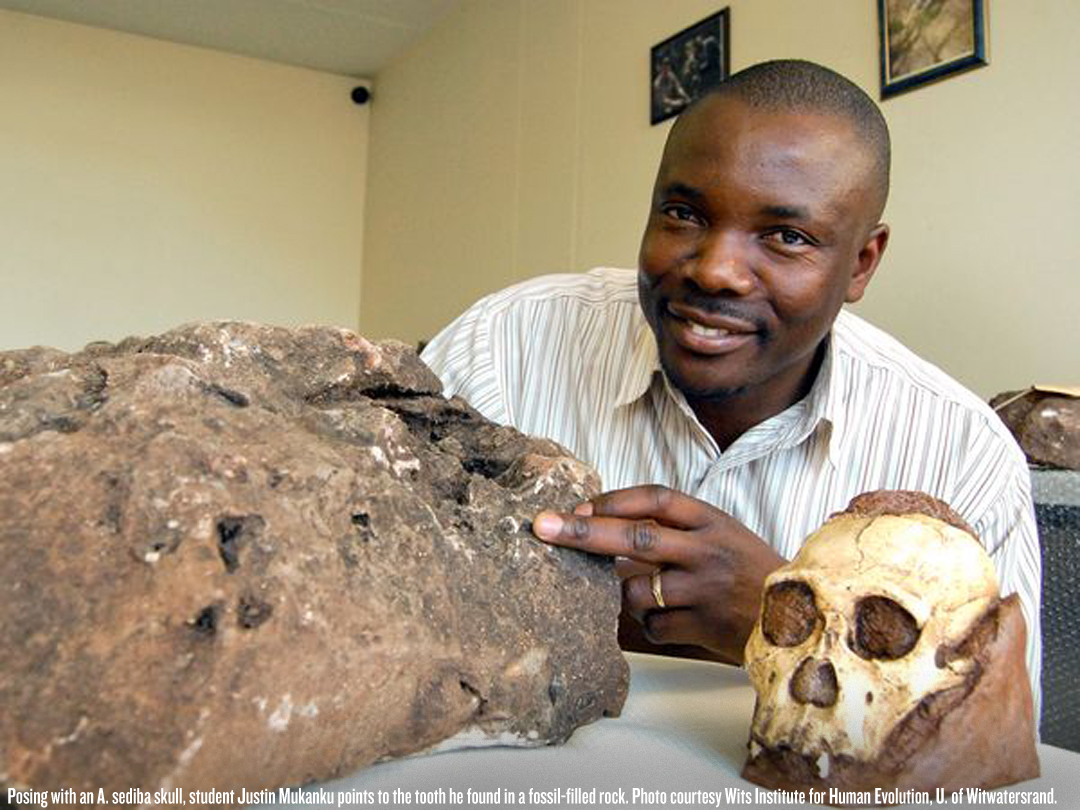