The first time I heard of this story was last night around 9pm via Towleroad, and I couldn’t even finish watching the video — it was too painful.  Since then, the video of 68-year-old grandmother Karen Huff Klein being viciously bullied by a group of male and female students has gone viral with more than one million views.  Karen was a bus driver for 20 years for the Greece Central School District in upstate New York, and for the past three years she has worked as a bus monitor.  The profanity and horrific verbal attack she endured has captured the attention of people from around the world who have reached out to Karen with words of support through her Facebook page.  Greece Central School District officials contacted police on Wednesday morning after seeing the video, and students believed to have been involved have been questioned by school and police officials, according to a report by the Democrat & Chronicle. Officials are deciding whether to bring any formal charges.

In an interview with Matt Lauer this morning on The TODAY Show, Klein commented: “It made me feel really terrible, but I will get over it. I’ve gotten over everything else.”  Karen is hearing-impaired and at the time of the incident she was unable to hear many of the taunts, but has since seen the video in full and was even more shocked and hurt by what had happened.  “I think they’re narrow-minded monsters, to be perfectly honest with you,” replied Matt Lauer of the kids on the bus. “I think their parents should be ashamed of them.”  Along with the tremendous outpouring of support from people worldwide, an online fund-raising drive to give Karen the vacation of her dreams is currently underway. By mid-morning Thursday, nearly 8,000 donors had contributed over $196,500 for Klein (as of 9:10am Thursday), who earns $15,506 a year.

A 1962 graduate of Olympia Greece High School and a grandmother of eight, Klein’s husband passed away 17 years ago and she still resides in Greece, New York.  “We can say that students found to be involved face strong disciplinary action,” Greece Central School District Assistant Superintendent Deborah Hoeft told reporters Wednesday.  One option would be to track down each one of these miniature fuckfaces and beat the living shit out of them with a leather strap.  Then I’d drag them each by the hair all the way to China and force them to work 25-hour days in a sweat shop where they would be fed bat shit and dog hair three times a day, with a few litres of cat piss to wash it all down.  Perhaps this would help teach them how blessed they are to have access to an education in the first place, and with any luck they might even grow their own souls in order to know what it means to be a human being.  And as for their parents — I’d beat the living shit out of them with a leather strap too.

To contribute to Karen’s fundraiser simply head over to Love For Karen Klein on Indiegogo (NOTE: the site has been crashing occasionally due to high traffic), and you can send Karen a message on her personal Facebook page as well as on a newly established Kindness For Karen page on Facebook. You can also contact Greece Central School District Assistant Superintendent Deborah Hoeft at (585) 966-2000 to make sure these demon babies get what they deserve.

To read Michael K’s recommendation for what these kids should get as punishment visit Dlisted. 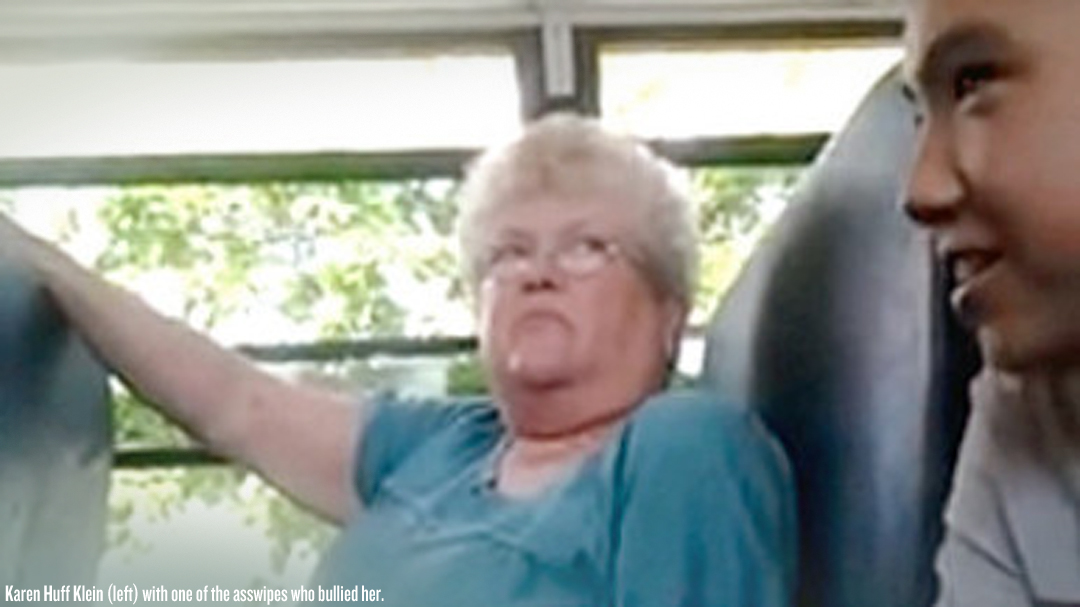 Sources: Dlisted and The TODAY Show

Previous post:
Ann Curry Almost Certainly To Be Replaced By Savannah Guthrie As New Co-Host Of “The TODAY Show” Next Post:
Charlie Rose Sits Down With Hillary Clinton For A Juicy Talk About All Things State Department