The WOW Files: Watch This Fascinating Ghost Doc About Sleep Paralysis And The “Old Hag Syndrome”

Last week my friend Stephanie sent me a link to one of the most fascinating paranormal documentaries I have ever encountered.  Before she sent me the link, we exchanged a lengthy thread of emails where she introduced me to a ghostly phenomenon which I had never heard of before — Old Hag Syndrome induced by sleep paralysis.  The phenomenon exists in nearly every corner of the world, and those who experience it awake to find their bodies and vocal chords completely paralyzed.  An overpowering sense of fear takes over his/her mind and body as the figure of a deathly and cadaverous old woman sits on their chest, and in some cases even strangles her victims.  Skeptics almost always cast aside these experiences as figments of the imagination, but Old Hag Syndrome has occurred — and continues to occur — in countries as disparate and dislocated as their respective cultures.  In surveys from Canada, China, England, Japan and Nigeria, 20% to 60% of individuals reported having experienced sleep paralysis at least once in their lifetime.  In Finnish and Swedish folklore, sleep paralysis is caused by a mare, a supernatural creature related to incubi and succubi, and the term Old Hag Syndrome first emerged from British and North American folklore.  In Fiji, the experience is interpreted as kana tevoro, in African communities as “the Devil on your back”, in Islamic cultures the phenomenon is called karabasan, in Chinese culture it is widely known as 鬼壓身/鬼压 (pinyin: guǐ yā shēn), in Japanese culture it is referred to as kanashibari, in Persian culture it is known as bakhtak, in Nepal it is known as Khyaak, and on and on and on.  You can read more by visiting Wikipedia and by watching the documentary below.

SEE ALSO: “Ghost Adventures” Crew Member & Wife Contacted By Dead Daughter, Leads To Fascinating Special That May Change Everything You Thought You Knew About The Afterlife 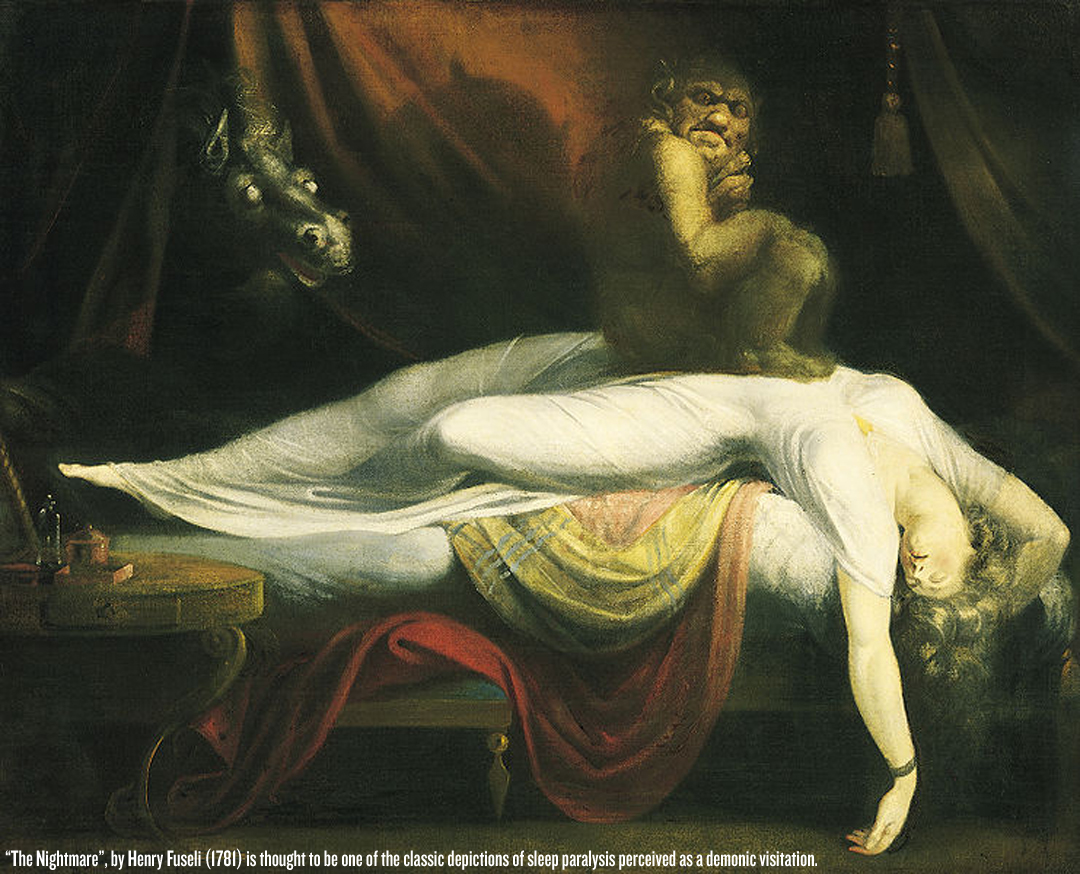 Previous post:
Sigur Rós Release Brilliant And NSFW Video For “Fjögur Píanó” Starring None Other Than Shia LaBeouf Next Post:
Listen To A Peacefully Wild Stream Of ECHO LAKE’s “Wild Peace” Before Its Release On June 26th