Dream Of A Great Career? Watch Innovation Guru Larry Smith Explain To TED Why You’ll NEVER Have It

In a recent article written for CNN, Larry Smith presents his brand new TED Talk where he explains why most people will never ever have the career they’ve always dreamed of.  Smith, a leader in the economics of innovation and entrepreneurship, explains several reasons why the overwhelming majority of people crash and burn on their quest to find their dream career.  Each of us have realized at one point or another that having a strong passion is the most important thing to have if you want an incredible career, but Smith doesn’t whitewash around this mega point like other experts.  He’s not afraid to be blunt and tell you directly to your face that you’re lazy, you give up to easily, and you rely too much on the conventional frameworks of the world around you when building your career.  The following are 3 excerpts from his essay written for CNN:

“… Many people fail to have great careers because they make excuses to avoid taking action. They dismiss the importance of passion to great careers by claiming that passionate people are abnormal. By contrast, in most people’s eyes, those who are normal only need to work hard and they will have at least a good career. But good jobs are disappearing, as bad and great jobs squeeze out the middle range. Hard work alone buys little advantage.

… Nevertheless, many people struggle to find their passions. What mistakes are they making?  Often they assume that finding one’s passion is a matter of luck. They see that some people found their passions as children. Often others seem to just trip over their passion as they move into adulthood. The process seems random and difficult to view as a methodical process of search.

… Many people fail to find their passion because they either fail to search methodically or search persistently. Some will simply not commit the time and energy to a search that can often be frustrating. In fact, they want their “destiny” to find them; they do not want to find it themselves. You cannot find your passion idly staring into space, hoping for it to appear as a revelation, from one book, article, blog posting or casual conversation. Those who search and find their passion place themselves in intensely stimulating environments, and stay there until the job is done. It can be intellectually exhausting.”

To hear the cold, hard truth about why you’re a lazy ass bitch, listen to Larry’s TED Talk below.  Larry Smith is an Adjunct Associate Professor of Economics at the University of Waterloo in Canada, and recipient of the University’s Distinguished Teacher Award.  He specializes in the economics of innovation and entrepreneurship, and advises students who are about to start their own ventures.

NOTE: THE CAMERA WORK IN THE TED VIDEO BELOW IS SO AWFUL IT’S UNWATCHABLE.  I RECOMMEND JUST LISTENING TO THE AUDIO.  SMITH ALSO REFERENCES STEVE JOBS’ 2005 STANFORD COMMENCEMENT ADDRESS AND I HAVE EMBEDDED IT BELOW AS WELL. 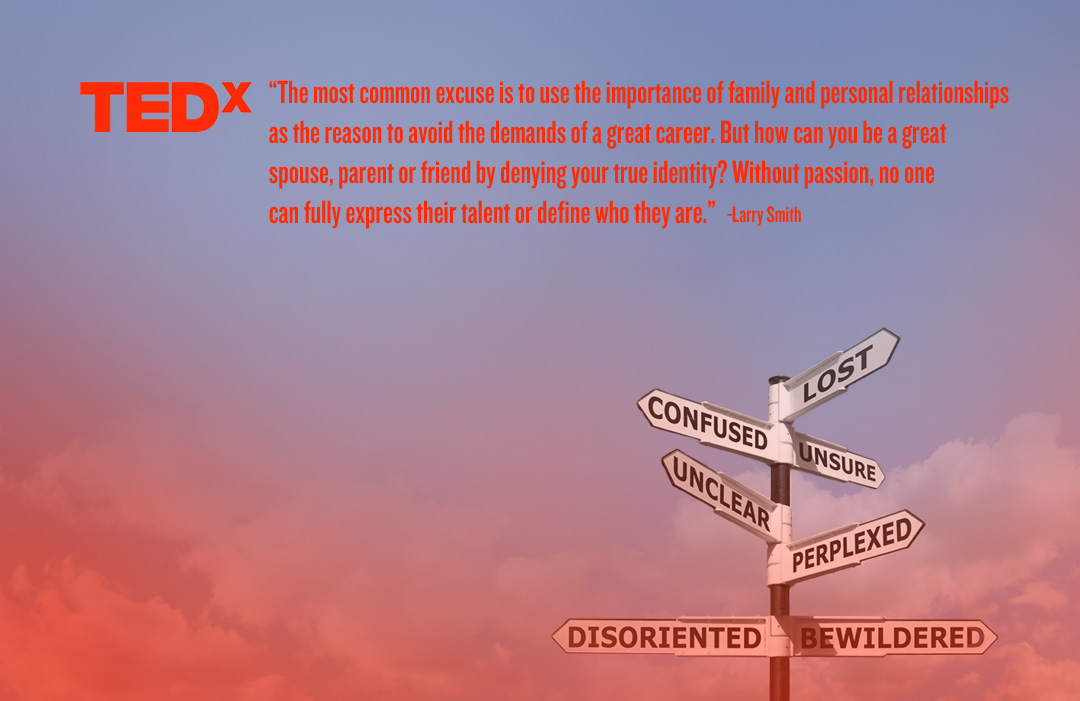