The other day I got some of my chest hair stuck in my zipper and I nearly cried like a baby.  If 81-year-old Laverne Everett had been by my side, she likely would have slapped me upside the head with, “Don’t be such a f@#kin’ baby!”  With more balls than a shopping mall full of tweeting teenage boys, Everett wanted to do something special last year for her 80th birthday.  So she decided to take a tandem skydive, and what happened next has made news around the world.

Crouched along the threshold of the plane’s door, her feet were stuck and she needed some help.  Her diving instructor, whom she was clipped to, kicked out her feet so they could dive head first into what promised to be one of the highlights of her life.  The highlight turned out to be less about excitement and more about sheer terror when she and her partner did a few somersaults and she began slipping from her harness.  As I was watching the video for the first time last week, my own balls took their own dive right up into my stomach, and after a shiver or two I thought this was going to have a tragic end.  Sure enough, Laverne’s diving partner landed her safely and Laverne’s 80th birthday turned out not to be her last.  Yesterday she paid a visit to The TODAY Show where she told Matt Lauer the story of what happened, how she’s already planning her next adventure inside a race car, and laughed off Lauer’s suggestion that she might want to consider taking up knitting: “Knitting is boring!” she replied.  Lauer didn’t speak with the diving instructor who was also present, but I’m pretty sure he’s still curled up in the fetal position under his blanket sucking his finger.

Appropriately enough, The Guardian just published an interesting story from professor Tom Kirkwood which reveals how the 80-plus generation are much, much happier than experts had previously thought.  You can read it by CLICKING HERE.  And if you love that, you’re going to do somersaults of your own when you check out this story: “92-Year-Old Woman Inspires The World With Her Mind, Body And Spirit“. 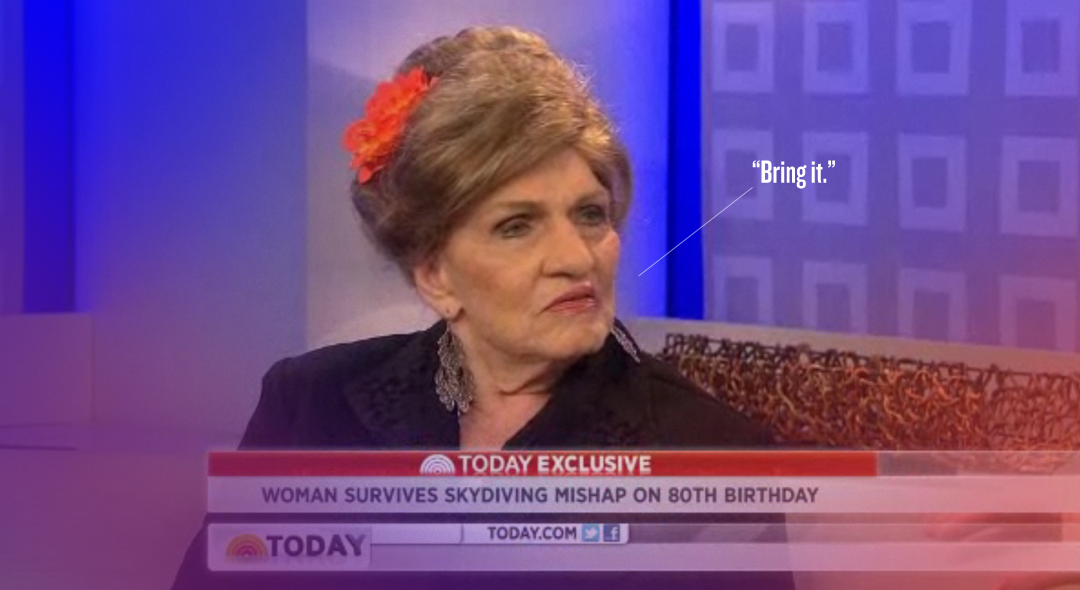