It was a huge day for the art world last Wednesday when on day 2 of Sotheby’s auction in London, a whopping 41 works of Impressionist and Modern art sold for £78.9 million ($125 million).  For the first time in ages, the highest price in a sale of Modern and Impressionist art went to an Impressionist landscape instead of some 20th century avant-garde painting.  Claude Monet’s (1840-1926) depiction of the snowy road leading to Giverny sold for £8.2 million ($10.55 million) which was far beyond the estimate of £4.5 million to £6.5 million (there was also a sale charge in excess of 12%).  L’Entrée de Giverny en Hiver (painted in 1885) which had never been offered at auction before, had been out of the market since 1924.  It appeared in a museum show only once before at the “Claude Monet” retrospective in 1930 at the Musée de l’Orangerie in Paris.  L’Entree de Giverny en Hiver had not suffered from multiple cleanings and varnishings which weaken similarly iconic works that are moved around often.  It was pretty much in perfect condition.  As The New York Times writes: “The delicate shades of salmon pink, grayish blue and deep maroon or blackish purple are intact. Not least, the landscape is charged with the new energy that Monet infused into his brushwork in the 1880s. This made the picture worth every penny of the seemingly large amount.” To learn about all of the fascinating surprises (and disappointments) from last week’s incredible Sotheby’s auction be sure to visit The New York Times.  To learn more about the extraordinary life and work of Claude Monet CLICK HERE.  Giverny is a tiny, stunning commune in northwestern France which is best known for being the home and garden abode of Monet. 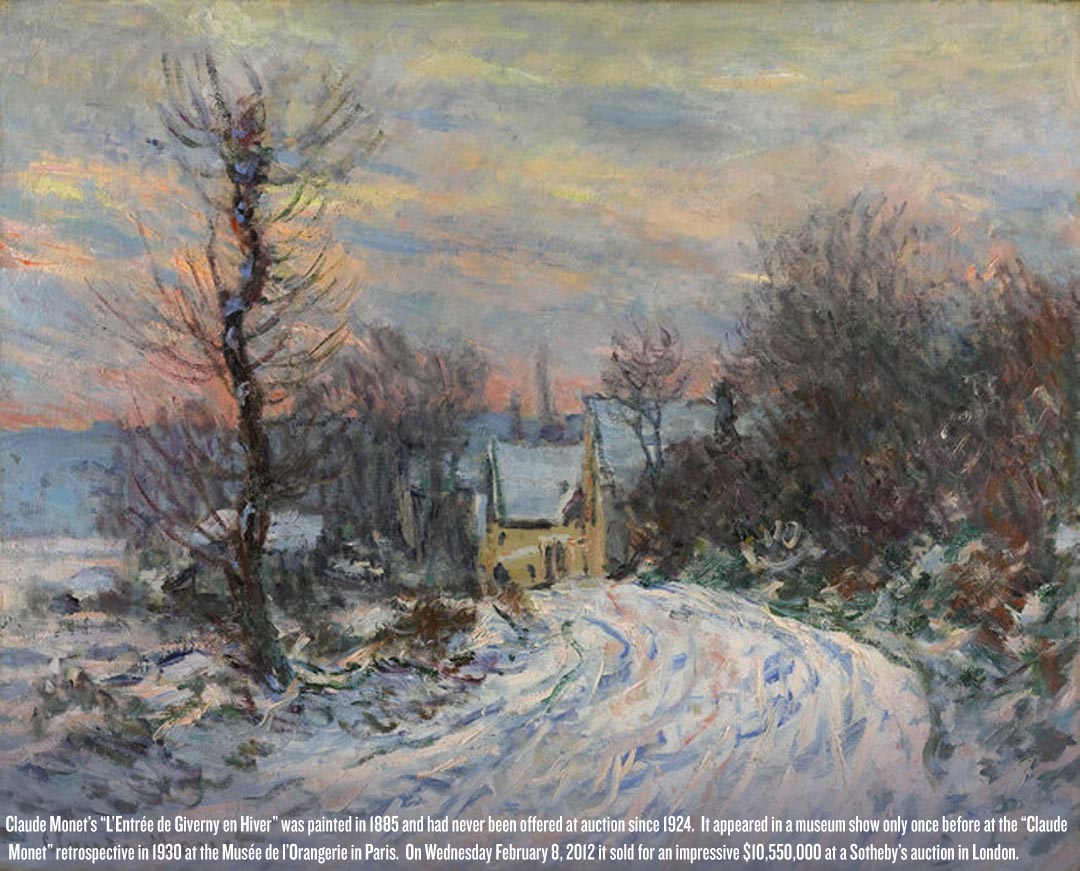 Previous post:
Frank Lloyd Wright And Philosopher Alain de Botton’s Beautiful “Temple For Atheists” In Central London Next Post:
The WOW Files: At $1,400,000 The Magnificent Aston Martin One-77™ Is Easily Worth Every Penny