First published in The New York Times (January 29, 2012) by Ian Austen ☛  The It began with a puzzling and grisly discovery in 2009: a car submerged in a 19th-century canal lock with the bodies of three teenage girls and a middle-aged woman inside.  On Sunday, the father, the mother and a brother of the girls were each convicted of four counts of first-degree murder.  The verdict concluded a complex, three-month trial in which prosecutors described the crimes as “honor killings.” The defendants — Mohammad Shafia, 58; Tooba Yahya, 42; and their son Hamed, 21 — and the victims belonged to a family of Afghans who had moved to Canada two years before the crime, in June 2007, under a program for affluent immigrants.  Both the woman in the car, Rona Amir Mohammad, and Ms. Yahya were married to Mr. Shafia.   During the investigation of the deaths, police wiretaps recorded Mr. Shafia repeatedly expressing the view, often in graphic, vulgar language, that the girls had disgraced his family by dating and by wearing revealing clothing.  Other evidence showed that at least one of the dead girls was so frightened of her father that she sought help from the police to escape the household and be placed in foster care with her sisters, without success.

Mr. Shafia’s solution, prosecutors said, was to murder three of his seven children and Ms. Amir Mohammad, and to try, improbably, to make it look like an auto accident; they presented evidence that the car in the canal, a Nissan Sentra, was pushed there using the family’s Lexus, and that someone in the household had searched the Internet for advice on how to conduct a murder.   The jury delivered its verdict after 15 hours of deliberation. Afterward, Justice Robert L. Maranger of the Ontario Superior Court of Justice raised the cultural issues surrounding the case, which, while rarely mentioned directly in court, had become a widespread topic of discussion in Canada, particularly in Quebec, where the family lives.

“It is difficult to conceive of a more despicable, more heinous, more honorless crime,” the judge told the defendants in a courtroom in Kingston, Ontario. “The apparent reason behind these cold-blooded, shameful murders was that the four completely innocent victims offended your completely twisted concept of honor, a notion of honor that is founded upon the domination and control of women.”  All three defendants said they were innocent.  Ms. Yahya said in court after the verdict: “I am not a murderer and I am a mother — a mother!”  Her lawyer, Andrew Crowe, said she would appeal.  Under Canadian law, first-degree murder carries a compulsory sentence of life in prison, with no chance of parole for the first 25 years.  A Parks Canada employee spotted the Sentra in the Rideau Canal when he arrived for work at a lock station near Kingston in June 2009.  Inside were Zainab, Sahar and Geeti Shafia, ages 19, 17 and 13, and Ms. Amir Mohammad, 53, who entered Canada claiming to be Mr. Shafia’s cousin when in fact she was his other wife.

The family stopped in Kingston on the way back to their home in Montreal after a brief holiday trip to Niagara Falls; they bought the Sentra secondhand the day before the trip.  Mr. Shafia and Ms. Yahya told police and reporters that Ms. Amir Mohammad and the girls had taken the car on a late-night joy ride organized by Zainab, who did not have a driver’s license.  But the police were immediately suspicious.  Evidence presented at trial did not establish exactly how the woman and three girls died.  But there were indications that the four victims were already dead when the car went into the canal.  The prosecution built part of its case on conflicting statements and missteps by the defendants — they booked accommodations for only six people in Kingston, even though the family numbered 10 before the killings — but the most compelling evidence came from police wiretaps.

“I say to myself, ‘Would they come back to life a hundred times, for you to do the same again,’ ” Mr. Shafia said about his daughters on one recording. “They violated us immensely. There can be no betrayal, no treachery, no violation more than this.”  Defense lawyers argued that the remarks were prompted by the discovery days after the deaths of a photo album showing the girls with boys, although the family displayed what appeared to be the same album to television crews shortly after the deaths.  A diary kept by Ms. Amir Mohammad, who apparently could not bear children, indicated that Ms. Yahya treated her as a servant, and described beatings by Mr. Shafia and by his son Hamed when Mr. Shafia was away on business trips.  Evidence at trial suggested that he was also brutal to the girls and feared by them. 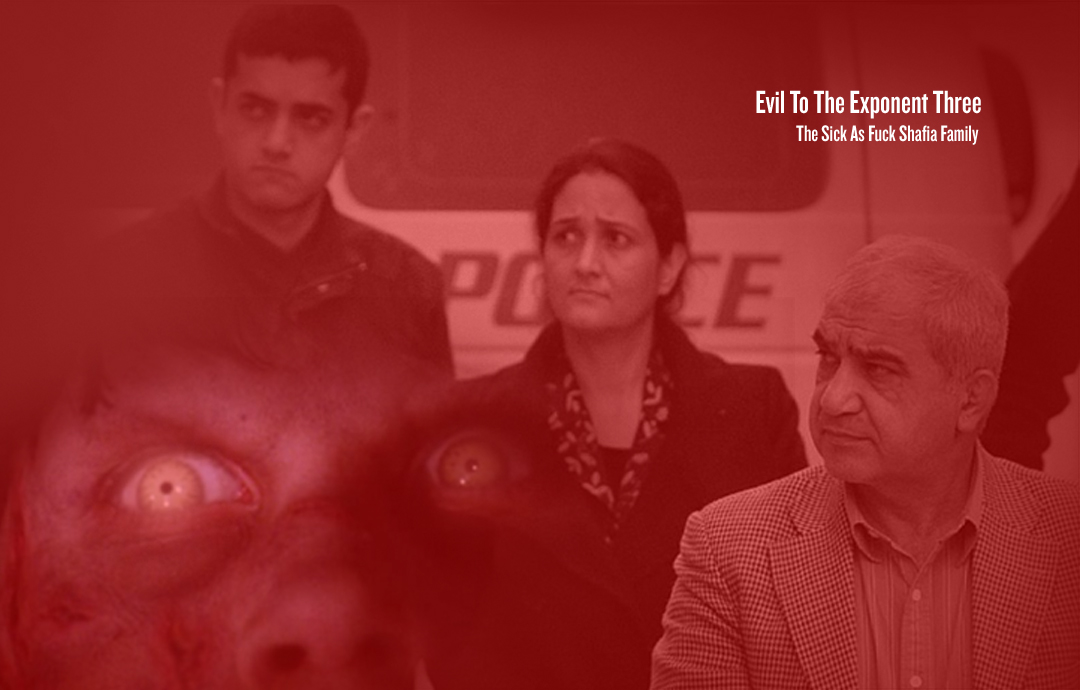 Previous post:
Charlie Rose Confesses His Passionate Love For Tilda Swinton In The Best Damn Interview Of All Time Next Post:
The Future Of Folk: Birkwin Jersey Gives Away His Gorgeous “Old Hands” EP (And More) For Free