Mary Duke Biddle Trent Semans was one of America’s most fascinating philanthropists.  A diehard supporter of the arts, Mary was the heiress to the vast Gilded Age fortune built on tobacco by her great grandfather, Washington Duke, a Confederate soldier who returned home after the Civil War and planted a crop of tobacco. With his sons, Duke helped build the worldwide popularity of cigarettes, and also endowed a small Methodist college that would eventually become the world-renowned Duke University.  Semans was a patron of the arts and charities, as well as a crusader for equal rights for women.  For decades, she helped run The Duke Endowment, a Charlotte-based foundation founded by her great uncle, James B. Duke.  She also was a longtime trustee of Lincoln Community Hospital, a Durham facility her family started in 1901 to serve the needs of black patients.  Semans was born in 1920 to Mary Lillian Duke and Anthony Drexel Biddle, Jr., a U.S. Army general who later served as ambassador to Poland and Spain.  She and her family divided their time between her parents’ country estate in Irvington-on-Hudson and their Fifth Avenue mansion in New York City, across from the Metropolitan Museum of Art.  At age 14, she moved from Manhattan to Durham to live with her grandmother. She enrolled at Duke University at age 15 and studied art history, graduating in 1939.  While in college, she met and married medical student Josiah Charles Trent, who later became the chief thoracic surgeon at Duke Hospital.  They had four daughters before Trent died of cancer at age 34.  In 1953, she married Dr. James Semans, a surgeon and associate professor of urology at Duke.  They had three children.  Mary Duke Biddle Trent Semans passed away on June 26th at the age of 91, and a funeral service was held on January 30th at 2pm at Duke Chapel in North Carolina.  Charlie Rose, a close personal friend of Mary’s, aired this 2008 interview with the beloved figure the day after her death.  A truly remarkable woman.

TO WATCH CHARLIE’S LOVING WORDS FOR HIS CLOSE FRIEND BE SURE TO FAST FORWARD TO THE 42:00 MARK. 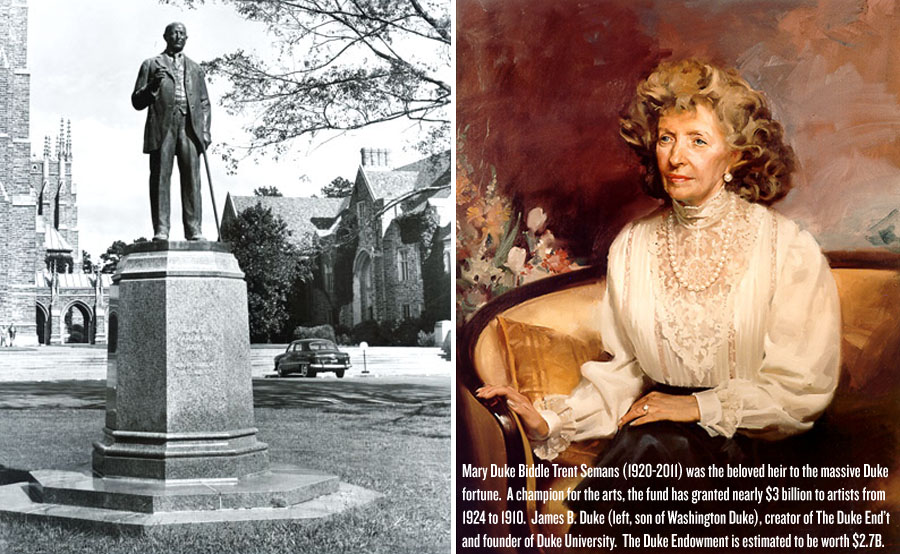