Stabbing Pitchfork: Brilliant, Scathing Review Of How Pitchfork Is Destroying The Soul Of Indie Rock

n+1 is a weighty arts and culture magazine, and just today they uploaded the full text of a fascinating review written by Richard Beck.  In his lengthy piece, Beck chronicles the impressive rise of the underground/indie music criticism and commentary website Pitchfork.  The behemoth online resource was founded by Ryan Schreiber, who launched Pitchfork in November 1995 from his parents’ house in a suburb of Minneapolis as soon as he graduated from high school.  In his critical review of Pitchfork, Beck explains the backstory of how this site became so huge and so pervasive, an it’s this exhaustive chronicling of Pitchfork’s history that adds more weight to Beck’s argument that Pitchfork is sucking the lifeblood out of independent music, and indie rock in particular.

“…[Pitchfork] has incorporated a perfect awareness of cultural capital into its basic architecture. A Pitchfork review may ignore history, aesthetics, or the basic technical aspects of tonal music, but it will almost never fail to include a detailed taxonomy of the current hype cycle and media environment. This is a small, petty way of thinking about a large art, and as indie bands have both absorbed and refined the culture’s obsession with who is over- and underhyped, their musical ambitions have been winnowed down to almost nothing at all.”

“…One of pop music criticism’s most important functions today is to perpetuate pop music’s favorite myth about itself—that it has no history, that it was born from nothing but drugs and ‘revolution’ sometime in the middle of the 20th century.  But the story of The Beatles doesn’t begin with John, Paul, George, and Ringo deplaning at JFK.  It begins with Jean-Philippe Rameau’s 1722 Treatise on Harmony, which began to theorize the tonal system that still furnishes the building blocks for almost all pop music.”

“…Most of all, though, we need new musical forms. We need a form that doesn’t think of itself as a collection of influences. We need musicians who know that music can take inspiration not only from other music but from the whole experience of life.  Pitchfork and indie rock are currently run by people who behave as though the endless effort to perfect the habits of cultural consumption is the whole experience of life. We should leave these things behind, and instead pursue and invent a musical culture more worth our time.”

Richard Beck’s review of Pitchfork is entitled “5.4/10”, a tongue-in-cheek blasting of Pitchfork’s 0-10 rating system which Beck also tears a new asshole.  This has to be one of the most fascinating and insightful critiques I’ve come across in as long as I can remember, and I strongly encourage you to read it in full at n+1 by CLICKING HERE.  I discovered n+1 via DUMMY magazine’s link to Beck’s review earlier this afternoon, but cannot believe I am just discovering it now.  n+1 is a world renowned print magazine of politics, literature, and culture founded in 2004 and published three times yearly.

n+1′s twelfth issue entitled “Conversion Experience” is now available in bookstores everywhere and by subscription.  The website is updated with new, usually web-only content several times each week.  To be able to read Richard Beck’s review of Pitchfork on the n+1 website is a privilege because the editors typically refrain from uploading material from the print magazine onto their website in order to encourage readers to subscribe to their printed version.  And for good reason — one glance through their publication and you will realize just how incredible it is.  To get your own subscription to n+1 be sure to visit the amazingness that is NPLUSONEmag.com.  You can also follow n+1 on Facebook, Twitter, and Tumblr. 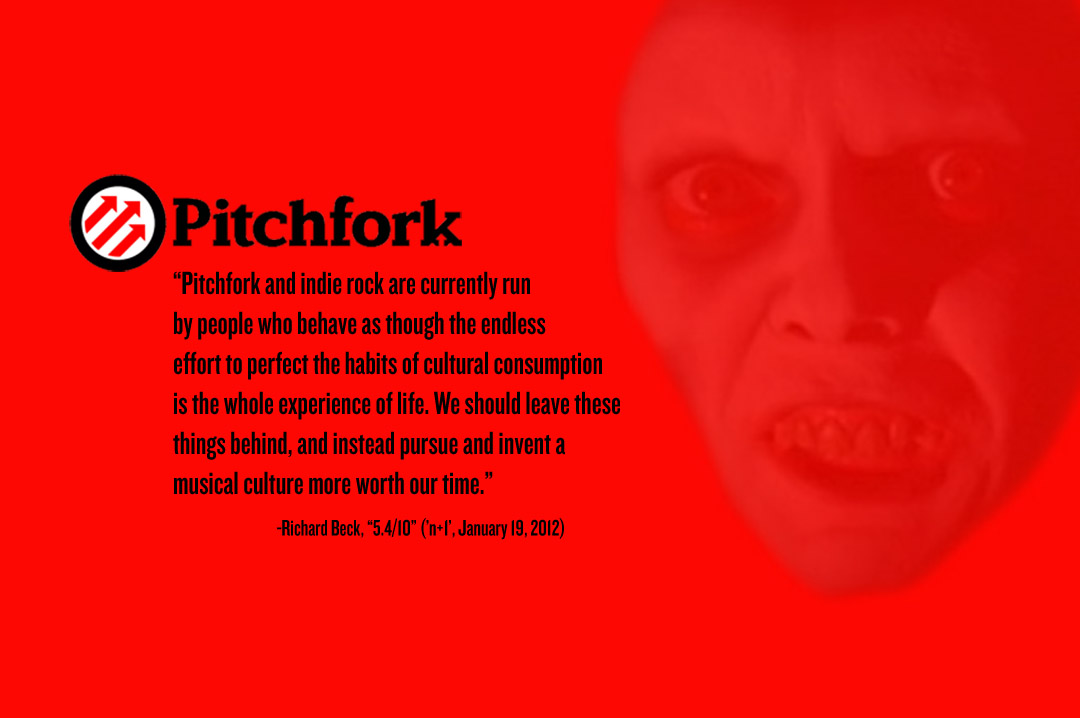 Previous post:
Forbes Reports China Is 175.6% Dependent On The U.S.: “They Need Us More Than We Need Them” Next Post:
Music’s Next Superstar (And My Future Husband) Jack Peñate Releases Video For “No One Lied”