In 1993, experts working deep inside the bowels of the Spanish film archive La Filmoteca de Catalunya made what can only be described as the single greatest film discovery of the past half century.  They had stumbled upon the long-lost original color reel of George Méliès’ iconic 1902 film Le Voyage dans la Lune (“A Trip to the Moon”) which was hand-painted frame-by-frame by Méliès himself.

Technically innovative at the time, Méliès’ masterpiece pioneered the use of trompe l’oeil objects, papier-mâché props and double-exposure to tell the first science fiction tale in cinema. The story sees astronomer Professeur Barbenfouillis, played by Méliès, fire himself and six colleagues to the moon, explore caverns beneath the surface and escape from the indigenous insectoid Selenites.  The painstaking restoration of the treasure began almost instantly, and was completed in 2011.  Twenty years after its discovery, the film was unveiled at the 2011 Cannes Film Festival and in February 2012 it will be released on DVD.  The kaleidoscopic color palette highlights the film’s hallucinatory elements, which have been given a fresh new dimension of surrealism with a brand new score composed by French ambient electronic duo AIR (Moon Safari, The Virgin Suicides).  In an interview with NOWNESS, AIR’s Jean-Benoît Dunckel says: “We wanted to give a very surrealistic touch to the movie.  Music has to make you leave the Earth.”  Vocal contributions to the music are made by Au Revoir Simone and Victoria Legrand of the amazingness that is Beach House.  Fellow AIR bandmate Nicolas Godin added: “When the people talk [in the film] we decided to use animal sounds.  We wanted to do the opposite of Walt Disney.  Walt [anthropomorphized the animals by making] them speak with human voices.  We have [inverted this] with farm noises and elephants.”

If AIR got together and had a love child with Pink Floyd and The Orb this is what it would sound like.  The Orb’s phenomenal 1995 gem Orbus Terrarum is one of my all-time most favorite albums, and when I finally get my hands on the DVD of this restored version of Le Voyage dans la Lune I’m going to watch it twice: the first with AIR’s beautiful new score, and the second while listening to Orbus Terrarum just to see what might happen.  The film was clearly a powerful source of inspiration for Victor Fleming’s 1939 masterpiece The Wizard Of Oz, and in their glowing review of the film and its restoration, The New York Times writes:

“An accomplished magician, Méliès moved from simple recordings of his stage shows to dazzling fantasy epics which were among the first narrative films ever made.  These ‘trick films’ combined fantastic yarns, intricate painted sets, and elaborate costumes with such simple but effective special effects as slow motion, dissolves, and superimpositions.  Like Méliès’s other long films of the period, Trip to the Moon is composed of a series of tableaux, each featuring chaotic action and multiple camera tricks photographed with a stubbornly static camera, which work together to tell a simple story.  It proved sensationally popular with audiences, though Edwin S. Porter‘s The Great Train Robbery rode a slightly more sophisticated narrative to greater success the following year.  As one of the earliest examples of cinematic fantasy, A Trip to the Moon paved the way for such filmic flights of fancy as The Wizard Of Oz and Star Wars, as it proved that the seduction of the audience through special effects has roots deeper than the blockbusters of the Seventies.“

With today’s digital capabilities, fragments of the film’s 13,375 frames were reassembled one-by-one.  The nitrate print had been severely damaged over time and was in such poor condition that attempting any restoration work seemed futile.  Following a film exchange with the Filmoteca de Catalunya, Lobster Films received the damaged color print and began the tedious task of peeling off and unrolling the nitrate prints to be able to digitize them.  It took two years to extract the images.  The data obtained was stored on a hard drive for eight years as the technology available at the time did not allow Lobster Films to move forward with the restoration.  In 2010, a project team involving Lobster Films, Groupama Gan Foundation for Cinema and the Technicolor Foundation for Cinema Heritage — the only two foundations in France dedicated to worldwide cinema —  launched the most complex and ambitious restoration project in the history of cinema, with a budget equivalent to a long feature high-end restoration (more than $500,000). 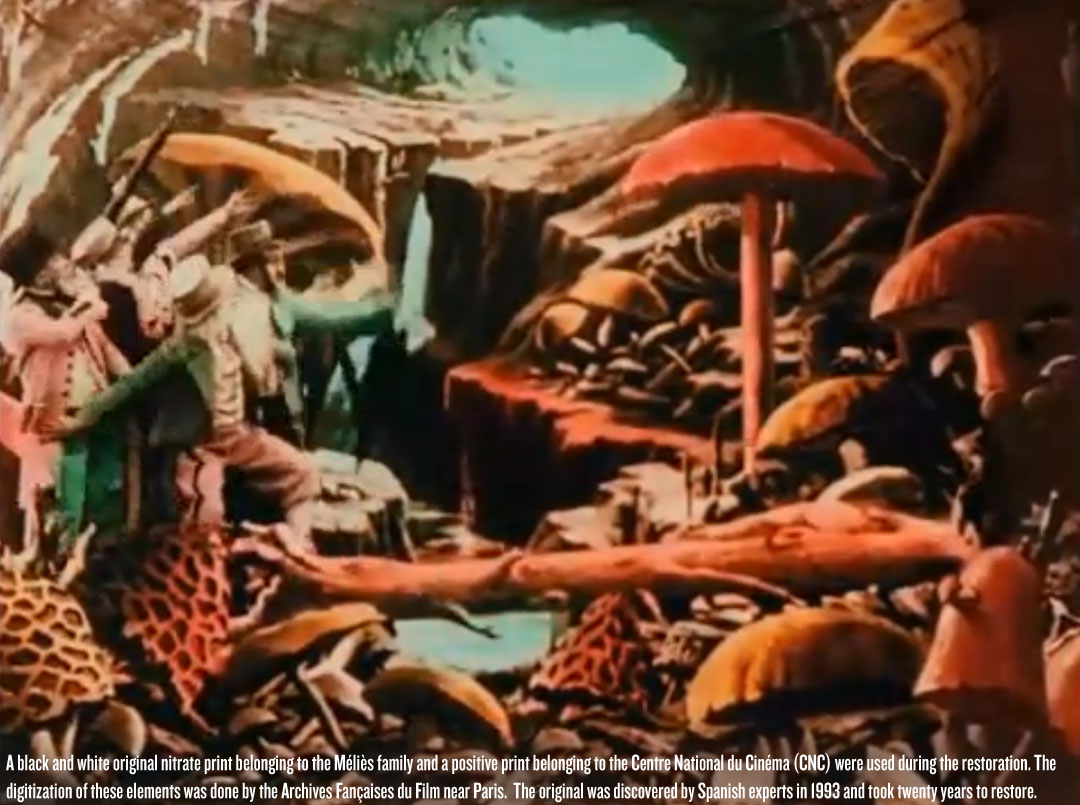 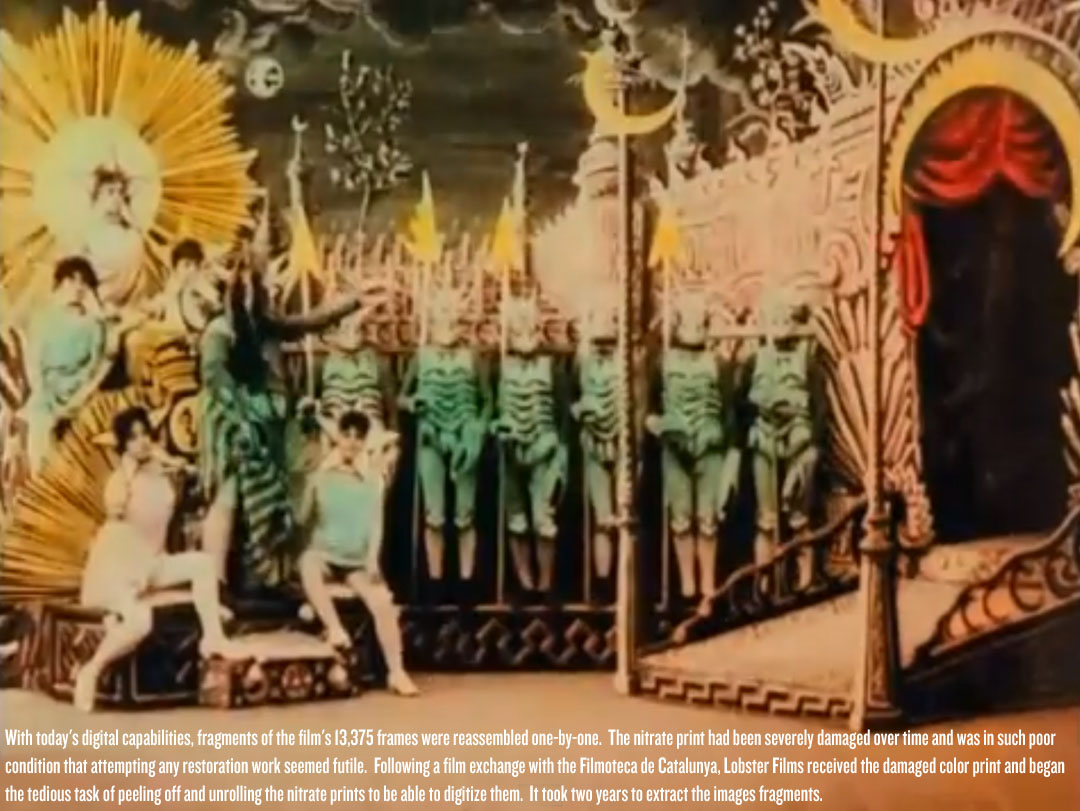 The digital restoration of A Trip to the Moon took place at Technicolor’s laboratories in Los Angeles, California and was supervised by Tom Burton. A black and white original nitrate print belonging to the Méliès family and a positive print belonging to the Centre National du Cinéma (CNC) were used during the restoration. The digitization of these elements was done by the Archives Françaises du Film (CNC-AFF) near Paris.  You can read more about the incredible story behind the film’s restoration by visiting Indiewire.  AIR’s soundtrack will be available for purchase on February 6, 2012 and you can get your own copy on that date by visiting AIR’s website AIRcheology.com.  You can purchase your own copy of The Orb’s extraordinary ambient house album Orbus Terrarum on iTunes.  For all things Pink Floyd be sure to visit PinkFloyd.com.

SEE ALSO: Watch “The Wizard Of Oz” With “The Dark Side Of The Moon” On Vimeo!!!
SEE ALSO: 17 Lost Minutes From “2001: A Space Odyssey” Discovered In Kansas Salt Mine