I love seeing examples where designers merge old traditions with new technologies.  Such is the case with New York-based studio SOFTlab, whose work falls somewhere between the realms of digital and analog.  The Creators Project recently commissioned the SOFTlab team to create a giant kaleidoscopic piece for their unforgettable art and technology festival in DUMBO, Brooklyn which was held back in October 2011.  The final result of SOFTlab’s design was a 2-part interactive sculpture entitled R&Dazzle, inspired by the camouflaged naval vessels of World War II.  In TCP’s profile video, SOFTlab founder Michael Szivos walks the viewer through the design process for R&Dazzle (a clever play of words between “Research and Development” and the warship painting technique known as “Razzle Dazzle”).  He also shows how his firm merges traditional construction techniques with high technology.  To watch The Creators Project video profile of SOFTlab CLICK HERE.  To learn more about what happened at the festival you can watch TCP’s video by CLICKING HERE.  When I first glanced at TCP’s feature of SOFTlab’s kaleidoscope I had confused it with lightmapping artist Dev Harlan‘s incredible light sculpture Parmenides I  which you will see in the video below (you can read the full FEELguide piece on Harlan by CLICKING HERE).  Parmenides I  made up part of Dev Harlan’s solo exhibition “The Astral Flight Hangar” at the Christopher Henry Gallery in New York.  For more great discoveries such as these be sure to visit TheCreatorsProject.com and follow them on Facebook.

NOTE: I TRIED TO EMBED THE KALEIDOSCOPE AND TCP VIDEOS BUT THEY ARE INCOMPATIBLE WITH WORDPRESS.  CLICK ON THE LINKS ABOVE TO CHECK THEM OUT.  UNFORTUNATELY, TCP HAS NOT UPLOADED THEM TO YOUTUBE OR VIMEO. 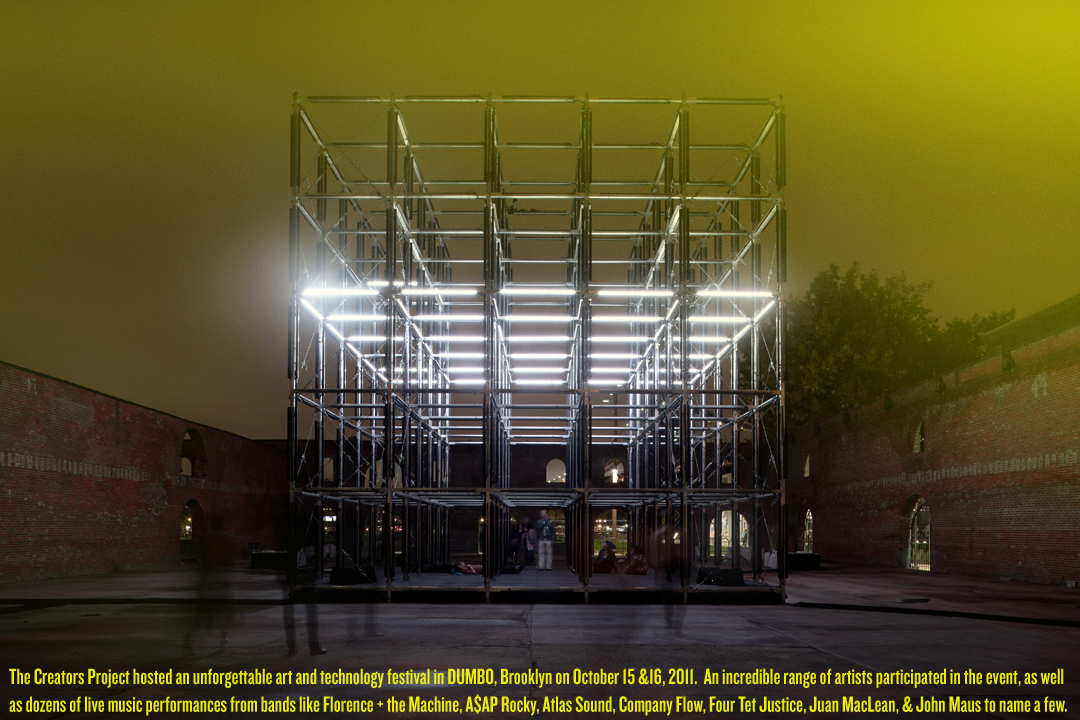