Jason Silva recently FB’d this terrific op-ed piece by Tom Wolfe of The New York Times regarding the current impotent state of NASA‘s space program.  In stark contrast, last week China announced its incredibly ambitious new plans for its own space program which include: putting laboratories in space, collecting samples from the moon, preparing to build space stations over the next five years; launching manned-vessels and freighters into space during the coming half-decade, and the country’s eventual long term goal of a manned lunar landing.  The news must have felt like a swift kick in the gut to NASA whose dedicated team of scientists are full of dreams, but have nowhere near the budget of their Chinese counterparts.  The following is an excerpt from the New York Times op-ed:

“NASA’s annual budget sank like a stone from $5 billion in the mid-1960s to $3 billion in the mid-1970s. It was at this point that NASA’s lack of a philosopher corps became a real problem. The fact was, NASA had only one philosopher, Wernher von Braun. Toward the end of his life, von Braun knew he was dying of cancer and became very contemplative. I happened to hear him speak at a dinner in his honor in San Francisco. He raised the question of what the space program was really all about.  It’s been a long time, but I remember him saying something like this: Here on Earth we live on a planet that is in orbit around the Sun.  The Sun itself is a star that is on fire and will someday burn up, leaving our solar system uninhabitable.  Therefore we must build a bridge to the stars, because as far as we know, we are the only sentient creatures in the entire universe.  When do we start building that bridge to the stars?  We begin as soon as we are able, and this is that time.  We must not fail in this obligation we have to keep alive the only meaningful life we know of.  Unfortunately, NASA couldn’t present as its spokesman and great philosopher a former high-ranking member of the Nazi Wehrmacht with a heavy German accent.  As a result, the space program has been killing time for 40 years with a series of orbital projects … Skylab, the Apollo-Soyuz joint mission, the International Space Station and the space shuttle.  These programs have required a courage and engineering brilliance comparable to the manned programs that preceded them.  But their purpose has been mainly to keep the lights on at the Kennedy Space Center and Houston’s Johnson Space Center — by removing manned flight from the heavens and bringing it very much down to earth. The shuttle program, for example, was actually supposed to appeal to the public by offering orbital tourist rides, only to end in the Challenger disaster, in which the first such passenger, Christa McAuliffe, a schoolteacher, perished.”

Ugh.  To read Tom Wolfe’s entire op-ed entitled “One Giant Leap To Nowhere” be sure to visit The New York Times.  You can learn more about China’s ambitious plans for space at CNN.  For all things NASA visit NASA.gov and follow NASA on Facebook as well as Jason Silva on Facebook. 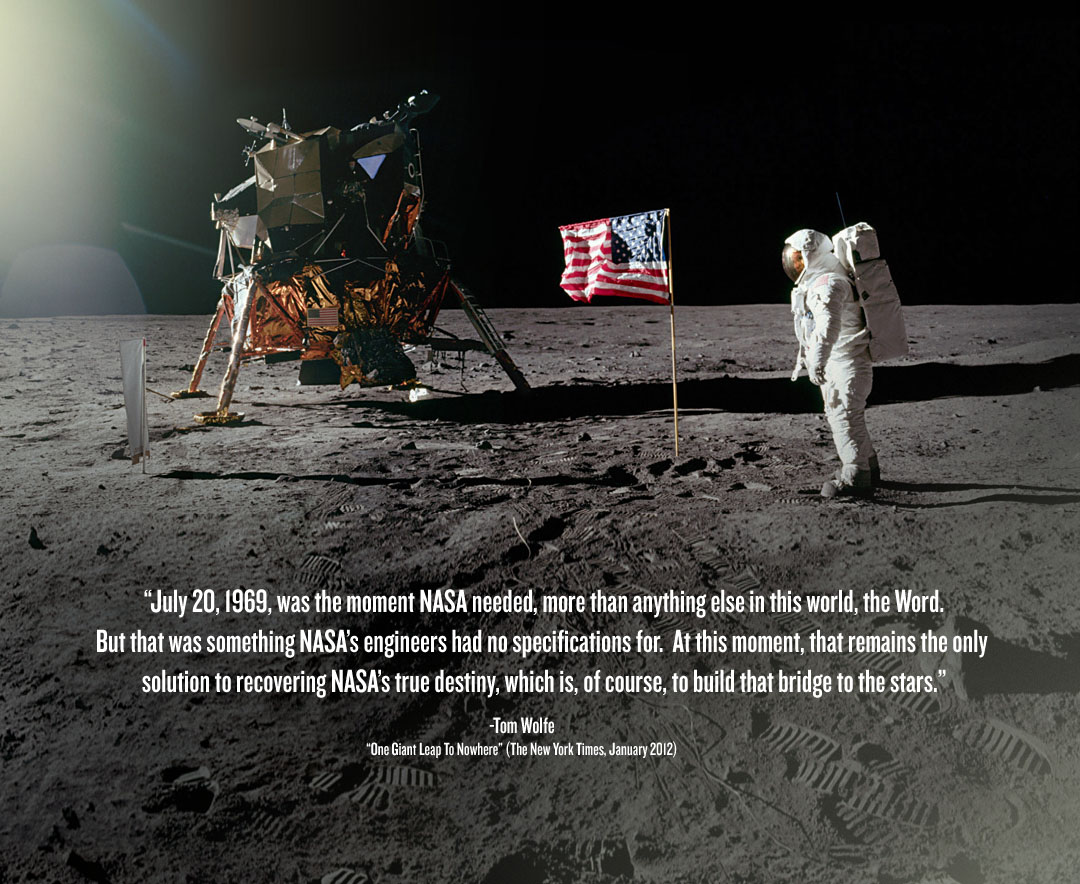