Christine Lagarde (born January 1, 1956) has risen to not only become one of the most fascinating people of 2011, but also one of the most powerful women in the world.  As head of the International Monetary Fund , Lagarde is one of the world’s most influential and important executive directors with regards to the mechanisms and health of the world’s financial systems and the global economy in general.

Trained and educated as a lawyer, Lagarde’s first brush with international recognition was when she was elected Chairman of the internationally renowned law firm Baker & McKenzie in Chicago at the age of 44.  In 2005 she entered the world of French politics, and by 2007 she was in charge of France’s economic policy.  On June 28, 2011 the governing board of the International Monetary Fund elected Lagarde as its next Managing Director and Chairman for a five-year term, starting on July 5, 2011.  Lagarde was born in Le Havre (a city in Haute-Normandie region in France) as Christine Madeleine Odette Lallouette, into a family of academics.  Her father, Robert Lallouette, was a Professor of English at the Faculty of Rouen, and her mother Nicole also worked as a teacher.  After graduation in 1974 at the Lycée François 1er in Le Havre, she received an AFS scholarship to the Holton Arms School in Bethesda, Maryland.  During her teenage years, Lagarde at one point worked as an intern at the United States Capitol, as William Cohen’s congressional assistant, and was even a member of the French national synchronised swimming team.  Upon graduating from law school at The University Of Paris X Nanterre, she obtained a Master’s Degree in political science from the Institut d’Etudes Politiques d’Aix-en-Provence.  Since 2010, she has presided over the Institute’s board of directors.  She is divorced and has two sons, Pierre-Henri Lagarde (born 1986) and Thomas Lagarde (born 1988), and since 2006 her partner has been entrepreneur Xavier Giocanti from Marseille.  Lagarde is an avid scuba diver, swimmer, gardener, vegetarian, and never drinks alcohol.  In September 2011, VOGUE profiled Lagarde in their feature entitled “Changing Of The Guard” written by columnist Diane Johnson.

60 Minutes recently profiled Lagarde and it provides an incredible look at not only one of the most powerful figures in the world, but also of a woman who will almost certainly become President of France, should she ever choose to run for the office after her term at the IMF is completed.  To watch the 60 Minutes feature click on the link below, and if you have not yet seen the Academy Award-winning documentary Inside Job, I’ve attached the preview for the film below as well. 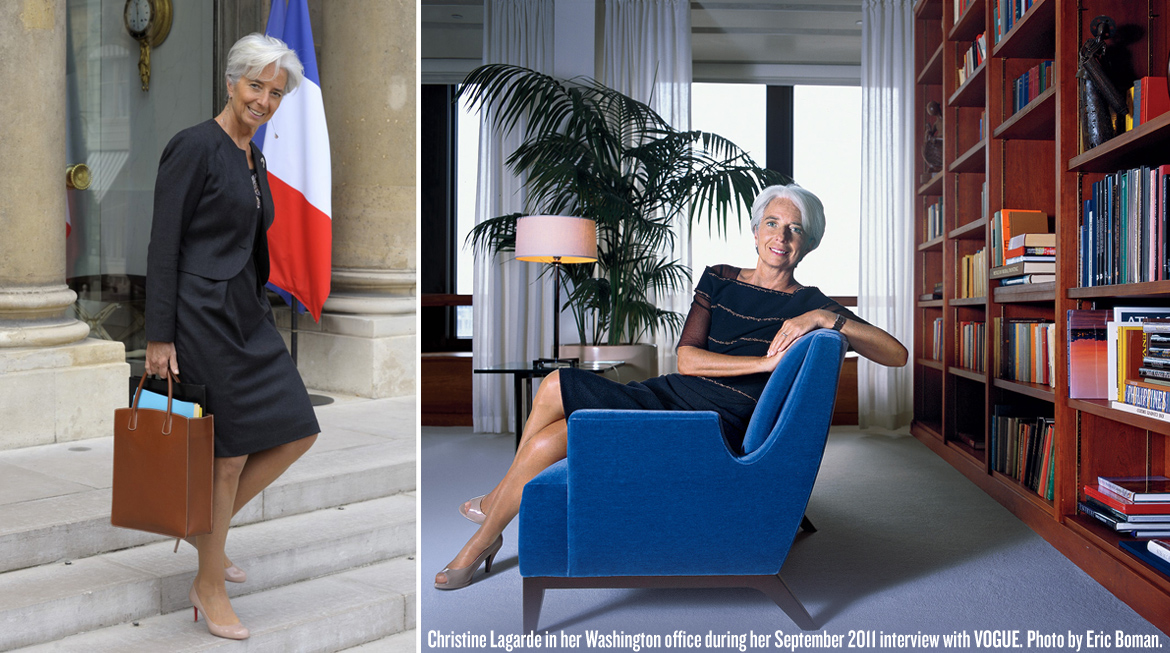