CNN Sits Down With Jason Moore, The Man Who Built Paris Hilton And The New Breed Of Fame

The engineering of public personalities and their climb up the ladder of fame is nothing new to us.  It dates back centuries, arguably thousands of years.  It’s only during the past 100 years since the beginnings of Hollywood that it has turned into such an enormous, all-encompassing presence in our everyday lives.  For more than ten years now, however, there has been one woman who has become the face of an entirely new breed of fame which has come to be known as “famous for being famous.”  For the past decade Paris Hilton has proven to us that fame and talent can indeed be mutually exclusive.  With a bit of cash and the right P.R. person, you can become a superstar.  For Hilton, this P.R. master was none other than Jason Moore.  Moore was the engineer behind Hilton’s rise from almost day one, and in 2009 he split with the celebutante right about the same time she began to disappear from the spotlight.  CNN recently sat down with Moore to talk about the new species of fame he engineered and its ramifications on our society and the personality caught in the middle:

… “That whole [famous for being famous] phrase exists because there was no definition for what was actually going on,” he says. “When all the artists were doing what we now call Impressionism, they couldn’t name it at the time so they just said, ‘squiggly painting,’ ‘crazy artists.’ That’s what ‘famous for being famous’ sounds like to me: a person not being able to properly define what a movement is and what that movement was doing.”  Indeed, Moore, a film school graduate and painter who frequently uses art references to describe his work with Hilton (including, “I felt the painting was complete” as the reason for their split) created what is arguably the most universal pop art exhibit in recent history, and it wasn’t by luck or coincidence or accident.

… “The key,” Moore says, “was planting seeds with regard to everything we did. Even if it didn’t feel big and it didn’t feel necessary, if there was a seed to be planted, we planted it. She understood that a ripple will, after a while, create a wave.”  Moore also studied the branding blueprints of rock stars like the Rolling Stones, Jimmy Buffett and the Grateful Dead. “Those guys aren’t releasing new material, but they’re making hand over fist every year from what? Touring. Selling merch. Building more fan base. Exploiting more territories. Planting more seeds.”  Soon enough, he and Hilton were traveling all the time.

… Moore and Hilton had the business of celebrity down to such a science that many other brands like Perez Hilton, TMZ, Kitson, GUESS and, of course, the Kardashians flourished because of their association with them.  Kim Kardashian is the most direct descendant, and the biggest beneficiary, of Hilton’s reign. When the two were close friends, Kardashian got to study the Paris playbook firsthand, learning the formula and then going on to replicate it with enormous success.  Even someone with a discernible craft like Justin Bieber shows signs of being influenced by Hilton and Moore’s celebrity road map.

I really have no clue what is going to happen to Paris Hilton next.  This kind of vacuous vanity can only go on so long before you’re holed up inside your castle, wearing Greta Garbo-like glasses, and refusing to be seen in public ever again.  Certainly the cracks are beginning to show in her public image with the recent debut of her latest series that fell about as flat as a pancake, and the rise of her biggest competitor, Kim Kardashian (dear God, please don’t let her last as long as Hilton did).  One indication that your ship has sailed is when the media that you have courted for so long begins to turn on you.  I think the best example of this was Hilton’s appearance on The View when her latest (and now cancelled) series was premiering.  Barbara Walters dismantled Hilton’s ego so effortlessly I wish someone had done it ten years sooner.   You can check it out below, and to read the entire profile of Jason Moore be sure to visit CNN.

SEE ALSO: Barbara Walters Destroys Narcissist Paris Hilton On Air, Screamfest With Producers Ensues Backstage
SEE ALSO: The Evolutionary Psychology Of Celebrity Obsession And The Top 8 Reasons Star Culture Exists
SEE ALSO: “The Frenzy Of Renown” Is A History Of Fame And Its Impact On Culture And Society Over Millenia 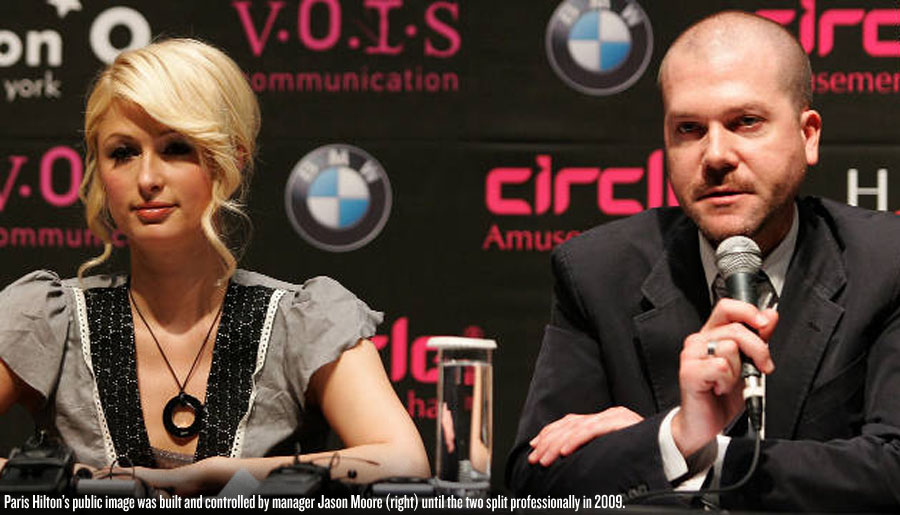 Previous post:
Philosopher A.C. Grayling Explains The Meaning Of Life To NYTimes In Under 5 Minutes (And Does A Great Job) Next Post:
Listen To Daughter’s Gorgeous New Track “Medicine”