As you read these words, approximately 18,000,000 tons of debris from the devastating tsunami that hit Japan earlier this year are drifting across the Pacific Ocean heading towards the west coast of North America.  Scientists estimate the debris field to be roughly 3,200km long and 1,600km wide, and is located between Japan and Midway Atoll.  A Russian ship recently spotted the field which contained such items as refrigerators, TVs, and other appliances, and was found exactly in the spot where experts predicted it would be.  A fishing boat from Japan’s Fukushima Prefecture was also found in the same location, adding further proof that the debris originated in Japan.  Scientists at the University Of Hawaii were the ones behind the accurate extrapolation of the debris field’s path and they recently told the Associated Press they believe the ocean currents will carry the tsunami debris to Hawaiian shores by 2013 before reaching the West Coast around 2014.  A great deal of the mess has likely sunk to the bottom of the ocean, and it is unknown at this time how much will remain floating by 2014.  The team is now calling on sailors and boaters to report as much data as possible and they add, “We are trying to get across our message that it is coming and it’s about time to start planning some action.”  The Japanese tsunami was triggered by a colossal 9.0-magnitude earthquake that struck on March 11, 2011.  21,000 people were killed or injured, and damage suffered by the Fukushima nuclear plant was catastrophic.  The damage estimate has been pegged by the Japanese government at around $300 billion. 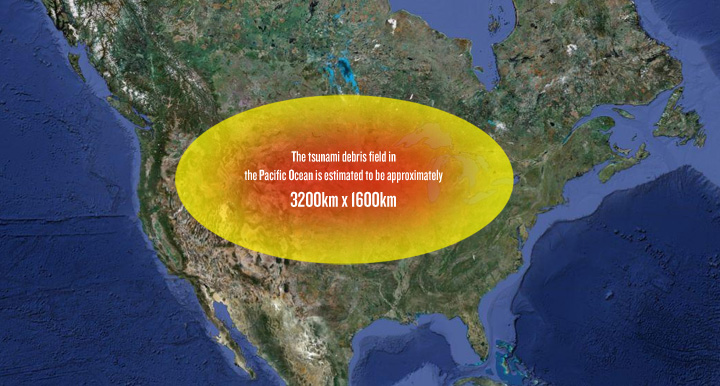 Previous post:
“We Need To Talk About Kevin” Wins Best Picture At BFI London And Gets Gorgeous New Poster Next Post:
Watch This Stunning Reel Showcasing The Brilliant Motion Graphic Work Of Umeric