Note To European Leaders: When Experts Beginning Warning Of “Intense Depression” It Might Be Time To Get Your Shit Together

Because Europe’s economy is larger than that of the United States, economists and leaders around the world are looking out on the horizon and see something coming towards us that is worse than anyone could have ever predicted.  The euro is teetering on the edge of collapse because of peripheral Euro nations including Greece teetering on the edge of default.  If Germany (the largest economy in Europe and the only one with a significant surplus and strong credit rating) doesn’t step in and shovel up this crap then the euro will likely implode.  Most economists around the world believe there is a 100% chance of a Greek default, and Italy (Europe’s third largest economy) is right behind them along with Portugal, Spain, and Ireland, in certain need of some major help as well.  The problem is there is barely enough money in all of Europe to save the euro, and worse than that: there is no single governing body to regulate the problems and boss around the European Central Bank.

Billionaire investor, George Soros — one of the world’s most trusted financial gurus — recently wrote in an article for The New York Review of Books and Reuters  that Europe was on a direct crash course for a major depression if they don’t act immediately.  “It appears the authorities have reached the end of the road with their policy of kicking the can down the road,” he says.  His recommendations to European leaders are the following:

1)  Establish a central governing authority for the euro (an extremely expensive proposition, this most important of all his must-do bullets, is likely the most impossible to achieve in time due to its political toxicity in the richest Euro nations — especially Germany).
2)  Prepare for 100% default by Greece, Portugal, and Ireland.
3)  Bank deposits must be protected and locked in order to prevent bank runs in the weaker nations.
4)  Some banks in the defaulting countries must be kept alive in order for their economies to not die entirely.
5)  The European banking system must be recapitalized and put under European supervision as opposed to national supervision in separate countries.
6)  Government bonds of other deficit countries would have to be protected.

Soros admits this is a phenomenally expensive list of chores to pull off in time, but he adds, “There is no alternative but to give birth to the missing ingredient: a European treasury with the power to tax and therefore to borrow.  That is the only way to forestall a possible financial meltdown and another Great Depression.”    And with regards to German opposition to a new European-wide central governing agency, he says, “The German public still thinks that it has a choice about whether to support the euro or to abandon it. That is a mistake.  The euro exists and the assets and liabilities of the financial system are so intermingled on the basis of a common currency that a breakdown of the euro would cause a meltdown beyond the capacity of the authorities to contain.  The longer it takes for the German public to realise this, the heavier the price they and the rest of the world will have to pay.”

Financial experts around the world are sounding the red alert, including The Daily Beast, whose money experts warned yesterday of the reality of “a darkening, intensifying depression.”  And at this past weekend’s International Monetary Fund get-together in Washington, the world’s top financial leaders essentially staged an intervention with Europe’s policy makers and told them they must draft and implement these new policies immediately or else the entire world would face a major Great Depression.  Inside sources say the European leaders were extremely shaken and the message finally sunk in.  The only question now is this: will they be able to pull off the impossible in time?

George Soros was also asked if this crisis has any connection to the September 2008 crash which was our most recent brush with another Great Depression, and he said it’s not just connected — it’s still the exact same unfolding crash.  If you have not yet seen the Academy Award-winning documentary Inside Job — the incredible film which walks the viewer through the causes of the ’08 crash — you absolutely must.  Be sure to check out one of the opening scenes in the clip below.

SEE ALSO:  Not Yet Worried About The European Economic Crisis? You Will Be After You Watch This 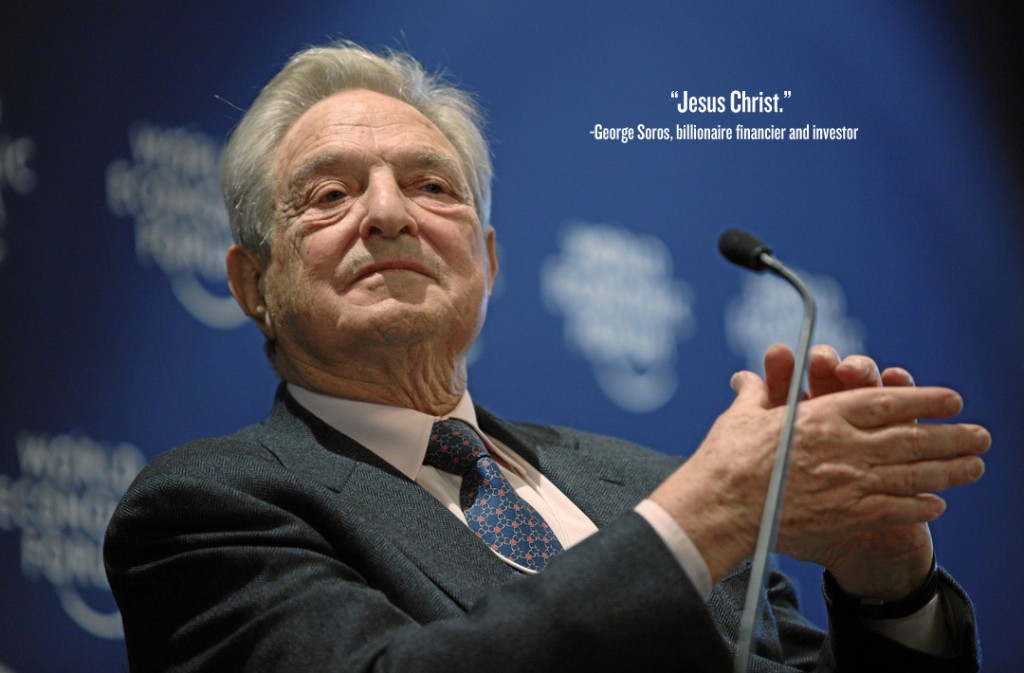 Previous post:
The “Casa Cher” In The Forests Of Argentina Has Me Dreaming Of Glass, Concrete, And A Sugar Daddy Next Post:
Teebs Releases Beautiful New Video For “Moments”