We’re only 2/3 of the way through 2011 but already it gets the top prize for the number of conversations I’ve had with friends about the power and influence of a full Moon on our physiology and our minds.  Whether it’s someone down in the dumps, or someone looking for a hump, there is clearly something major going on whenever the sun slaps a direct full-blast of light on our beloved Moon in the wee hours of the night.  I did some research and here are some of the most fascinating tidbits I discovered:

☛ There is an 8% increase reported in average meal sizes on the day of the full moon, and a 25% hike in drinking rates. Researchers in Italy have also found that births tend to be clustered around the full moon.

☛ It has also been widely proposed that if the gravitational force of the moon is sufficient to cause the oceans to rise, it may also affect the glands and organs. Some people are affected more than others, it’s suggested, because they are borderline cases that are tipped over into ill health every month by the power of the moon (the human body is 60-70% water).

☛ Insanity is given another name “lunacy”, which comes from the Latin word “luna” which means moon.

☛ Hormonal reactions to increased positive ions in the air cause by a full moon result in hyperactivity, depression, violent behavior, road rage, higher occurrences of migraines and asthma.  Even bees are known to sting without provocation on higher positive ion ratios.

☛ Gout attacks peak during the full moon because of the changing geomagnetic fields.  The moon exerts a pull on the water within the body, resulting in a cascade of effects, including the shifting of internal body rhythms.  The pineal gland is also directly affected by the moon’s light and the slightly warmer temperature caused by the full moon (the pineal gland, also known as “third eye”, is a small endocrine gland in the vertebrate brain. It produces the serotonin derivative melatonin, a hormone that affects the modulation of wake/sleep patterns and seasonal functions).

☛ The full moon has a small gravitational/unbalancing effect on pathogens which results in the body being more toxic.

☛ If you breathe large amounts of positive ions without an equal amount of negative ions, you will actually become lethargic and in some cases sick (high positive ion concentrations in the air are associated with the full moon).  Air containing more negative ions and fewer positive ions as shown to be beneficial and without side effects. That is why negative ion generators are sold around the world.  Negative ions in are found in their highest natural levels in coastal areas, forests, and near waterfalls and rapids.

☛ In the 25% of the general population during higher positive ion ratios, short term increase in productivity occurs (attributed to hyperactive adrenaline production).  After extended esposure or duration to positive ions, this increase in productivity quickly turns into poor performance (attributed to a weakened or exhausted adrenaline gland).  Once the adrenaline gland has become exhausted, the body then must deal with the excess serotonin.  Without adrenaline to balance the serotonin side effects, the serotonin becomes a major antagonist to both man and animal and leads to the following side effects: anxiety, nervousness, tremors, sweating, dizziness, lightheadedness, dry mouth, upset or irritated stomach, appetite loss, nausea, vomiting, diarrhea, stomach gas, rash, itching, and changes in sex drive.  This adrenal “burn out” happens days afterwards and connects back to the very first point at the top of the list.

A full moon is a lunar phase that occurs when the Moon is on the opposite side of the Earth from the Sun. More precisely, a full moon occurs when the geocentric apparent (ecliptic) longitudes of the Sun and Moon differ by 180 degrees; the Moon is then in opposition with the Sun. As seen from Earth, the hemisphere of the Moon that is facing the earth (the near side) is almost fully illuminated by the Sun and appears round. Only during a full moon is the opposite hemisphere of the Moon completely dark.   The time interval between similar lunar phases (the synodic month) averages about 29.53 days. Therefore, in those lunar calendars in which each month begins on the new moon, the full moon falls on either the 14th or 15th of the lunar month. Because lunar months have a whole number of days, lunar months may be either 29 or 30 days long. 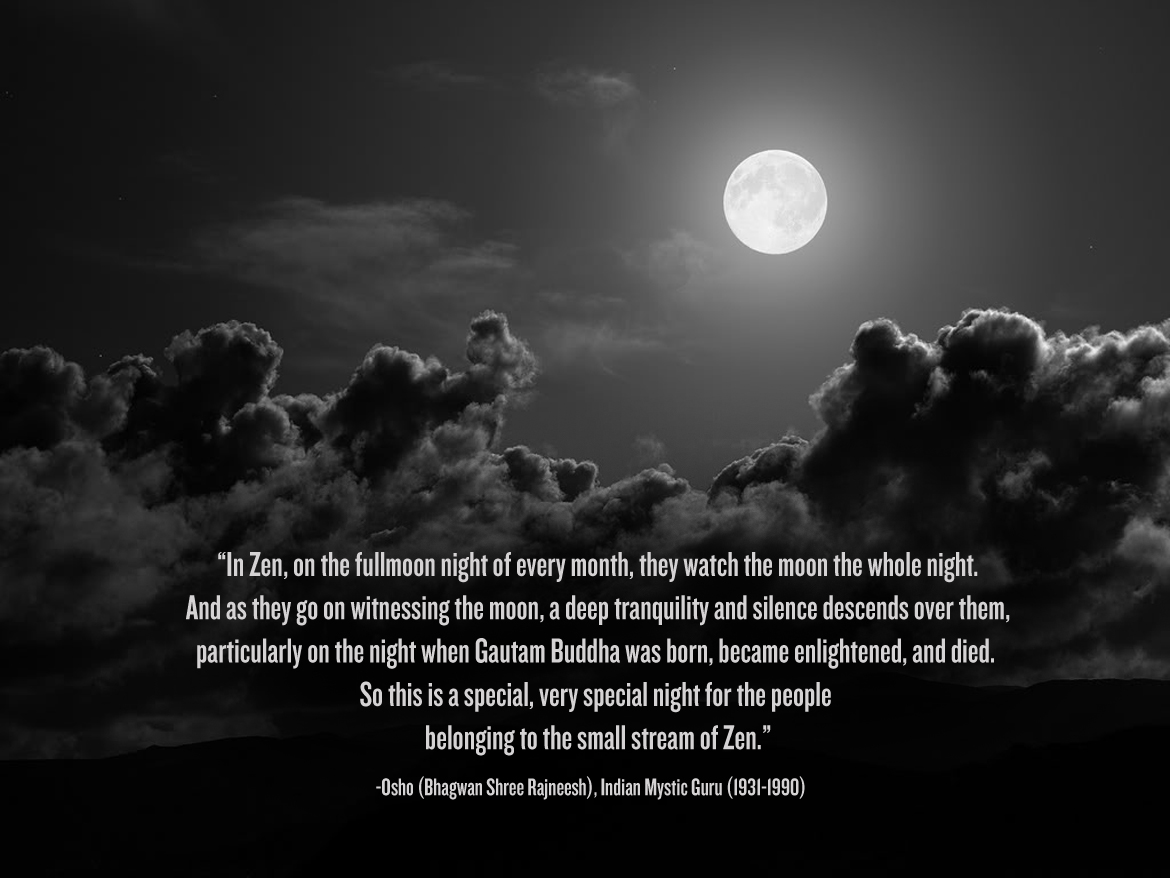 Previous post:
Active Child’s “You Are All I See” Is So Damn Good I’m Half Speechless Next Post:
Wall Street Journal: Abercrombie & Fitch Offers To Pay “The Situation” To Stop Wearing Their Clothes