This weekend marked the long-awaited arrival of The Smurfs on the big screen, leaving many of us scratching our heads as to why these heroic little blue darlings had such a painfully long journey to Hollwood. The Daily Beast just published a great article on the complexities involved in bringing these beloved little creatures to the movies.  The following is a summarized version of the Smurfs‘ long road to the silver screen:

THE BEGINNING (1958): In 1958, Belgian illustrator Peyo created the characters which were originally conceived as dwarves, and were designed as a sidekick for a comic strip. Peyo’s wife suggested using blue as a skin color so the creatures wouldn’t get muddled in with the brown dirt or the green trees.  The Smurfs fast became a pop culture hit in France and Belguim, spawning their own series of books. The Smurfs live in their adorable little Smurf Village in homes made of mushrooms, and each character reflects a major human attribute (i.e. Papa Smurf represents wisdom, Vanity carries a mirror around, Brainy represents intellectualism, etc.).  Gargamel represents the Devil, and his sidekick cat, Azrael, always hang out nearby in the hopes of kidnapping them to make the most delicious meal imaginable. (NOTE: Smurfette, the sole female in the clan, was introduced in 1964 and was inspired by both Marilyn Monroe and Peyo’s daughter, Veronique Culliford. Peyo took photos of Culliford when she was young in order to develop the look of Smurfette).

TELEVISION (1981-1989): In 1980, NBC President Brandon Tartikoff took a closer look at the European phenomenon and asked Jordan Kerner to develop the story into either a Saturday morning cartoon or a primetime show.  Kerner decided the morning cartoon was the best fit, and The Smurfs’ debut on television was a massive hit.  Animated by Hanna-Barbera, The Smurfs became one of the most successful Saturday morning cartoons ever, spanning nine years and 272 episodes, and turning into a merchandising empire.

MOVIE DEVELOPMENT (1997-2002): By 1997 the Smurfs had been off the air for only seven years (traditionally a film version of a cartoon of this significance is made after the show has been off the air for at least 15 years). Kerner, however, was so keen on a movie version he sent a letter to the Cullifords every year from 1997 to 2002 until the estate decided yes.  Paramount wanted to develop the project under its Nickelodeon banner, which had just released the Rugrats movie. The Smurfs would be animated in the same way and hit theaters before their 50th anniversary in 2008.

MERCHANDISING RIGHTS NEGOTIATIONS (2002-2005): The biggest sticking point that held up the movie was the issue of merchandising rights. “It took three years to negotiate that,” Kerner tells The Daily Beast. “The agreement is 100 pages.” Culliford herself elaborated, “We know when you discuss with giant Hollywood people, it’s very difficult to keep all your rights. We had a nice negotiation. Everybody was happy in 2005.”

FROZEN DEAL (2005-2007): By 2005 Paramount execs had lost interest mainly because the people who were originally pushing it were no longer there: Paramount chief, Sherry Lansing, had stepped down in 2004; and when Paramount’s mother ship Viacom acquired DreamWorks Animation in 2005, all old projects were shelved.

NEW INTEREST (2007): When Alvin And The Chipmunks arrived on the bigscreen everyone in Hollywood was blown away at how well it did ($45 million opening).  Kerner said every studio chair called him wanting to do the Smurfs.  He added, “I called my agents and said Warner has called, Fox has called, MGM has called. Paramount never called. Go figure. They owned it.” The big shift came in 2007 when Sony Pictures chief Michael Lynton (who was raised in the Netherlands and had a childhood soft spot for the characters) desperately wanted to make the film.  Sony soon bought the rights from Paramount.

SERIOUS C.G.I. CONCERNS (2010): It took a great deal of work to come up with the final look of the Smurfs.  “There had to be no question they were Smurfs,” the film’s director Raja Gosnell tells TDB. “They couldn’t look like an elf or a troll. Finding the different variations within the Smurf DNA took some time.” This delayed the project another year.  The official Sony greenlight didn’t come until a week before shooting — but with good reason.  An uncertain project such as The Smurfs becomes even more uncertain when any given Smurf shot costs from $10,000 to $80,000.  The director had to convince the execs he could make the film with a maximum of 800 of these shots (resulting in a final CGI cost of $8 million to $64 million). After 3 days of painful meetings, Gosnell convinced them it was possible and they began shooting in March 2010.

The article goes into further detail of why the Smurfs are so meaningful to so many people (their blue skin color, believe it or not, apparently has a lot to do with it).  Sony is watching the success of The Smurfs very closely over these next two weeks, because they have a trilogy planned if it does well.  If it succeeds, the sequel will kickstart in September of this year for a 2013 release. The Smurfs is in theaters now. To read the full article be sure to visit The Daily Beast.

UPDATE: ACCORDING TO EARLY NUMBERS FROM The Hollywood Reporter, THE FILM IS OVERPERFORMING AND PULLING IN SOME SERIOUS CASH. 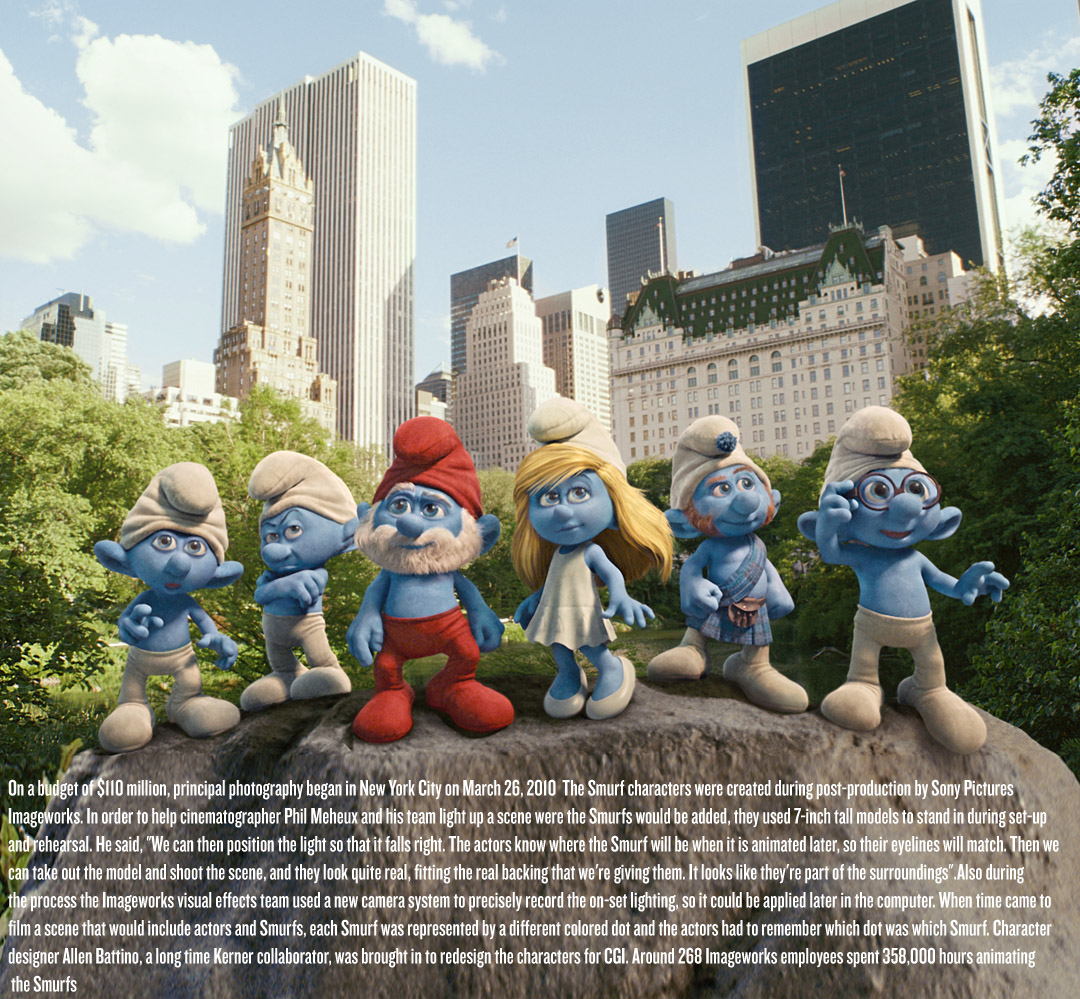 Source: The Daily Beast and Wikipedia