Interview Magazine Talks With Amanda Lepore, The Most Glamorous Transsexual In The Universe

One of my proudest celebrity ambushes occurred a few years back at a burlesque show here in Montreal featuring the one-and-only Amanda Lepore (born December 5, 1967 in Cedar Grove, New Jersey). There were several acts, but the second Amanda finished her set, my friend Peter and I whisked backstage, slipped past the security guard, and for a brief moment we got to hang out with Amanda Lepore — the most celebrated transsexual in the world — in her dressing room.  Enough time to say hi, shake hands, and see her basking in the soft focus glow of her make-up vanity mirror and lights.  As fast as we slipped back there we were slipped out again by her hulking bodyguard, but I won’t soon forget that moment.  It seems everything is in soft focus around Amanda, and when the focus gets too crisp, well — what’s wrong with another nip and tuck, right?  In this Interview magazine sit-down with Amanda, I was surprised to learn that her current status as the world’s most famous and glamorous man-turned-100% woman wasn’t originally her dream at all.  By the end of 1984 Amanda had a full sex-reassignment operation before her 17th birthday (a legal loophole got her in before she was 18), and the only thing she had ever wanted was to “be a pretty girl working in a mall.” Even she admits if she had a crystal ball way back then and could see everything that has happened to her life she would never have believed it.  Here is a few excerpts from Madison Moore’s interview with Lepore:

MOORE: What does glamour mean to you?

LEPORE: For me, it was always an escape. When I was a kid, my mother was hospitalized, she was schizophrenic. When she was sick, she wouldn’t do her hair or her makeup, and she just looked terrible. But when she got on medication and she was happy, she would go to the beauty parlor and wear makeup. So I really associate glamour with being happy. If you put on high heels and lipstick or get a new outfit, you feel great. It’s a celebration of loving yourself, and the whole ritual of it is so great.

LEPORE: It kept me out of trouble. When I worked for Michael Alig, everybody was overdoing partying. It would take me so long to get ready, because I was never one of those girls that were naturally the cover of Vogue. I had to really work hard to look nice. I would take hours and hours to get ready. If you have high heels on, if you’re dressed nice, you really can’t be drunk or sloppy because it’s dangerous. It’s part of being a lady, so it really kept me out of trouble.

MOORE: Do you think of “Amanda Lepore” as a commentary on gender?

LEPORE: I really, truly, feel like a woman. After having the sex change, it was about getting married and fitting in and blending into society, so to speak. When I had jobs, people would say, “Don’t talk about that.” It really made people uncomfortable.

MOORE: So before becoming a nightlife icon, you were just a suburban housewife trying to fit in?

LEPORE: Yeah, but I escaped all that. The club scene was really like a… they really weren’t sure if I was a girl or a transsexual. When they found out, it was celebrated instead of “Ssshh! Don’t tell anyone!” That felt really liberating.

MOORE: How did you initially get involved with the club kid scene? You grew up in New Jersey. Did you sneak to New York at night?

LEPORE: At that time, I just really liked being a girl and being with a family. And, you know, I had this vagina and I was so happy, and I could just spend hours looking at it. I didn’t really care about going out for years. Then my roommate took me to a Disco 2000 party and they were like, “Oh, you’re fabulous. I want you to work at this party.”

MOORE: Do you ever feel lucky?

LEPORE: When I was in the hospital getting my sex change, I was just wishing I could be a pretty girl working in a mall. If I could have a crystal ball and see what I look like now—you know, modeling, David LaChapelle, hanging out with Daphne Guinness, singing with Lil’ Kim, and traveling all over the world, I’d be like, “Wow, I can’t believe this.”

To read the full interview, be sure to visit Interview magazine, and to learn more about Amanda Lepore’s life story head over to Wikipedia. Her latest album I… Amanda Lepore is having its release party at the Highline Ballroom in New York City this Saturday, June 25 coinciding with the city’s Gay Pride festivities.  You can follow Amanda Lepore on MySpace. 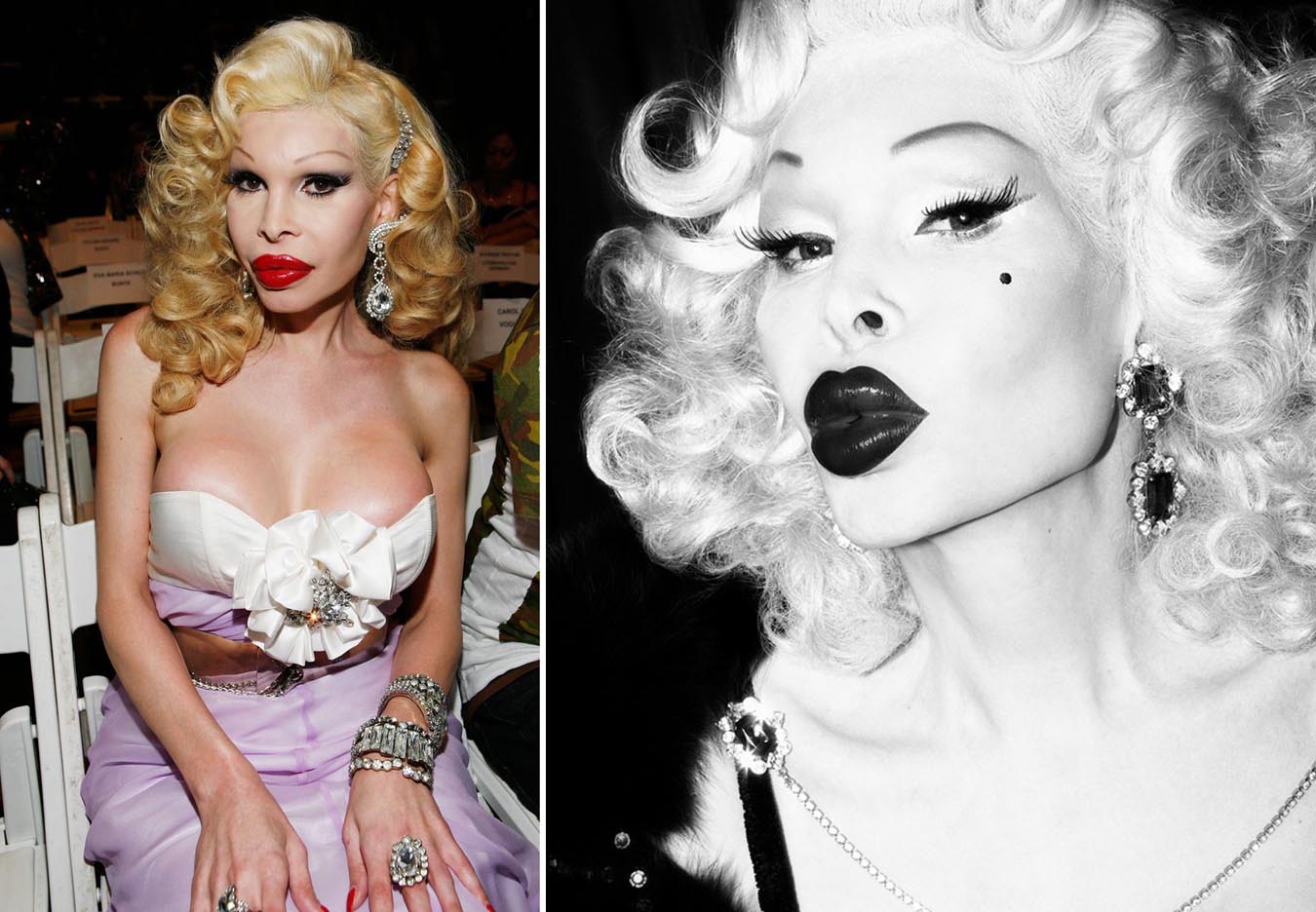 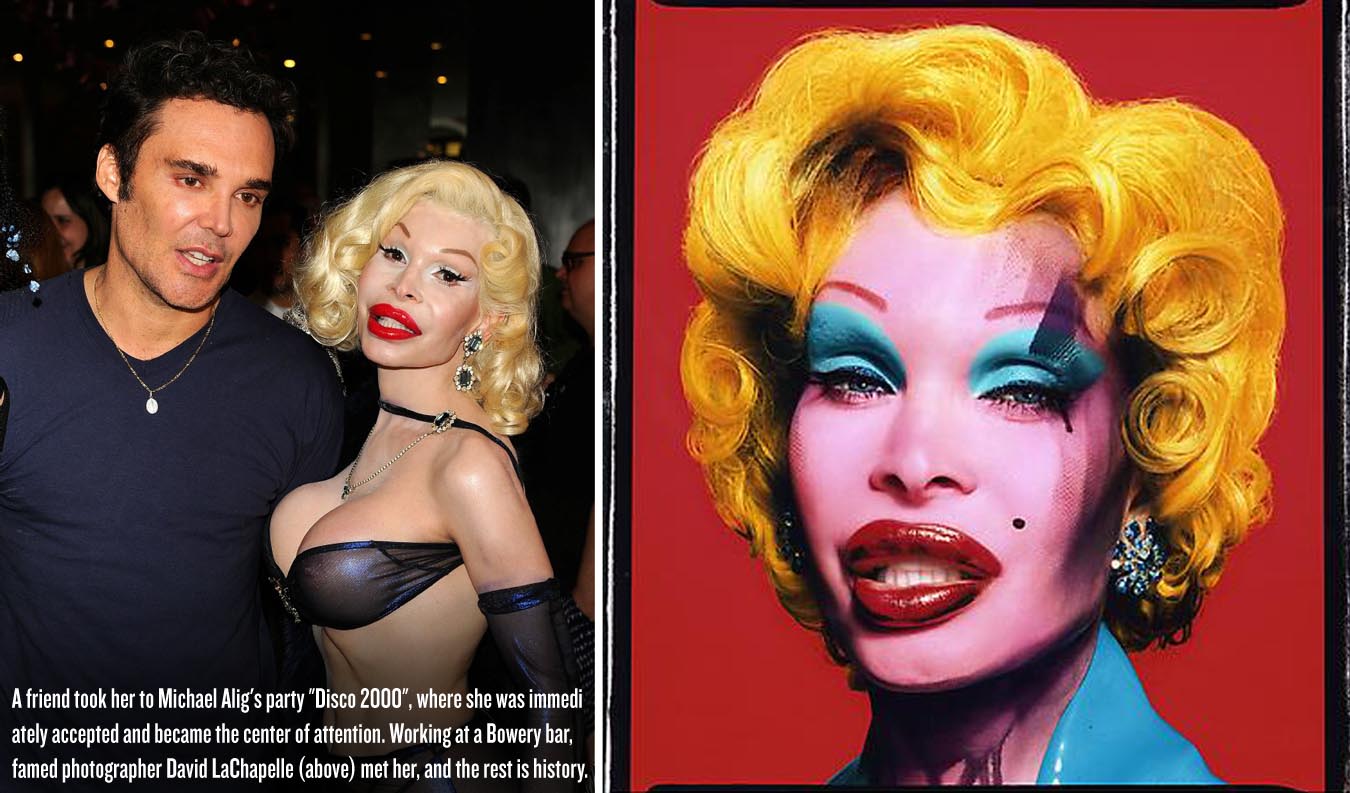