I can remember during week number one of my university career way back in 1995 getting my very first taste of the Internet.  Sure, it was still in its infancy, but it was nonetheless mindblowing to me. Fast forward 16 years and not only has the World Wide Web grown to an unfathomable scale, it has completely transformed the way we live our lives. As you read these words, a mother is baking a birthday cake for her son’s first birthday in her tiny kitchen in Brazil thanks to her favorite online cooking site.  In Manhattan, one of the world’s largest banks just revamped their computer systems so thousands of its clients can understand their financial lives more clearly from the comfort of their own homes.  In a medical lab in Paris, a researcher just uploaded a snippet of genetic code onto the Web as part of a worldwide research project on the verge of finding a cure for cancer.  In India, a teacher is expanding her students’ minds at a rate that would have been impossible just a few short years ago — all thanks to the Internet.  And in Melbourne, a beaming proud grandmother is getting her first look at her brand new grandson born just minutes ago in far away Oregon care of Skype online (meanwhile in the basement, her unemployed 40-year-old son is performing an unmentionable activity in his bedroom with the help of streaming technology).

The Internet has exploded so fast that we’re still trying to figure out what it is and what it’s capable of becoming. An unfortunate result of these unknowns has been the growing threat of government and private regulation.  The most beautiful and fascinating part of the Internet is its openness, and its ability to evolve each and every second unhindered.  It is one of the most staggering achievements in human history and it is absolutely essential that it remain transparent, open, and decentralized so as to not jeopardize its development.  There are many people and organizations around the world dedicated to this preservation work, but one of the most elegant and exciting campaigns I have ever seen is officially launched as of today.

It’s called Mark Up, and it’s an interactive online project that allows visitors to sign their name in support of the open Web. Mark Up is a joint collaboration between Mozilla Firefox, The Barbarian Group in New York, and Evan Roth.  Evan is the creator of the ingenious Graffiti Markup Language (GML), co-founder of the Graffiti Research Lab,  and on top of that he’s also a renowned artist (check out his work at Evan-Roth.com). The Barbarian Group is one of America’s leading digital services and creative agencies, with clients that include: CNN, Virgin, Lexus, Unicef, Volkswagen, and many more (they also happen to have a stellar portfolio, as well as one of the most impressive and entertaining websites I’ve had the pleasure of coming across in a very long time at BarbarianGroup.com). Here’s some info from this dream team in their own words:

Much like Mozilla, we believe that the Web is the greatest tool available to us. It connects and empowers us, and allows for the open sharing of ideas. Mozilla Mark Up is about celebrating this resource and making a statement that an open Web is an essential part of our future. Mark Up’s message is that we are all authors of the Web, and by leaving our Mark we are supporting a Web that is open and in the hands of the people. At its most basic level, Mark Up is a collection of user-submitted marks, all connected in a continuous line in 3D space that is symbolic of our message. Using Evan’s Graffiti Markup Language (GML) as the data storage for our Marks, Adam Miller, the lead developer on the team, created the drawing input system that we would use to capture users’ Marks. From there we started experimenting with visualizing the Marks in 3D. One of the first challenges we had to address was making the experience accessible to as many as possible – a mandate from Mozilla’s mission statement. This meant that we couldn’t use WebGL (due to the issues with certain Intel processors), a major setback for any website creating a 3D experience. Adam dove right into addressing this problem, and was able to create a bespoke visual engine that simulated 3D while maintaining an optimized framerate on slower computers. After we had the prototype up and running we added the capability for special marks that could have a quote attached. These would be for notable guest contributors such as Lawrence Lessig, a well-known Internet advocate who also contributed to the Mark Up manifesto.

I gave Mark Up a whirl myself and was instantly captivated by not only how much fun it is to use, but also by the poetic nature of the project’s fusion of art, interactive technology, and the championing of a very important cause. To leave your own Mark, head over to Markup.Mozilla.org, and be sure to pass it along to everyone you know in order to help maintain an open Web. 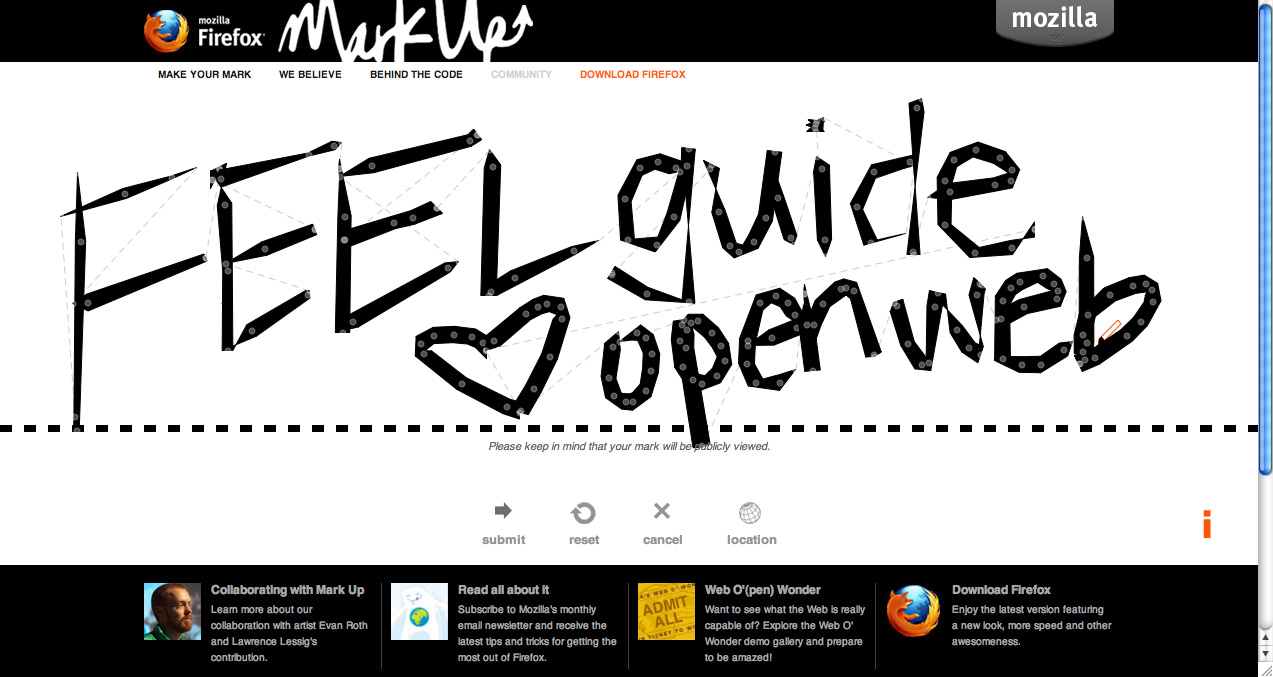 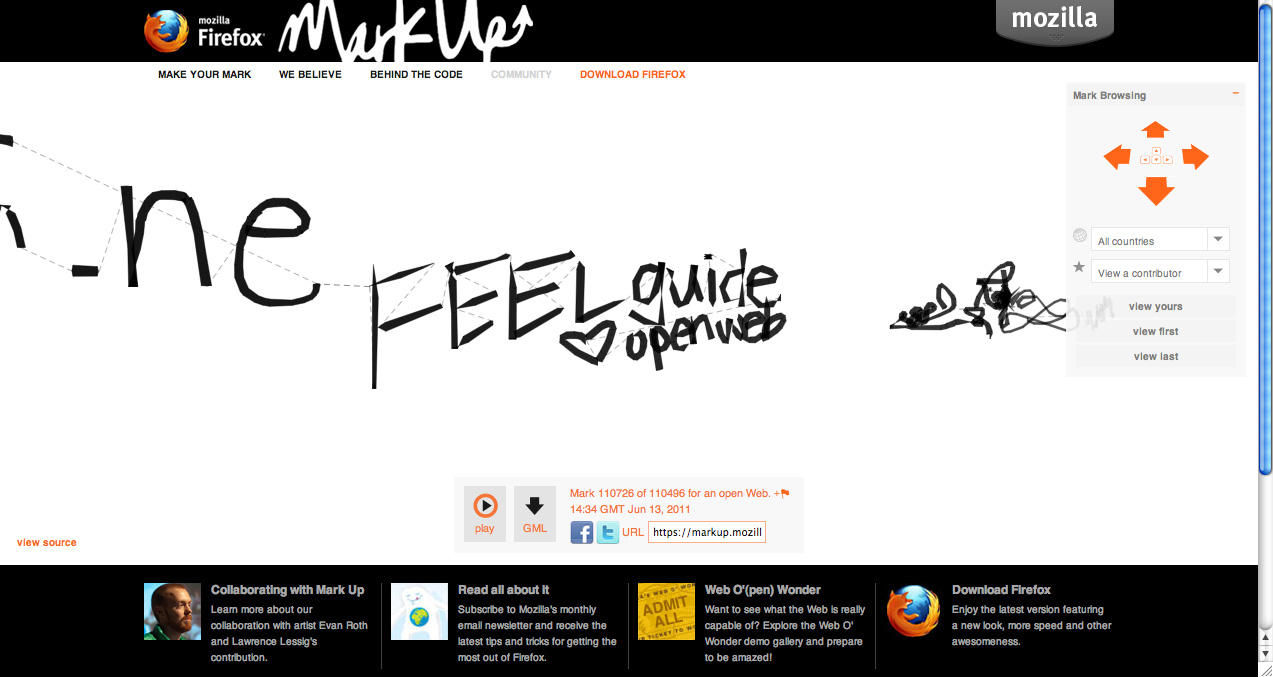 Previous post:
Engineers Invent Nanometal That Can Change From Being Hard To Soft At The Flip Of A Switch Next Post:
The Most Amazing (And Useless) Invention In The World