For seven years-running, Gisele Bundchen (born July 20, 1980) has been the world’s top-earning model by a very comfortable margin.  However, after taking a closer look at her finances, Forbes has predicted Bundchen is easily on track to becoming not only the world’s first billionaire supermodel, but also Brazil’s first self-made billionaire. Aside from her status as one of the most relevant fashion icons in the world, as well as her extremely high-profile campaigns for houses ranging from Versace to Dior, Gisele is deep in the process of carefully branding herself with licensing agreements for jewelry, eco-friendly cosmetics, and lingerie.  Her line of sandals with Grendene™ is a smash worldwide hit, even rivalling the iconic Havainas brand.  According to Grendene’s annual report, the Ipanema line accounts for 63% of the company’s annual export (Revenue Total: $394.8 million, which translates to $250 million due to Gisele’s name).  25 million pairs were sold in 2010 alone.

Gisele’s biggest financial success is yet to come, however, as she eyes Brazil’s surging women’s wear market ($3.45 billion in 2010).  Last May Gisele’s joint lingerie venture with Hope™ (Brazil’s version of Victoria’s Secret) launched, and unlike other women in her position, Gisele actually created her own brand (Gisele Bundchen Brazilian Intimates™) instead of simply licensing her name to the company.  Furthermore she will also own a stake in the company.  According to recent reports, Gisele is poised to add as much as $30 million to her already $45 million annual income.   Last year, Gisele also founded Sejaa Pure Skincare, an environmentally-friendly cosmetics company based in Phoenix, Arizona.  Sources close to Bundchen revealed she is close to selling a stake in the business (of which she owns 100%), and this doesn’t even mention the major coin she’s taking in with her role as Creative Director for fashion retailer C&A’s Gisele Bundchen Collection™.

Forbes began tracking Gisele’s numbers for the Celebrity 100, and her her total income over the past decade has passed the $250 million mark.  Assuming she’s been managing her cash well, spending wisely, and making sound investments, this number will most certainly rise.  Forbes reveals Bundchen has made a significant leap into real estate with a portfolio that includes “a hotel in the south of Brazil, land in the posh northeast city of Trancoso, Bahia, a villa in Costa Rica and a multi-million dollar house that she is building in Brentwood, CA, with husband Tom Brady. The couple bought the land for $11 million, and are reportedly spending another $20 million to build their dream home facing the Santa Monica Bay all the way to Catalina. According to Jeffrey Hyland, from the brokerage firm Hilton & Hyland (he is partners with Ricky and Barry Hilton, the developers of Brentwood Country Estates), it is safe to say that the property’s range will exceed all its costs once it is ready.” 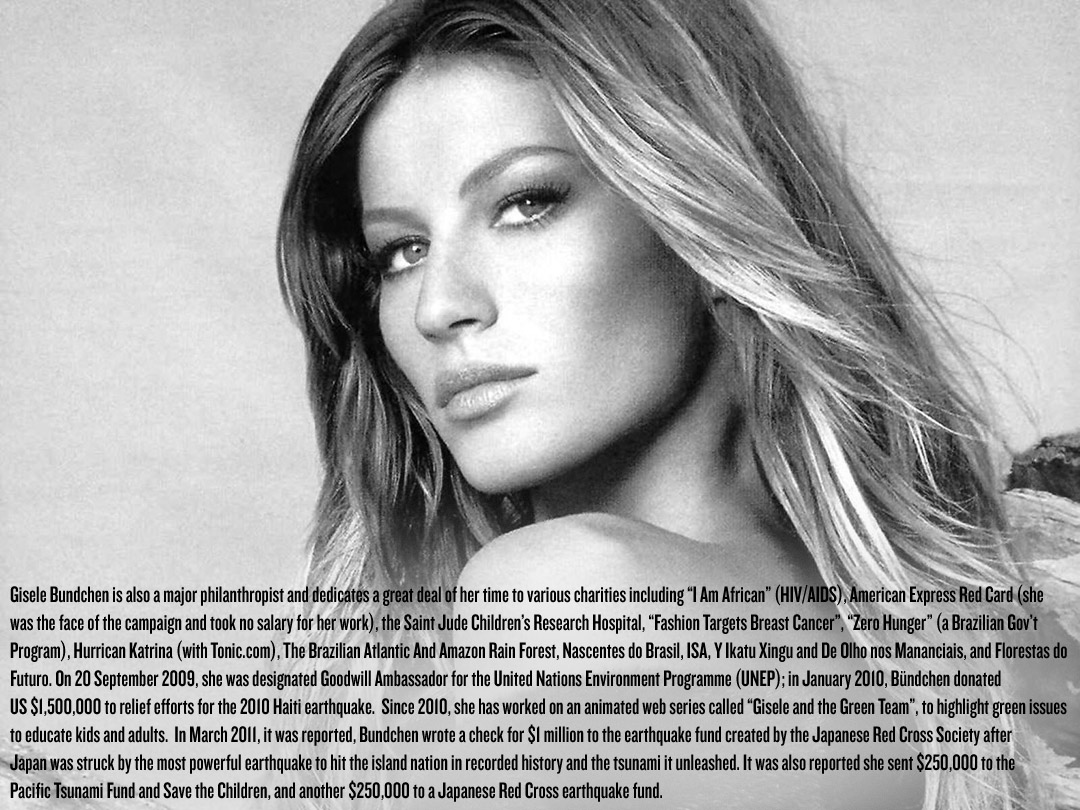