One of my favorite devices in the original Star Trek series was the Tricorder that they used to quickly scan an injured body to get an instant diagnosis and data analysis of the patient.  So it’s a huge thrill this morning to read that the folks at The X Prize Foundation have presented their next $10,000,000 challenge to create the world’s very first working medical Tricorder.  Here’s what I pulled from their press release:

Today in the developed world, preventable medical errors in hospitals result in tens of thousands of deaths per year; preventable medication errors occur at least 1.5 million times per year; and, on average, adults receive only half of recommended care. In the developing world, billions of people have no access to medical care. The Tricorder X PRIZE will award $10 million to the team that develops a mobile solution that can inexpensively diagnose patients by combining expert systems and medical point-of-care data–such as lab-on-a-chip or wireless sensors, provide a recommended course of treatment, and upload all relevant data to the cloud. The prize aims to incentivize consumer empowerment in healthcare by extending the reach of health information and services to more people. As a result, seven billion people around the world can have access to low-cost, reliable, medical diagnostics, which will ultimately prevent pandemics and save lives.

And once again, Wikipedia has proven to be the most amazing resource in the world with this background information of the device: In the fictional Star Trek universe, a tricorder is a multifunction handheld device used for sensor scanning, data analysis, and recording data. Three primary variants of the tricorder are issued in Star Trek’s Starfleet. The standard tricorder is a general-purpose device used primarily to scout unfamiliar areas, make detailed examination of living things, and record and review technical data. The medical tricorder is used by doctors to help diagnose diseases and collect bodily information about a patient; the key difference between this and a standard tricorder is a detachable hand-held high-resolution scanner stored in a compartment of the tricorder when not in use. The engineering tricorder is fine-tuned for starship engineering purposes. There are also many other lesser-used varieties of special use tricorders. The word “tricorder” is a portmanteau of “tri-” and “recorder”, referring to the device’s three default scanning functions: GEO (geological), MET (meteorological), and BIO (biological). The tricorder of the 23rd century, as seen in Star Trek: The Original Series, is a black, rectangular device with a top-mounted rotating hood, two opening compartments and a shoulder strap. The top pivots open exposing a small screen and control buttons. The ship’s doctor uses a variant of this model with a detachable “medical scanner” stored in the bottom compartment when not in use. The 24th century unit is a small, gray, hand-held model with a flip-out panel to allow for a larger screen. This design was further refined later with a slightly more angular appearance that was seen on most of the Star Trek: The Next Generation-era movies as well as later seasons of Star Trek: Deep Space Nine and Voyager.

In the post-Next Generation era (Star Trek Nemesis and Star Trek: Elite Force II), a newer tricorder was introduced. It is flatter, with a small flap that opens on top and a large touchscreen interface.The tricorder prop for the original Star Trek series was designed and built by Wah Ming Chang, one of several futuristic props he created for the show.  Some of his designs are considered to have been influential on later, real-world consumer electronics devices. For instance, his communicator inspired Martin Cooper’s research on mobile telephony. 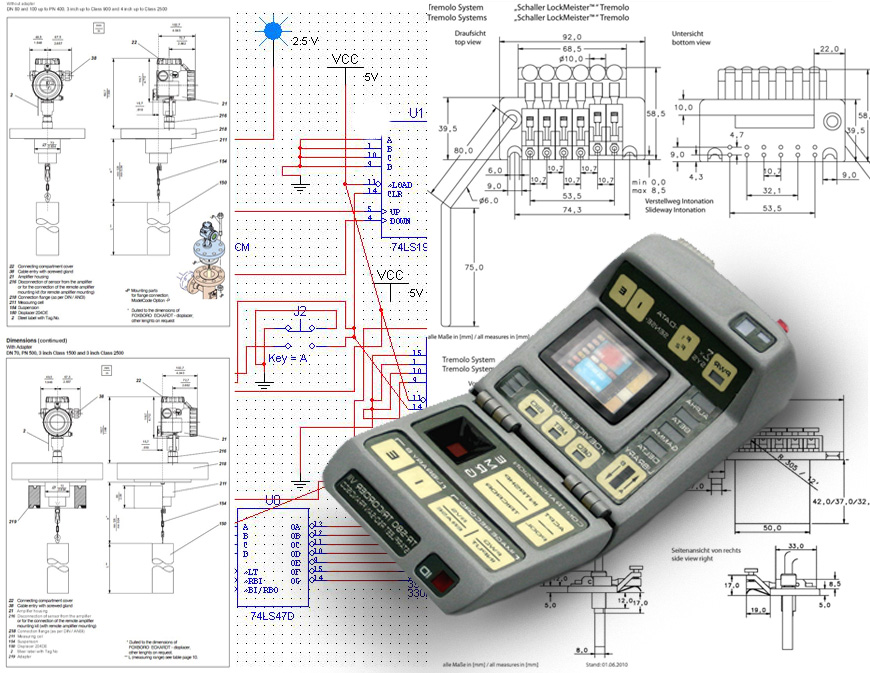