Christopher Hitchens is one of the world’s top public intellectuals and one of the greatest inspirations in my entire life.  So when he announced last summer that he had been diagnosed with esophageal cancer in June I at first recoiled, and then thought to myself that Hitchens is the toughest cookie in the bag and will most certainly show his enemy who’s boss.  However, because of Christopher’s condition I have since learned that this type of cancer is so dangerous it’s survival rate is roughly around 5%.  In January 2011 a round of chemotherapy nearly killed him, and this morning I learned via Sam Harris’s Facebook page that Christopher just lost his voice.  In an essay for Vanity Fair, Hitchens describes the essential relationship between a writer and his/her voice, and in an essay that is unusually melancholic for him, he expounds on what this loss means to him as a writer and as a man.  Here are some excerpts:

On a much-too-regular basis, the disease serves me up with a teasing special of the day, or a flavor of the month. It might be random sores and ulcers, on the tongue or in the mouth. Or why not a touch of peripheral neuropathy, involving numb and chilly feet? Daily existence becomes a babyish thing, measured out not in Prufrock’s coffee spoons but in tiny doses of nourishment, accompanied by heartening noises from onlookers, or solemn discussions of the operations of the digestive system, conducted with motherly strangers. On the less good days, I feel like that wooden-legged piglet belonging to a sadistically sentimental family that could bear to eat him only a chunk at a time. Except that cancer isn’t so … considerate.

When you fall ill, people send you CDs. Very often, in my experience, these are by Leonard Cohen. So I have recently learned a song, entitled “If It Be Your Will.” It’s a tiny bit saccharine, but it’s beautifully rendered and it opens like this: ‘If it be your will, That I speak no more: And my voice be still, As it was before …’ I find it’s best not to listen to this late at night. Leonard Cohen is unimaginable without, and indissoluble from, his voice. (I now doubt that I could be bothered, or bear, to hear that song done by anybody else.) In some ways, I tell myself, I could hobble along by communicating only in writing. But this is really only because of my age. If I had been robbed of my voice earlier, I doubt that I could ever have achieved much on the page. I owe a vast debt to Simon Hoggart of The Guardian (son of the author of The Uses of Literacy), who about 35 years ago informed me that an article of mine was well argued but dull, and advised me briskly to write “more like the way that you talk.” At the time, I was near speechless at the charge of being boring and never thanked him properly, but in time I appreciated that my fear of self-indulgence and the personal pronoun was its own form of indulgence.

My chief consolation in this year of living dyingly has been the presence of friends. I can’t eat or drink for pleasure anymore, so when they offer to come it’s only for the blessed chance to talk. Some of these comrades can easily fill a hall with paying customers avid to hear them: they are talkers with whom it’s a privilege just to keep up. Now at least I can do the listening for free. Can they come and see me? Yes, but only in a way. So now every day I go to a waiting room, and watch the awful news from Japan on cable TV (often closed-captioned, just to torture myself) and wait impatiently for a high dose of protons to be fired into my body at two-thirds the speed of light. What do I hope for? If not a cure, then a remission. And what do I want back? In the most beautiful apposition of two of the simplest words in our language: the freedom of speech.

Be sure to read Christopher’s full essay in Vanity Fair. And in case you haven’t seen 60 Minutes’ profile of Christopher’s life and his current battle with throat cancer, be sure to check it out below.  Perhaps the more people that watch it will lead to a collective consciousness that might somehow be of help to him as he tries so hard to fight off this vicious enemy. 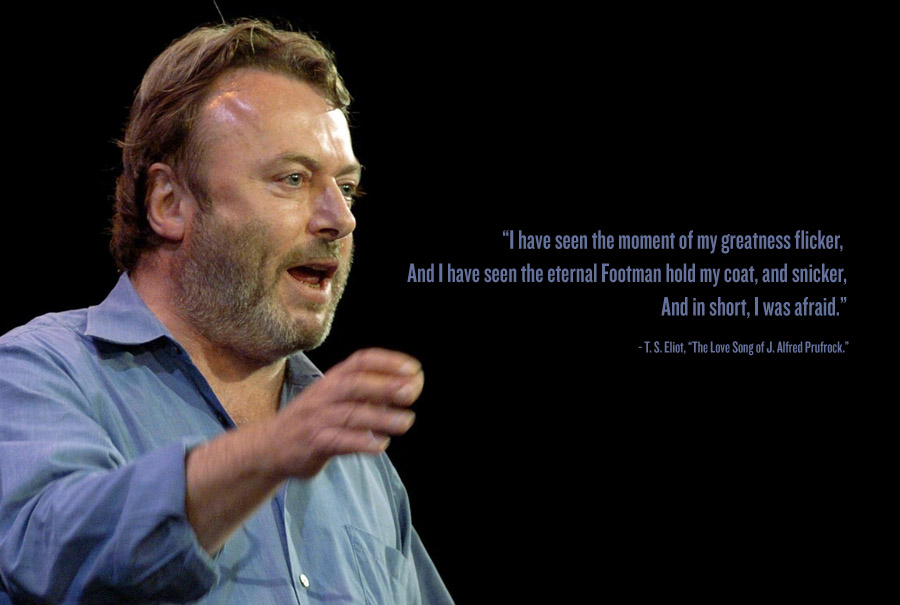 Previous post:
Kristen Wiig’s Honeymoon With Superstardom Next Post:
The Amangiri Luxury Spa And Resort Is The Crown Jewel Of American Southwest Luxury