Did You Know: What Happens To Your Body And Brain On Pot

The proof that humans have been smoking pot forever came with a recent archaeological discovery of a pot stash that is estimated to be upwards of 2,700-years-old (read more HERE).  But it was only in the 1980s when scientists began opening the doors to figuring out exactly what this wizard cabbage does to our brains.  We’ve known for quite some time that the active ingredient in pot is Delta-9-Tetrahydrocannabinol (THC for short) which causes everything from the “high as a kite” feeling, to pain relief, to relief from depression and swelling, right up to acting as a stimulant and a depressant.  So how on earth does one tiny compound do so much?

Back in the Reagan and George Bush The First eras, researchers identified cannabinoid receptors, the long, ropy proteins that are stitched into the surfaces of our cells and are responsible for processing of THC (they also process other chemicals, many of which are found naturally in our bodies).  Once these receptors were discovered, scientists knew exactly where THC was being processed in our bodies and our brains and which systems it was affecting).  From head-to-toe these cannabinoid receptors come in two types: CB1 and CB2 (most of your CB1s are found in your brain and are the ones responsible for the “high”; whereas CB2s are found everywhere else and are connected to immune system function).  This is the main reason why you can come to grand conclusions about metaphysics when watching INCEPTION and reduce swelling at the same time. Cannabinoid receptors first showed up in sea squirts about 500 million years ago; while us humans (and many other creatures) inherited ours from a distant ancestor we share with these simple sea creatures. THC binds to receptors in many other animals besides us, with very similar effects (SEE FIGURE “A” IN DIAGRAM BELOW).

One of the most fascinating scientific aspects of pot is how it revs up appetites.  Even cancer patients who have lost all desire to eat or even smell food, suddenly find themselves regaining their love of food and food smells after ingesting a THC compound (you can read the study HERE).  There are CB1 receptors in your hypothalamus, an area of the brain that regulates appetite, and your body’s cannabinoids send the “I’m hungry dammit!” message to your CB1s.  But when you take THC you end up boosting the number of cannabinoids sending these message to your hypothalamus which is why you need those Doritos so badly.  The discovery of this process has led to a new body of research into safe diet drugs that are able to block these receptors (read about this research HERE).  Therefore, no messages telling you to eat = no need for Doritos.

So you wake up in the morning surrounded by pizza boxes and a busted lava lamp and on top of it all you can’t even remember who was at your place the night before.  Why is this?  According to the book Marijuana and Medicine (published by the National Academies Press): “One of the primary effects of marijuana in humans is disruption of short-term memory. That is consistent with the abundance of CB1 receptors in the hippocampus, the brain region most closely associated with memory. The effects of THC resemble a temporary hippocampal lesion.” Yes, you read it correctly — pot smoking causes brain damage.  THC turns off much of the normal neuroprocessing that takes place in your hippocampus, slowing down your memory as a direct result.  This is why your hazy green memories are so dazed and confused with bits and pieces missing here and there.  It’s not as if you suddenly can’t remember what happened — in actuality, you never even stored the information to begin with.

So your swelling is down, you’ve figured out the meaning of life, your breath smells like rotten pizza and Wunderbars, and you can’t even remember what day it is.  Now you get to add time distortion to the list.  THC has a severe effect on your brain’s dopamine system which creates a stimulant effect.  Stoners often experience excitement, anxiety, and high levels of energy as a result.  Like other stimulants, your sense of time is so distorted that things appear to be passing much, much faster since your brain’s clock is wound up tighter than Charlie Sheen at the Plaza Hotel.  Another reason time is moving so quickly is because, like we just covered, you’re not logging any memories since your brain’s acetylcholine system is all out of whack and can’t store anything in your hippocampus (SEE FIGURE “B” IN THE DIAGRAM BELOW). In an interesting IO9 article last year, they noted how it’s almost as if time is slowing down and speeding up at the same time: “The interesting thing about smoking pot is that marijuana is one of those rare drugs that seems to interact with both the dopamine and the acetylcholine system, speeding up the former and slowing down the latter. That’s why when you get stoned, your heart races but your memory sucks.” (read it in full at IO9). 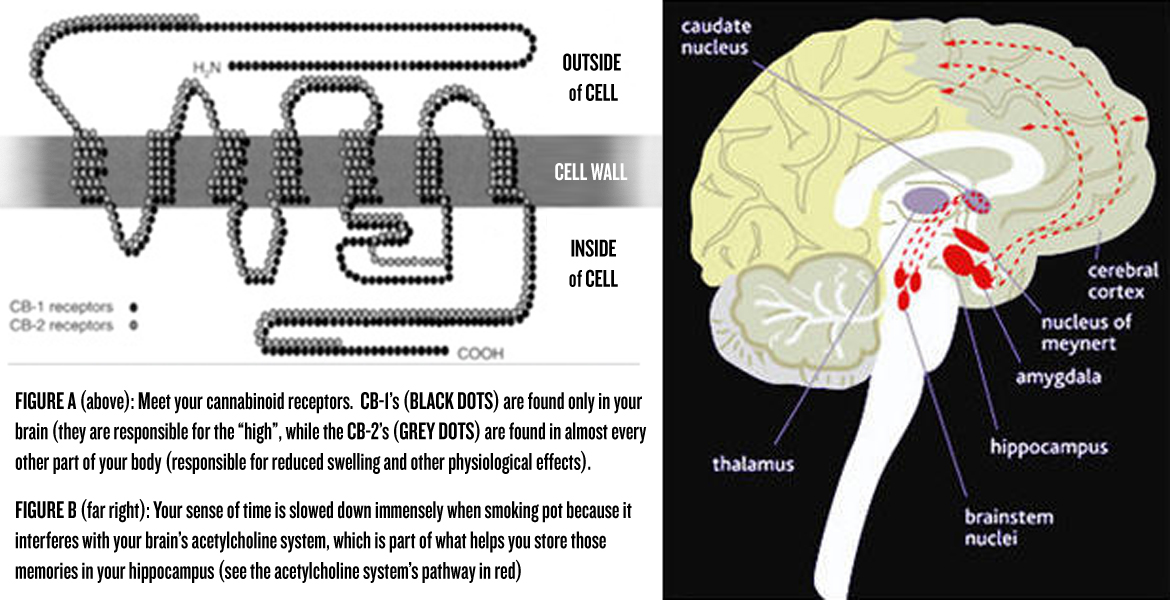 Some braniacs are labeling pot as a major public health danger because of its addictive qualities, and how it’s destroying lives by shutting down the ambition levels of millions of people.  On the other end of the spectrum, experts are calling it a cure for everything from insomnia to glaucoma and advocate its use as a medicine.  The first group want it to be made illegal forever and ever; and the second group want it put in the hands of doctors as a wonder drug.  The level-headers classify it in the same group as coffee and alcohol: bad if you’re hooked, useful and fun in moderation (i.e. “the avoidance of excess or extremes, especially in one’s behavior.”) So who to believe?  There’s clearly some medical usefulness, and as more scientific data comes in this list of uses keeps getting longer.  It’s relieves pressure in the eye, it’s a miracle drug for treating glaucoma which can cause blindness, it’s a neuroprotective (meaning it can actually prevent brain damage — yes, even I’m confused now), and some studies are showing it can mitigate the effects of Alzheimer’s.

Yet we still know for a fact that it turns your memory to mush and could even have as-yet-unknown long term damaging effects (no one has yet proven if it erodes memory strength over time).  And pot smoke is incredibly damaging to the lungs (even more than cigarette smoke).  On top of this, pot can become addictive in some people.  But so is alcohol and tobacco, so why should pot be excluded from the list of legal substances if, unlike alcohol and tobacco, it actually has some health benefits?  It’s clear to me there’s only one place to look for the answer: on our couch, smokin’ a joint, while watching INCEPTION. There’s simply no other way.

Here’s George Will’s take on the legalization of pot:

And Christopher Hitchens’ thoughts on why it’s a “victimless crime”:

Previous post:
Up For Parole? You Better Pray Your Judge Just Had Lunch Next Post:
The Smartest Bowl In The World