The 1993 “60 Minutes” Interview That Launched The Career Of Judge Judy, One Of The Wealthiest and Most Powerful People On Television

I can’t seem to get enough of Judge Judy Sheindlin, the baddest ass bitch on daytime television.  Part Al Pacino from Scarface, part Dorothy Zbornack from The Golden Girls, and part Wicked Witch of The West from Wizard Of Oz (well, at least the outfit), Judy has been blowing the lid off the 3pm slot every day since 1996.  Her no bullshit, lightning-fast, “Don’t fuck with me” attitude is borderline addictive for me, and I must admit: every time I finish watching an episode, deep down I wish I could be a whole lot more like Judge Judy, a whole lot more often.

So how does a crotchety old bag of thunder go from being a feared judge in New York’s family court system to owning one of the top syndicated television programs in the world?  Well a Los Angeles Times profile doesn’t hurt, but if you really want to get the attention of producers you will sit down with 60 Minutes for a feature profile and interview.  That’s exactly what happened to Judy in 1993 after 60 Minutes producers read the LA Times piece on her tough-as-nails New York courtroom. It wasn’t long before her phone started ringing off the hook, and in no time at all she signed her first television contract.  Through the years she’s not only become known as the queen of the court where “justice is dispensed at the speed of light”, but also for her “Judyisms”:

– “Baloney!”
– “Get over it.” (typically used when plaintiff files an unreasonable complaint)
– “If something doesn’t make sense, it’s usually not true.”
– “Sir, you want to say something to me? You sure you want to say something to me?”
– “You mess around with me young lady, I’ll wipe the floor with you. We follow each other?”
– “I being in your position would never humiliate myself in front of 10 million people”
– And if you are a woman who has lent money to your boyfriend, do not expect any sympathy.

The only thing bigger than her attitude is her ratings.  Judge Judy has consistently beat out The Oprah Winfrey Show as the number one syndicated daytime show on the air (10 million viewers per episode), so it’s no wonder the woman commands such an impressive salary. After Oprah’s $315 million income, Judge Judy places a very comfortable second at $45 million (the next is Ryan Seacrest at $15 million).  Judge Judy tapes at the Sunset Bronson Studios, on Sunset Boulevard, in Los Angeles, California, and every other week, Sheindlin flies out on her private jet to tape Tuesday, Wednesday, and Thursday. Although the show is filmed in California, the courtroom is depicted as taking place in New York.

While the cases on Judge Judy are real small claims court cases, the show is not a court of law, but rather an arbitration, and all parties must sign contracts agreeing to arbitration under Sheindlin. The producers’ employees call both parties and ask them questions about their case to make sure it’s suitable for Judge Judy. If the parties agree to be on the show and sign a waiver, agreeing that arbitration in Sheindlin’s court is final and cannot be pursued elsewhere (unless she dismisses the lawsuit without prejudice), their case will air on Judge Judy. The award limit on Judge Judy, as on most ‘syndi-court’ shows (and most small claims courts in U.S.), is $5,000. The award for each judgment is paid by the producers of the show, from a fund reserved for each case. About forty percent of the cases are money judgments, while sixty percent are dismissed.

And here is the 60 Minutes piece that started it all: 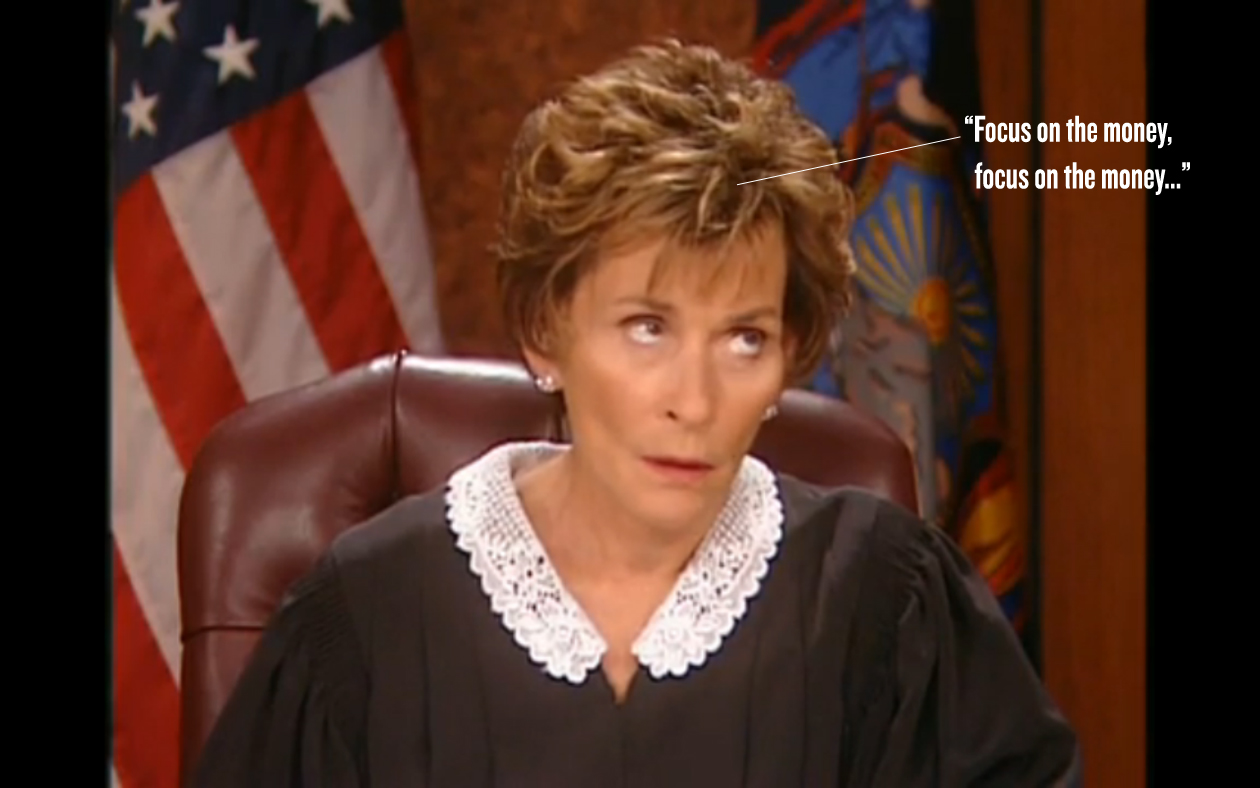