First publised in The New York Times (March 16, 2011) by William J. Broad..☛..A United Nations forecast of the possible movement of the radioactive plume coming from crippled Japanese reactors shows it churning across the Pacific, and touching the Aleutian Islands on Thursday before hitting Southern California late Friday. Health and nuclear experts emphasize that radiation in the plume will be diluted as it travels and, at worst, would have extremely minor health consequences in the United States, even if hints of it are ultimately detectable. In a similar way, radiation from the Chernobyl disaster in 1986 spread around the globe and reached the West Coast of North America in 10 days, its levels measurable but minuscule. The projection, by the Comprehensive Test Ban Treaty Organization, an arm of the United Nations in Vienna, gives no information about actual radiation levels but only shows how a radioactive plume would probably move and disperse. The forecast, calculated Tuesday, is based on patterns of Pacific winds at that time and the predicted path is likely to change as weather patterns shift. On Sunday, the United States Nuclear Regulatory Commission said it expected that no “harmful levels of radioactivity” would travel from Japan to the United States “given the thousands of miles between the two countries.”

On Wednesday, the agency declined to release its Japanese forecast, which The New York Times obtained from other sources. The forecast was distributed widely to the agency’s member states. But in interviews, the technical specialists of the agency did address how and why the forecast had been drawn up. “It’s simply an indication,” said Lassina Zerbo, head of the agency’s International Data Center. “We have global coverage. So when something happens, it’s important for us to know which station can pick up the event.” For instance, the Japan forecast shows that the radioactive plume will probably miss the agency’s monitoring stations at Midway and in the Hawaiian Islands but is likely to be detected in the Aleutians and at a monitoring station in Sacramento.

The forecast assumes that radioactivity in Japan is released continuously and forms a rising plume. It ends with the plume heading into Southern California and the American Southwest, including Nevada, Utah and Arizona. The plume would have continued eastward if the United Nations scientists had run the projection forward. Earlier this week, the leading edge of the tangible plume was detected by the Navy’s Seventh Fleet when it was operating about 100 miles northeast of the Japanese reactor complex. On Monday, the Navy said it had repositioned its ships and aircraft off Japan “as a precautionary measure.” The United Nations agency has also detected radiation from the stricken reactor complex at its detector station in Gunma, Japan, which lies about 130 miles to the southwest. The chairman of the Nuclear Regulatory Commission, Gregory B. Jaczko, said Monday that the plume posed no danger to America. “You just aren’t going to have any radiological material that, by the time it traveled those large distances, could present any risk to the American public,” he said in a White House briefing. Mr. Jaczko was asked if the meltdown of a core of one of the reactors would increase the chance of harmful radiation reaching Hawaii or the West Coast.

“I don’t want to speculate on various scenarios,” he replied. “But based on the design and the distances involved, it is very unlikely that there would be any harmful impacts.”

In Germany on Wednesday, the Federal Office for Radiation Protection held a news conference that described the threat from the Japanese plume as trifling and said there was no need for people to take iodine tablets. The pills can prevent poisoning from the atmospheric release of iodine-131, a radioactive byproduct of nuclear plants. The United States is also carefully monitoring and forecasting the plume’s movements. The agencies include the Federal Aviation Administration, the National Oceanic and Atmospheric Administration, the Department of Defense, and the Department of Energy. 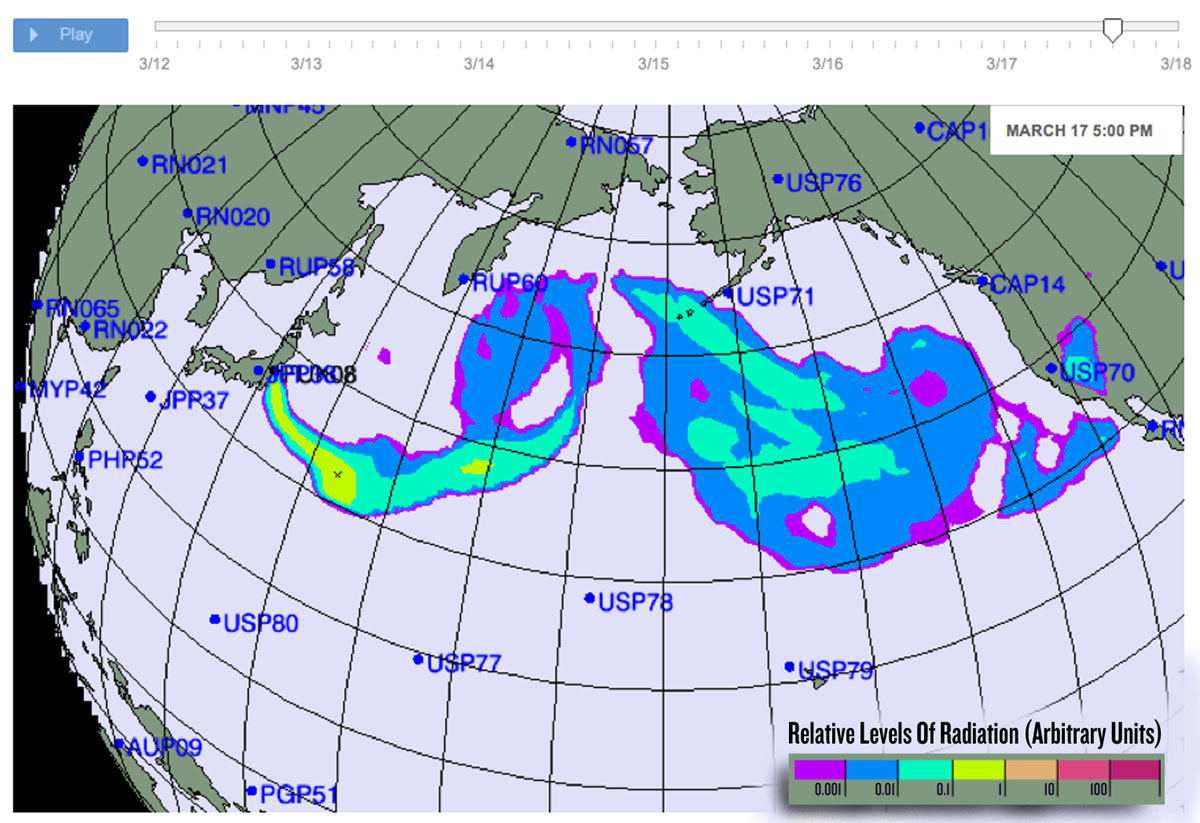