Is It An Option For America To Default On Its Debt?

Renowned economist Dambisa Moyo is an international economist and New York Times best-selling author of both Dead Aid: Why Aid is Not Working and How There is a Better Way For Africa (2009), and How the West Was Lost: Fifty Years of Economic Folly And the Stark Choices that Lie Ahead (2011). In 2009, Moyo was honoured by the World Economic Forum as one of its Young Global Leaders. In May 2009, TIME Magazine named Moyo as one of The World’s 100 Most Influential People. Recently, Moyo spoke at The Commonwealth Club Of California and was asked the question:

“America is already the biggest debtor nation, and maybe a way out of this would be to just stop paying the debt? How likely do you think that is?”

I can honestly say I never even would have thought this would be possible.  Moyo explains the history of defaults in other economies around the world, and gives an interesting take on why America might want its currency to depreciate even further. Her answer is quite fascinating and you can watch the 2-minute video response by clicking HERE. 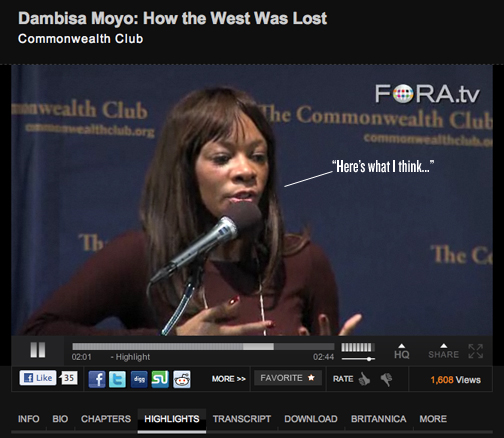