For jet-setting CEOs, academics and artists descending on Long Beach, Calif., this week to schmooze with the likes of Bill Gates and Stanley McChrystal, there’s nothing quite like TED, an annual tech extravaganza billed as the “ultimate brain spa” that costs $6,000 a ticket. For everyone else, there’s BIL. BIL is the “unconference” that has been a tagalong with TED since 2008, held the same week and as close as possible to the more glittering gathering. “BIL sort of formed out of a desire to shadow TED,” says Eric Gradman, a roboticist who spoke at the first BIL, in 2008. For example, Mr. Gradman says, “TED often defaults to, ‘How can we use neuroscience to help the sick?’ and BIL says, ‘How can we use those same technologies to make humans even more awesome?'” A TED spokeswoman, when offered several chances to talk about BIL and its relationship with TED, declined.

While it isn’t uncommon for TED attendees to arrive via private jet, BIL encourages carpools and ride-shares. “Can anyone pick up a late arrival from LAX Sat 9am?,” one person posted on BIL’s online message board. “His name is Peter, he wears cool shirts, he knows better than to check a bag.” Organizers also help arrange couch-surfing. “I’m sure I passed out on somebody’s couch” in 2008, says 30-year-old Mr. Gradman, “but I don’t remember—not because it was long ago, but because I was probably drunk.” Says co-founder Cody Marx Bailey: “The general rule is, have low expectations. If you’re worried about there being a chair, you might want to bring one,” he added. “If you’re worried about there being a lunch, you might as well bring a sack lunch and maybe one for someone else.”

If TED (which stands for “Technology Entertainment Design”) targets the over-achieving baby boomer, BIL—whose name was inspired by the 1989 science-fiction film, Bill & Ted’s Excellent Adventure—caters to the boomer’s tech-crazed offspring. These are people like William Andregg, the 28-year-old founder of a human-genome sequencing firm who sports a hoodie in his corporate headshot and has attended two BILs. BIL takes “the Burning Man approach to learning,” co-founder Mr. Bailey says, invoking the experimental arts festival. TED, which expects more than 1,350 to attend, books speakers such as architect Frank Gehry or Google Inc. co-founders Sergey Brin and Larry Page years in advance, and grants admission, at $6,000 a pop, “at the discretion of the TED team.” BIL, which expects 600 people when it opens Saturday, is free, lets anyone attend and doesn’t schedule speakers until the morning it opens, depending on who shows up. BIL talks tend to focus more on the fringe or theoretical subsets of science and technology. One recent speaker showed off what he said was a brainwave-controlled iPhone application he created. At night, BIL’ders, as they call themselves, hit the local bars in hopes of cozying up to TED attendees. “A lot of them give us invites, or back-channel information on where the party’s at,” Mr. Bailey says. “‘Use this name,’ or ‘Here’s my badge.'” (TED badges are imprinted with a hologram; BIL badges are self-adhesive “My name is…” stickers.) 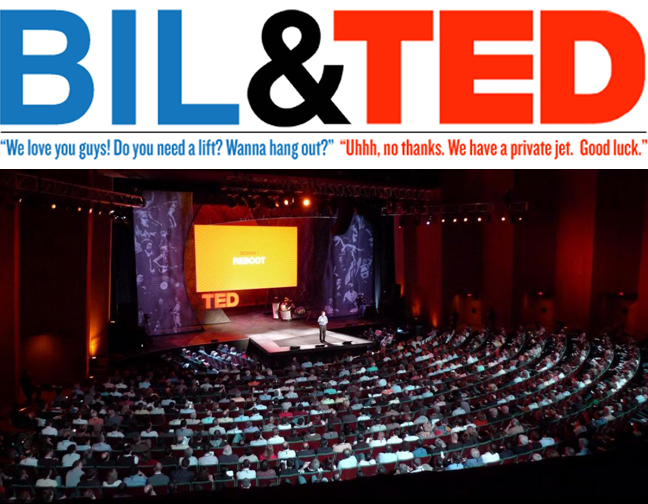 In the weeks leading up to BIL’s 2008 launch, TED organizers, including curator Chris Anderson, eyed it warily, say BIL organizers. Mr. Anderson wrote in an email to BIL co-founder Todd Huffman: “We’ll take your decision to organize the event around TED as a compliment.” But the relationship between BIL and TED has begun to fray. Shortly before the 2009 conference TED organizers learned of a BIL talk scheduled on the topic of how to crash TED talks, according to an email exchange between BIL and TED officials. “As you know, we have had a neutral stance on your conference,” Tom Rielly, a TED official, wrote in an email. “I would love to ask you if you would consider not encouraging crashing of TED in any way,” he wrote, saying he was worried about security for TED’s high-profile members.

On a conference call shortly after, Mr. Huffman says he asked TED organizers if they had ever heard of The Barbra Streisand Effect, referring to an incident in which the singer inadvertently drew attention to unauthorized photographs of her home by trying to suppress them. “They agreed that that was generally something they wanted to avoid,” Mr. Huffman recalls. Mr. Huffman ultimately scheduled the talk in question toward the end of BIL, so TED officials “would have a year to figure out how to respond.” In recent years, as TED has branched out with mini-TED conferences tailored to particular regions or topics, BIL has matched it nearly step for step. “Wherever TED goes, BIL goes,” co-founder Mr. Bailey says. After TED licensed medical-technology and heath-care conference TEDMED, BIL created BIL:PIL. Just like TED, BIL now boasts an event for women (JIL), as well as international offshoots, including a conference planned for Afghanistan.

Some TEDsters have taken up the BIL mantle. The organizer of India-based BIL Chennai, which launched in January, is the chief coordinator of TEDxChennai. And some BIL’ders have fallen for TED’s allure. One, Kai Chang, a former Lehman Brothers Holdings Inc. banker, co-organized last year’s TEDxBerkeley, a TED-licensed event. “It’s almost like Stockholm syndrome,” says two-time BIL’der Joseph Jackson. “He was a big BIL guy, but now he’s running around doing all of this TED stuff because he’s got the TED stamp of approval. And now he wants to come to BIL and talk about his work at TED!” Indeed, Mr. Chang plans to deliver a talk entitled How To Run An Unconference Event at this year’s BIL. “I feel like I’m part of both communities,” he says. “Both have their charms.”