FORBES And The Science Of Success: Winning An Oscar Adds 4 Years To Your Life

First publised in FORBES (February 26, 2011) by Matthew Herper..☛..It’s got to be one of the most cocktail-party-worthy scientific studies ever: a 2001 article in the Annals of Internal Medicine that showed actors and actresses who won Academy Awards lived four years longer than mere nominees. The same researchers followed up in 2005 with a paper showing a similar benefit for directors who won Oscars. The finding, by noted University of Toronto researcher Donald Redelmeier, is important because it may give us information about whether success, in and of itself, makes people healthier. Because it’s so eye-catching, the Oscar-as-life-extender result has been mentioned during the Oscar telecast and covered by the Associated Press and National Public Radio. And by me (HERE and HERE).

Redelmeier’s finding was called into question by a 2006 paper (HERE) that redid Redelmeier’s analysis and found the benefit for Oscar winners was almost entirely due to the fact that living longer gives actors more chances to win. Redelmeier stands by his result, and points to a 2010 analysis of the Oscar data he did with German collaborators. “It’s certainly a lively topic for debate,” he says. You’d never know it from The New York Times’ August 2010 profile of Redelmeier (HERE), who was also the first to make the important and uncontested conclusion that driving while talking on your cell phone is incredibly dangerous. The story started with the Oscar finding, and called Redelmeier “perhaps the leading debunker of preconceived notions in the medical world.” It did not mention that anyone had ever called the Oscar finding into question.

But James Hanley, an epidemiologist at McGill University, did question it. And he stands by his argument, which is based on something called the “immortal time bias.” This idea is probably best explained by the Bill Murray movie Groundhog Day, which didn’t win an Oscar but should have. Because he’s living the same day over and over, the Murray character can do improbable things: memorize an episode of Jeopardy!, learn to play jazz piano,  woo Andie MacDowell. Hanley argues that the same effect is in play with Oscar winners, and Redelmeier and his co-author didn’t properly account for it. You can’t compare Richard Burton, who was nominated, never won, and died at 59, to George Burns, who won an Oscar at age 80 for the 1975 film The Sunshine Boys and then lived to 100, Hanley says. George Burns already had 21 years on Burton at the time of the win. When Hanley did a different kind of statistical analysis that tried to take this into account, he found that the Oscar winners only lived a year longer, and that this could well be due to chance (in scientific jargon, the difference isn’t statistically significant.) Moreover, Hanley says that he sees similar biases leading to erroneous conclusions being drawn throughout medicine.

Redelmeier disagrees with Hanley’s analysis. He points out that if the immortal time bias was really causing the benefit, you’d expect multiple nominees to live longer than those who are nominated once. This doesn’t appear to be the case. Nor is there any benefit for screenwriters. Other researchers have used Redelmeier’s study to argue for a very bold hypothesis: that the stress of economic inequality is bad for public health. The idea is that the best explanation for why Oscar winners would live longer than nominees is that simply being more successful raises them in the social hierarchy. WIRED recently ran a story (HERE) about the effort of one of this idea’s proponents, Robert Sapolsky, to develop a vaccine against the ill effects of stress based on this idea.

Redelmeier has always been open to other explanations. It might be, for instance, that people who win Oscars tend to be healthier or better-equipped to deal with life in general compared with those who don’t. This study was never going to settle the debate about whether or not economic inequality is bad for us. “At the end of the day, it’s never going to be a randomized controlled trial,” says Redelmeier. Randomized controlled trials are the gold standard in medicine. People are randomly assigned to get one treatment or another; in this case, we’d assign the Oscars at random and see if the recipients lived longer. This would mean there would be no immortal time bias–and probably few biases at all. That’s how we know cholesterol drugs like Zocor and Lipitor save lives in patients who have had heart attacks.

I’m not going to settle the debate between Redelmeier and Hanley here. But it does point to a reality that all too often gets plastered over in writing about science: Just because scientists have done a statistical analysis does not mean a new idea is true. Many scientific studies are really suggestions–ideas that are more likely to be true, but not certainties. But the flip side is there are scientific findings of which we can be certain. Newton realized that the force of an impact is equal to an object’s mass multiplied by its acceleration, and that equation has held up ever since.  We know the proteins that make up our body are made from recipes encoded in the DNA inside our cells. The lesson is not to believe every breathless report, but to keep in mind that there are things that are true, and that we’ve figured out some of them. And whether or not winning an Oscar would mean a longer life for Natalie Portman or Annette Bening, it certainly will be exciting both for the actress and the audience. And maybe that has to be enough. 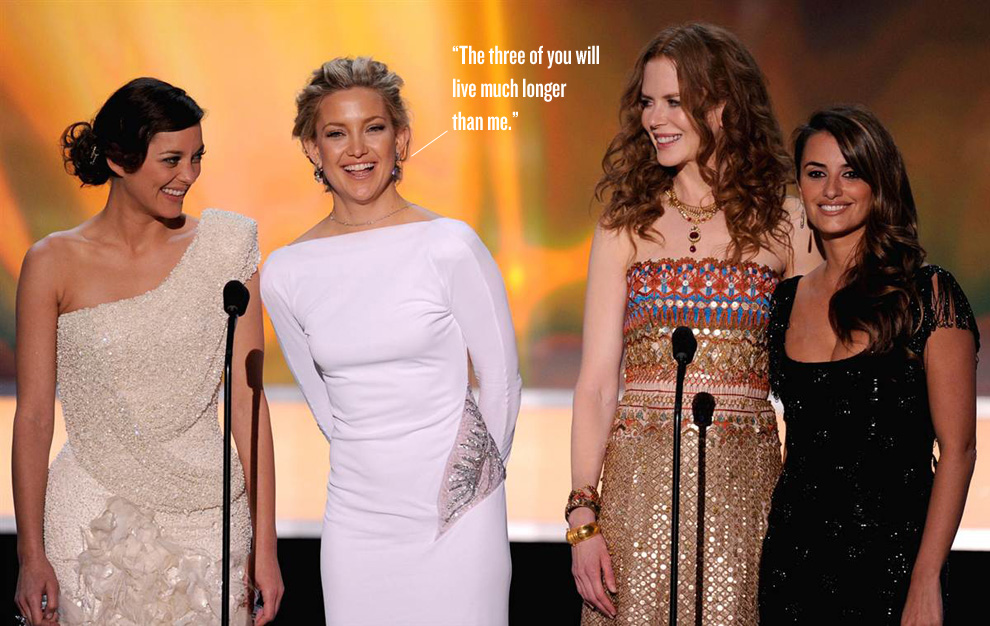