WASHINGTON  |  First publised in The Atlantic (February 17, 2011) by Richard Florida..☛..The big winners in Sunday night’s Grammy Awards took many by surprise. Arcade Fire took home the record of the year for “The Suburbs” and the country group Lady Antebellum’s song “Need You Now” won awards for best record and best song of the year. The former is from Montreal, the latter hail from Nashville.  The internet and social media exploded with a raft of incredulous messages (a Tumblr called “Who is Arcade Fire?” compiled dozens of them).  The “Today” show’s Matt Lauer blurted: “I’ve never heard of the Arcade Fire. I’m going to have to download them.”

Could these wins reflect something of a broader trend?  Is the landscape of popular music changing? Could it be that new upstart music scenes in Nashville, Montreal, and elsewhere are gaining ground on New York and LA, the long-established hegemonic centers of commercial and recorded music? My team and I have been involved in an ongoing project to track the changing dynamics and geography of the popular music industry. The chart below shows some of the preliminary data we have collected.  Compiled by my colleague Ian Swain, who is now our tour with his own band, Bonjay, it uses a statistical measure called a location quotient to chart the concentration of music business establishments–including record labels, distributors, recording studios, and music publishers–in metro areas in the U.S. and Canada with populations over 500,000: 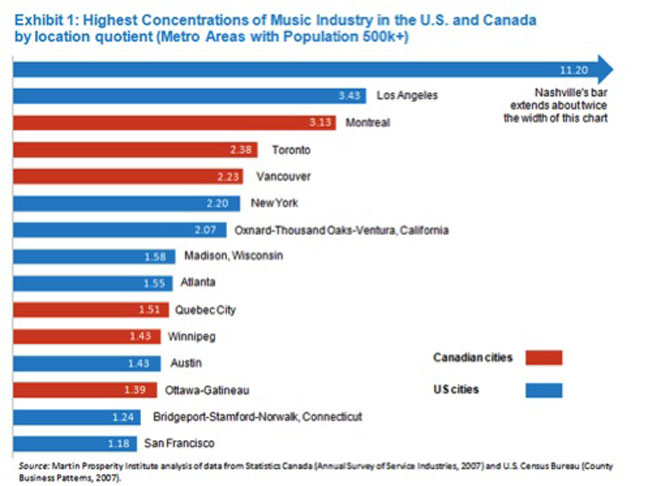 The top ranked city is Nashville, which is literally off the chart.  LA is second, Montreal third, Toronto (where Grammy nominated artists Justin Bieber and Drake hail from) fourth, and Vancouver fifth (home to Michael Buble, winner of the award for traditional pop vocal album), followed by New York in sixth. Nashville has become a major force in the music business. Miranda Lambert was nominated for three Grammys this year and took one home for best female performance for her record “The House that Built Me.”  Alison Krauss, who won the 2009 Grammy for her record “Raising Sand” with Robert Plant, has won 26 Grammys, the third most in history after George Solti and Quincy Jones. Taylor Swift, last year’s Grammy Queen, has a home in Nashville.

Over the past several decades, Nashville transformed itself from a rather narrow country music outpost in the 1960s and 1970s into a major center for commercial music. By the mid-2000s, only New York and Los Angeles housed more musicians. Nashville’s rise is even more impressive when you look at its ratio of musicians to total population. In 1970, Nashville wasn’t even one of the top five regions by this measure. By 2004, it was the national leader, with nearly four times the U.S. average. Today, it  is home to over 180 recording studios, 130 music publishers, 100 live music clubs, and 80 record labels.

While Nashville lacks the diversity of genres found in LA and NY, according to an analysis of MySpace data conducted by my colleague Dan Silver, it has large concentrations of commercial genres beyond country, spanning Christian, pop, rock and punk–so much so, that over the past decade or so Nashville has begun to suck in talent from the rest of the country and the world.  Australian Keith Urban first moved there in 1992; he moved back with Nicole Kidman in 2005. They were shortly joined by the legendary rocker Jack White, who relocated to Nashville from Detroit and established his new multipurpose headquarters, Third Man Productions, where he produced country veteran Loretta Lynn`s “Van Lear Rose,” Wanda Jackson`s “The Party Ain’t Over” emerging acts like the Smoke Fairies and the Black Belles; and  his own records with the  Dead Weather and Raconteurs, as well as remastering and re-releasing his albums with the White Stripes.  The ongoing evolution of Nashville has made it into something of a Silicon Valley of the music business, combining the best institutions, the best infrastructure, and the best talent, as I noted in a post here in May 2009 (“The Nashville Effect”). Though Montreal may not have the commercial punch of Nashville, its musical assets extend far beyond Arcade Fire. In a study of Montreal’s creative economy I conducted with Stolarick and consultant Lou Musante in the early-2000s, we found musicians from around North America relocating there to take advantage of the city’s historic and cultural heritage, openness, and affordable real estate.  Montreal is also home to Cirque de Soleil, a cultural force in its own right.

Upon accepting the award for best record, Win Butler, the leader of Arcade Fire–who hails originally from Texas–noted the bond between music and his adopted city.  “I just want to say thank you, merci, to Montreal, Quebec, for taking us and giving us a home and a place to be in a band.” Talking with reporters after the show he added: “There’s such a beautiful arts scene and music and dance (and) a lot of creative forces there.” This is clearly a guy who thinks a lot about place: his band’s award winning album is titled “The Suburbs.” True, the rise of Nashville and the smaller but influential scenes in Montreal and elsewhere will not threaten the position of LA, NY and London atop the pop commercial music hierarchy.  But intriguing  and influential indie rock scenes have grown up in far flung places, from Austin and Seattle to Portland (home to The Decembrists) and Omaha (home to Conor Oberst), not to mention the rise of Atlanta as an R&B and hip-hop mecca – where the much-talked about meeting between Bieber and Usher took place.

The effects of this extend far beyond music per se. The San Francisco Bay Area, Seattle, and Austin are as well-known for their clusters of entrepreneurial high-tech industry as their music.  Places with flourishing music scenes have underlying economic and cultural systems that are open to new ideas and that enable technology entrepreneurs as well as musicians and artists to mobilize the resources they need to realize their dreams and visions. Understanding the factors that led Win Butler to choose Montreal and caused acts as diverse as Lady Antebellum, Taylor Swift, Alison Krauss and Jack White to end up in Nashville provide a powerful lens not only into our popular culture but the very inner workings of our increasingly idea and talent-driven economy. 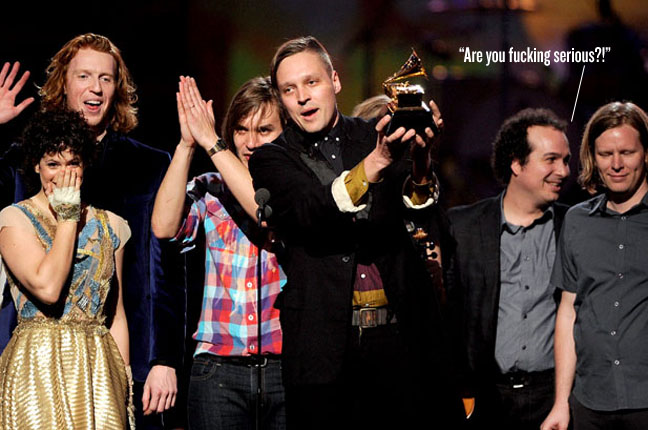 Previous post:
Fish Tank And Bird Cage Hybrid Next Post:
The Guardian Spends A Frantic Night In Berlin With James Franco (And Madonna Too)