WASHINGTON D.C. (first published February 7, 2011) The Daily Beast by TDB Washington Bureau Chief Howard Kurtz..☛..AOL’s surprise purchase of The Huffington Post is, without question, a triumph for Arianna Huffington, for online media, for new and shiny over old and stodgy, and perhaps for AOL, a former powerhouse that is now a hodgepodge of popular and not-so-popular sites. But the deal also raises a slew of inevitable questions about what happens when an entrepreneur builds something that catches on and then sells it to a big corporation.

Can a fast-moving, irreverent, and sometimes racy product keep its DNA once transplanted into a very different corporate culture? How will Huffington herself, a world-champion socialite and talking head as well as online risk-taker, adjust to being someone else’s employee? Could the blockbuster deal produce a jolt of synergy for both sides, or will it carry echoes of AOL buying Bebo three years ago for $850 million—and selling the social-networking site last year for a mere $10 million? One thing is certain: the $315 million deal has rocked the world of the Web since it was announced early Monday.

Huffington told me her relationship with AOL’s chief executive, Tim Armstrong, allayed any concerns she might have. “My vision and his vision are in such alignment,” she says. “He is so passionate about quality journalism and recognizes the need for a clear voice.” As AOL’s new editorial director, Huffington says, her goal will be “making sure we bring together all the different sections that don’t have a clear brand identity—while keeping all the sections that do—in a way that produces better, more high-impact, enterprising journalism.” Some Internet veterans are applauding. “It’s certainly a gutsy move,” says Jim Brady, who headed news and sports for AOL from 1999 to 2003 and ran The Washington Post’s website for a half-dozen years after that. “AOL certainly needs to figure out what it wants to be. I see all these people on Twitter saying that crap plus crap equals crap. I keep laughing about that when it’s coming from people working for companies that nobody would offer $2 million for.” Until now, says Brady, AOL’s image was “stale. People felt they were yesterday’s news. This is a huge shot in the arm. I expect this to be my last job,” Huffington told me.

Jeff Jarvis, a former newspaper and magazine editor who directs the City University of New York’s interactive journalism program, says Huffington will be a valuable asset for her new employer. “What Arianna brings is humanity,” Jarvis says. “She has people who care. She understands the value of passion. She understands the value of curation.” As for the business model of her nearly six-year-old website, Jarvis, who has written for The Huffington Post and cross-posted dispatches from his blog Buzz Machine, says: “There’s this argument, ‘Everyone writes for her for free.’ There’s a reason for that. She brings people together and a place together, and I found value in that. It was brilliant.” Similar questions about identity surfaced when AOL bought the attitude-laden blog TechCrunch in September. One of the site’s columnists, Paul Carr, wrote Sunday that “no one here has been more skeptical than me of AOL’s content strategy” and that he has stood on a stage with Armstrong “and described our overlords as ‘the place where startups come to die.’ And yet, for once I find myself applauding Armstrong—and AOL as a whole—for pulling off a double whammy: a brilliant strategic acquisition at a logical price.” Carr added that “so far AOL has kept true to its promise not to interfere with our editorial and there’s no reason to suppose that will change under Huffington.”

It took AOL nearly a decade to divorce itself from Time Warner after the disastrous 2000 merger that damaged both companies. Steve Case, who co-founded AOL and made that deal, tweeted his reaction to Armstrong’s comment that “1 + 1 will equal 11. Really? That wasn’t my experience.” Mark Potts, a journalist turned Internet consultant, says he is “not blown away” by the deal. “Is Arianna a great editorial thinker?” he asks. “This is AOL’s Hail Mary pass. Aside from the gee-whiz aspect of it, I’m not sure how it helps AOL… I’m not sure what she does. She seems to show up at parties and go on TV. I think she’s the face.” But she will be more than the face of a company that once told America “you’ve got mail,” only to be overshadowed by websites and blogs providing more original and provocative content?

Huffington will oversee an unwieldy collection of sites and subdivisions that include Fanhouse, Engadget, MapQuest, PopEater, Politics Daily, and a web of community-news sites called Patch.

The deal further validates what has been apparent for some time, most recently in themerger of The Daily Beast and Newsweek: that online news and entertainment is an increasingly potent force. And there is a growing convergence between the old media order and the Internet upstarts, with The Huffington Post, for instance, hiring the likes of Howard Fineman of Newsweek and Peter Goodman of The New York Times. Huffington, whose Greek accent has become familiar to viewers of political chat shows, has shown a remarkable ability to keep reinventing herself. Once, she was a conservative activist married to a Republican congressman. Then she was waging a quixotic campaign for California governor. Then she was launching a project to urge car companies to develop alternative fuels. By the time she and partner Ken Lerer launched their website in 2005, Huffington had moved sharply left, and her Post provided a platform for liberal bloggers, scholars, and Hollywood celebrities. “When we started, there were so many skeptics,” she says. But it is a mark of the site’s diversity that she says only 15 percent of its traffic comes from politics. 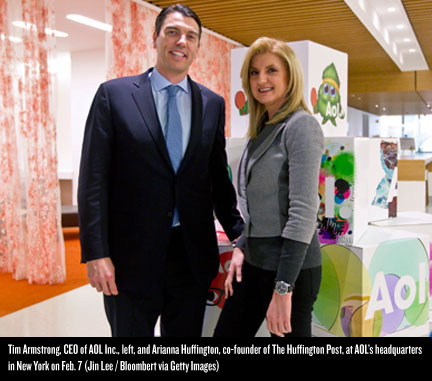 Once primarily an aggregation site, The Huffington Post now devotes branded pages to such topics as food, business, technology, media, divorce, and colleges, and has local editions for New York, Los Angeles, Chicago, and Denver. This wide-ranging smorgasbord—including copious links to gossip items and photos of scantily clad celebs—has brought the site nearly 25 million unique monthly visitors, more than any newspaper site other than that of The New York Times. Its liberal ethos—there are few conservative columnists—has morphed into a kind of populism that often challenges President Obama from the left on such issues as financial reform. Huffington maintains that in the last two years, she has been trying to move beyond “the knee-jerk way of looking at every issue as a left-right issue. It doesn’t help our debate. It doesn’t help in finding solutions. Now I have a much larger platform to keep pressing that point of view.”

The courtship was of the whirlwind variety. Armstrong initiated the talks last month by sending Huffington an email and asking if they could meet. He broached the purchase over lunch at her Brentwood mansion in Los Angeles. The only reason the negotiations didn’t leak, she says, is that “it happened so fast.” While AOL is paying cash for all but $15 million of the purchase price—suggesting the HuffPost partners aren’t exactly high on the company’s stock—Huffington says her payment for her equity stake is a mixture of stock and cash. This, she says, is a “bet” that AOL shares will do better than mere cash. And the 60-year-old Huffington, who is moving to New York, may be getting out of the reinvention business. “I expect this to be my last job,” she told me. “I expect this to be my last act.” Whatever her site’s flaws, Huffington saw a void in the market in 2005, well before Politico, The Daily Beast, or Twitter existed. And that says as much about the old media giants as about her business judgment.

“Why didn’t The Washington Post or The New York Times or CNN create The Huffington Post?” Jarvis asks. “It’s too populist for them. They still think they’re the source of content and value and didn’t see the value in other people’s content.”