Alain de Botton Examines Why Museums Need To Be Much More Than Dead, Uninspiring Libraries

From BBC News Magazine (January 28, 2011):…The other week, I made the suggestion that university departments teaching the humanities are not quite doing their job right and should take a leaf from religion in offering people guidance, rather than just the tools for critical thinking. The idea generated a lot of heat. I’ve rarely received as many emails, roughly split between those who thought I was onto something and those who preferred to have me locked up. But my overall thesis about our need for guidance still strikes me as valid and worth exploring in terms of its repercussions in other areas. So today, with only half an audience to convince, I want to look at museums. One of the things that even committed atheists tend to agree with religious people about is that religions do have some really great art, but militant atheists tend not to get too sentimental or nostalgic about this. If you love art but have no time for God, they tell you, remember that secular societies have developed their own, highly effective means of satisfying the artistic appetites once fed by the faiths – museums.

SENSUOUS: The argument that museums are our new churches has an immediate and seductive plausibility to it. The similarities seem beyond doubt. Like churches, museums enjoy an unparalleled status. They are where we might take a group of visiting aliens to show them what we most delight in and revere. We wander around galleries with the same sort of quiet reverence as we manifest in churches. However, I want to argue that in practice museums abdicate much of their potential to function as our new churches through the way they handle the precious material entrusted to them. While exposing us to objects of genuine importance, they nevertheless seem incapable of adequately linking these objects to the needs of our souls. They don’t do enough with the treasures they have because they present them to us in bland academic ways that fail to engage with the real potential of art, which is – I argue – to change us for the better.

Museums are notoriously bad at telling us why art matters. They vociferously insist on art’s significance and rally governments, donors and visitors accordingly. But they subsequently retreat into a curious, institutional silence about what this importance might actually be based on. Christianity, by contrast, never leaves us in any doubt about what art is for – it is a medium to inspire you to faith, to remind you to be a healthy-minded, good and godly person. Look at that picture of Mary if you want to remember what tenderness is like. Look at that painting of the cross if you want a quick lesson in courage. Look at that Last Supper and train yourself not to be a coward and a liar. A good artist by Christian standards is one who successfully animates the important moral and psychological truths which are in danger of losing their hold on us amid the distracted conditions of daily existence. Christian artists know that their technical talents – their command of light, composition and colour, their mastery of their materials and media – find their ultimate purpose in calling forth appropriate emotional responses from us: our eyes should train our hearts.

EXPLICIT: The German philosopher Hegel defined art as “the sensuous presentation of ideas”. It is, he indicated, in the business of conveying concepts, just like ordinary language, except that it engages us through both our senses and our reason and is uniquely effective for its dual modes of address. We might modify Hegel’s definition to bring it more fully into line with Christianity’s insights. Good art is the sensuous presentation of those ideas which matter most to the proper functioning of our souls, and yet which we are most inclined to forget. This helps us to answer what a church or a museum should, in terms of its art, be about from a Christian point of view. It should be a machine for putting before us pictures, photographs and statues that try to change us, that propagandize on behalf of ideas like kindness, love, faith and sacrifice. It should be a place to convert you.

It’s this effort at conversion, at change, that interests me. I’m a complete atheist and the specific direction in which Christianity tries to change people doesn’t grab me. Nevertheless, I’m very curious about the didactic approach that Christianity takes towards art. I love the way it builds museums and churches not to put pretty things in front of us, but to use pretty things to change us. I try to imagine what would happen if modern secular museums took the example of churches more seriously. What if they too decided that art had a specific purpose – to make us good and wise and kind – and tried to use the art in their collections to prompt us to be so? What if they gave up on the neutral, bland captions they tend to use and put beneath each picture a really directive set of commands telling us, for example, “look at this image and remember to be patient”. Or “use this sculpture to meditate on what you too could do to bring about a fairer world”. 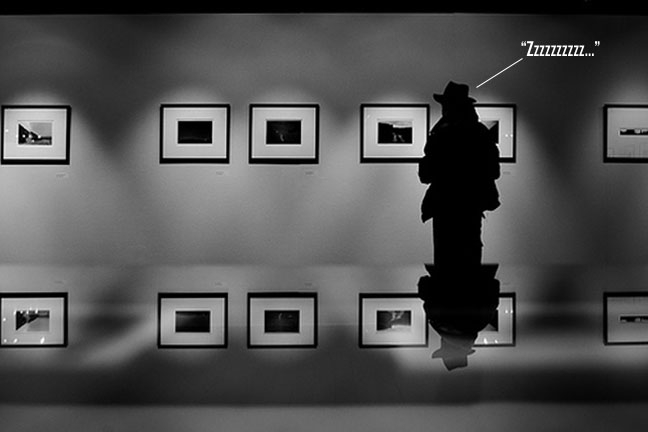 Perhaps art shouldn’t be “for art’s sake”, one of the most unambitious of all slogans. Why couldn’t art be – as it was in religious eras – more explicitly for something? And what if it was for making us kinder and better, more thoughtful and more generous? Modern museums typically lead us into galleries set out under headings such as “the 19th Century” or “the Northern Italian School”, which reflect the academic traditions in which their curators have been educated. However, this arrangement is no more responsive to the inner needs of museum goers than is, to readers, the scholarly division of literature into such categories as “the American Novel of the 19th Century” or “Elizabethan drama”.

AMBITION: A more fertile indexing system would group together artworks from across genres and eras according to the concerns of our souls. Museums would take us through spaces which would each try to remind us in a sensory way – with the help of unapologetic labels and catalogues – of important ideas related to a variety of problematic areas of our lives. There would be galleries devoted to evoking the beauty of simplicity, the curative powers of nature, the dignity of the outsider or the comfort of maternal nurture. A walk through a museum would amount to a structured encounter with a few of the things which are easiest for us to forget and most essential and life-enhancing to remember.

In this revamping we might look for inspiration to a great Christian church, let’s take the church of Santa Maria Gloriosa dei Frari in Venice. Proudly indifferent to the indexing methodology of the academic system, the Frari is committed to the mission of rebalancing our souls with a highly eclectic range of works, including a fresco by Veneziano, a statue of John the Baptist by Donatello, Bellini’s Madonna and Child with Saints and a large altarpiece by Titian. The building throws together sculptures, paintings, metalwork and window traceries from across centuries and regions because it is more interested in the coherence of art’s impact on our souls than in the coherence of the origins and stylistic inclinations of the people who produced the art.

If museums really were to be our new churches, then something like the National Gallery would be reorganised according to the underlying principles suggested by Christian art. The art wouldn’t need to change, just the way it was arranged and presented. The challenge is to rewrite the agendas for our museums so that art can begin to serve the needs of psychology as effectively as, for centuries, it served those of theology. Curators should dare to reinvent their spaces so that they can be more than dead libraries for the creations of the past.

These curators should co-opt works of art to the direct task of helping us to live: to achieve self-knowledge, to remember forgiveness and love and to stay sensitive to the pains suffered by our ever troubled species and its urgently imperilled planet. Only then will museums be able to claim that they have properly fulfilled the noble but still elusive ambition of becoming our new churches.