The Independent (December 11, 2010): .Every schoolchild knows that the “small step for man” and the “giant leap for mankind” are words uttered by Neil Armstrong during the 1969 Apollo 11 Moon landing. But now the famously reclusive astronaut has made a rare foray into the public arena to give an answer to a puzzling question: having gone all that way at such vast expense, why were the steps and leaps so few?

The subject arose when science blogger Robert Krulwich mused on his National Public Radio page about why Armstrong and crewmate Buzz Aldrin had covered an area barely larger than a football pitch. “The trip was a ‘leap’ to be sure, a fantastic accomplishment,” he wrote. “But the first Moon explorers explored an astonishingly small area.” There it might have rested. But much to Krulwich’s surprise, he got an answer – and from the commander himself. In an emailed response, Armstrong, who at 80 is still campaigning to have NASA resume its exploration of the lunar surface, said there were multiple reasons for the small footprint of that first landing, not least among them was the nervousness about how well their water-cooled suits would work.

“We were operating in a near perfect vacuum with the temperature well above 200 degrees fahrenheit with the local gravity only one-sixth that of Earth,” he explained. “That combination cannot be duplicated here on Earth. We did not have any data to tell us how long the small water tank in our backpacks would suffice.”

The reply, from a man who famously refuses to give autographs and long refused to speak about the Moon landings even as his colleagues enthusiastically spoke of their adventures, was surprising enough in itself. Perhaps more surprising still was the detail that an apparently enthused Armstrong went into about the difficulties of exploration. First there was the question of television coverage – for us back on Earth and for mission control. Planting a fixed video camera on the Moon’s surface was one of Armstrong’s first tasks and NASA was very clear that thereafter everything he and Aldrin did had to be within its range of view, which wasn’t large. They wanted to be able to see, for instance, how well they were walking in those clunky outfits. Here we learn, however, that even Armstrong himself was unable entirely to play by the rules. “I candidly admit that I knowingly and deliberately left the planned working area out of TV coverage to examine and photograph the interior crater walls for possible bedrock exposure or other useful information,” he acknowledged. “I felt the potential gain was worth the risk.” Armstrong repeated his disappointment that NASA has not been back and his frustration with those who argue there’s little point, since that space frontier has already been reached.

“I find that mystifying. It would be as if 16th-century monarchs proclaimed that ‘we need not go to the New World, we have already been there. Americans have visited and examined six locations on Luna, varying in size from a suburban lot to a small township. That leaves more than 14 million square miles yet to explore.”

Interesting Tidbits From The Moon:

During the Apollo 11 mission, Buzz Aldrin briefly held up NASA’s schedule when he became the first man to urinate while standing on the Moon. While millions watched at home on live television, Aldrin made use of a tube fitted inside his space suit to relieve himself.

In 1971, Alan Shepard became the first man to hit a golfball on the Moon. After successfully smuggling a club head and balls on to the Apollo 14 inside his spacesuit, Shepard took the opportunity at the end of the moonwalk to hit two balls. He later joked that they went “miles and miles and miles”.

In 1972, the astronaut Harrison Schmitt of the Apollo 17 mission added a musical soundtrack to planned proceedings. While skipping along the surface of the Moon, he sang: “I was strolling on the Moon one day / in the merry, merry month of… December…” 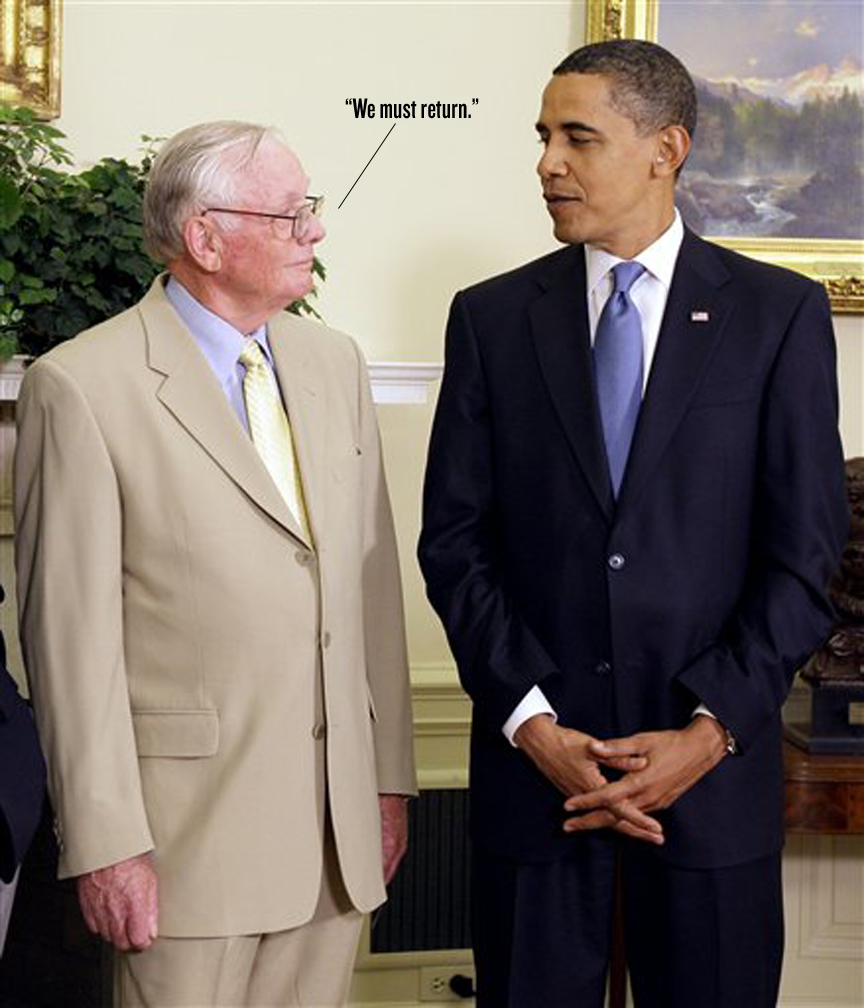 Previous post:
Fascinating Infographic Shows Why Marriages Collapse Next Post:
The Tom Hardy Photo Gallery The World Has Been Waiting For