A group of leading Federal and California scientists convened in California’s state capital of Sacramento last Friday for a 2-day summit warning of the near 100% probablility that the entire state will be struck by a water storm of epic scale that would cause 4X-5X the amount of damage that a massive earthquake would produce.  The “ARkStorm Scenario,” prepared by the U.S. Geological Survey and released at the ARkStorm Summit in Sacramento on Jan. 13-14, combines prehistoric geologic flood history in California with modern flood mapping and climate-change projections to produce a hypothetical, but plausible, scenario aimed at preparing the emergency response community for this type of hazard. The USGS, the Federal Emergency Management Agency and the California Emergency Management Agency convened the two-day summit to engage stakeholders from across California to take action as a result of the scenario’s findings, which were developed over the last two years by more than 100 scientists and experts.

NEW YORK | The New York Times (published on January 15, 2011): Combining advanced flood mapping and atmospheric projections with data on California’s geologic flood history, over 100 scientists calculated the probable consequences of a “superstorm” carrying tropical moisture from the South Pacific and dropping up to 10 feet of rain across the state. “Floods are as much a part of our lives in California as earthquakes are,” said Lucy Jones, the chief scientist for the United States Geological Survey’s multi-hazards initiative, adding, “We are probably not going to be able to handle [this one].” The geological survey estimates that such a storm could cause more than $300 billion in damage. The scientists’ models estimate that almost 1/4 of the houses in California will experience some flood damage. The conference was convened by the geological survey, FEMA (Federal Emergency Management Agency) and CEMA (California Emergency Management Agency) to help disaster-response planners draft new strategies to limit the storms’ impact. Climate scientists have for years noted that the rising temperature of the earth’s atmosphere increases the amount of energy it stores, making more violent and extreme weather events more likely. The existing engineering systems that dispose of floodwater are so efficient that the effects of moderate storms often go unnoticed, Dr. Jones said. So while many Californians know whether they live or work close to an earthquake-prone fault and what to do should there be a serious quake, few realize that the state could be hit by storms that at their worst could dwarf even the largest hurricanes that have devastated the Gulf Coast and the southeastern Atlantic Seaboard. Vast California floods have been documented, both through tree-ring data and more modern historical records. Marcia K. McNutt, the director of the geological survey, said that 150 years ago, over a few weeks in the winter of 1861-62, enough rain fell to inundate a stretch of the Central Valley 300 miles long and 20 miles wide, from north of Sacramento south to Bakersfield, near the eastern desert. The storms lasted 45 days, creating lakes in large swaths of the state and, according to a survey account, “turning the Sacramento Valley into an inland sea, forcing the state capital to be moved from Sacramento to San Francisco for a time, and requiring Governor Leland Stanford to take a rowboat to his inauguration.” Just like a major earthquake, a superstorm could be a severe blow to North America’s agriculture and food supply, as well as to the water supply system that now diverts water from the north to Southern California. Dr. Jones said in an interview that improved satellite imagery available in recent years allowed scientists to clearly identify what they call “atmospheric rivers” (moisture-filled air currents up to 200 miles wide and 2,000 miles long) which flow from tropical regions of the Pacific Ocean to the West Coast. The West Coast winter weather systems popularly known as the Pineapple Express systems (air currents carrying moisture from the Hawaiian Islands) are just one moderate subset of these rivers in the sky, Dr. Jones said. The abbreviation for atmospheric river, A.R., gave the geological survey the root of its name for these major weather events, which they call ARk Storms.

The group of experts also pointed out that meteorological, geological, and environmental data has shown that even larger storms than this have hit California in the years 212, 440, 603, 1029, 1418, and 1605.  You can learn more at the USGS website, The New York Times, and Perez Hilton. 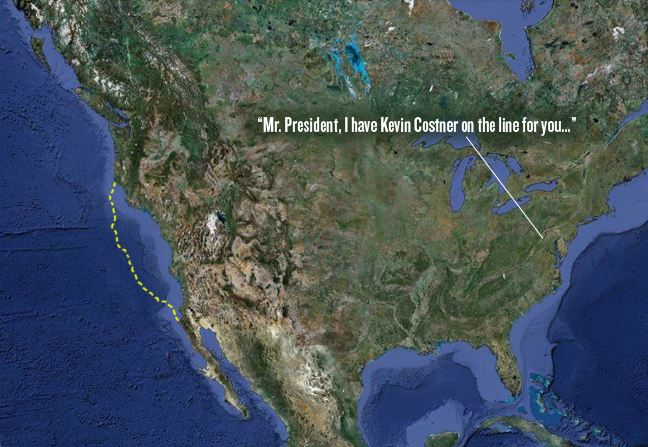