“Love And Polyamory” From Intelligent Life (May 2010): If you are having trouble finding “The One”, then spare a thought for polyamorists, who must also find “The Two”, “The Three” and, in some cases, “The Three and a Half”. “Finding the right partner is hard,” says Erich, a polyamorist (who prefers not to disclose his surname). “Finding the right partner whose partner is also right…” Erich shakes his head. “Now that’s really hard.”

As anyone with a passing knowledge of professional golf, royal families or Premier League football understands, the practice of taking several lovers is hardly novel. What makes polyamory unique is that everyone knows about each other and is even pleased about it. Sometimes they even become lovers themselves. Unconventional though it may sound, polyamory—or “many loves”—is becoming more prominent. In America the poly-pride movement holds large rallies; last year Britain’s first poly website was launched, and recently published poly books, such as “Open” and “The Ethical Slut”, are promoting polyamory in print. Mo’Nique, an Oscar-winning American actress, freely discussed her open marriage in a televised interview with Barbara Walters recently. Polyamory is hardly common, but its adherents are seemingly multiplying. Maxine Green, a 28-year-old artist with pink hair, explains why she is a polyamorist.  “Monogamy just never made any sense to me,” she says. “I just couldn’t imagine being with one person forever.” After a moment’s thought, she says she has “two and a half” partners, including Erich. The couple has been together for a year, though Maxine’s other relationships have been going for four.  “It’s a bit like ice cream,” she explains. “I love chocolate ice cream. But I wouldn’t want to eat nothing else for the rest of my life.” Yet one is not usually in a position of comforting a chocolate scoop after a night out gorging on strawberry. Hurt feelings don’t seem to be part of the polyamorous lifestyle. “I don’t consider myself to be ‘unfaithful’,” Maxine explains. “As long as I spend enough time with someone, then I feel I’m being faithful to that person.” How much time is enough? “As much time as it takes for everyone to be happy.” This can vary from several evenings a week to once every few months, depending on whether one is dealing with a “primary” or “secondary” partner.

If polyamory differs from conventional romantic relationships, it is also unlike the more familiar unconventional ones, too. This is something that polyamorists are often at pains to clarify. For example, unlike most polygamous arrangements, polyamory is not religiously motivated, and practitioners are split evenly between men and women. Indeed, Erich suggests that polyamorists are often atheists. “Polyamory is not like swinging,” he insists. “This is emphatically not only about sex, it is about long term relationships.” Surely such arrangements invite feelings of jealousy, or insecurity? “Not at all,” says Erich. “On the contrary, I feel more secure now, because I am not defined by being one half of a couple: I am complete as myself.” Or, as Maxine puts it: “The knowledge that my partners return to me because they want to, rather than because they know they must, gives me a wonderful boost.” Though both concede that “Polyamory is not for everyone. Some people can’t cope with it.” 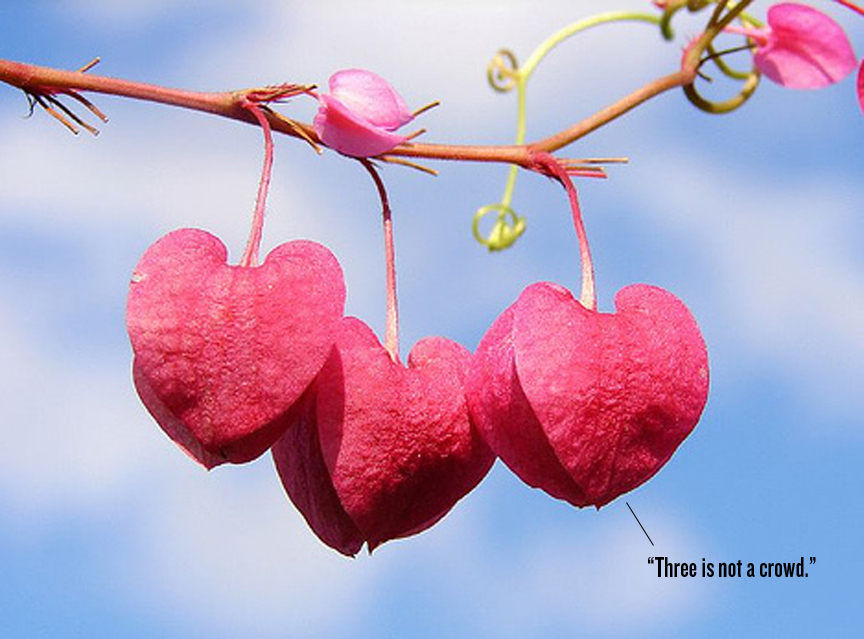 Some argue that polyamorists have a particularly healthy approach to dealing with inevitable romantic pratfalls. “They haven’t eliminated the problem of jealousy,” observes Andrew Samuels, a professor of analytical psychology. “There are of course still difficulties within polyamorous relationships…but they are dealing with it rather than denying it. I have been extremely impressed by the amount of thought, care and attention that polyamorous couples expend on their relationships.” To this effect, Erich suggests that polyamory is fundamentally more honest than monogamy. “People have always slept with more than one person,” he says. “But previously, such relationships would usually have been concealed. We are simply being open about it.” Occasionally Maxine, Erich and their other halves (and quarters, and possibly even eighths) all meet together for a dinner party. When they do, says Erich, they all get along ‘fabulously’. Though, in practice, such events rarely happen. Less, explains Maxine, because of social difficulties than temporal ones. “Time management is tricky,” she says. “Being polyamorous means you have a lot of people to juggle.”

So convinced is Erich of the virtues of polyamory that he feels it will, one day, become the norm. “Fifty years ago pre-marital chastity was unquestioned,” he says. “Now it seems little more than a peculiarity. One day monogamous relationships may be seen in a similar light.” However, just as the threat of pregnancy once provided an obvious incentive to avoid pre-marital sex, surely child-rearing offers an analogous reason for a more conventional single-partner commitment? Not for Erich. “The polyamorous community is perfect for raising children,” he says. “Instead of the nuclear ‘ideal’ in which one person must stay at home, looking after the children—and going crazy—the poly marriage is more like that pre-industrial ideal, in which each child has several adults caring for it, and each parent has a great deal of support. Poly children are some of the most sorted and socialised I know.”

The notion of polyamory is still widely greeted with scepticism. Joan Roughgarden, a biologist at Stanford University in Palo Alto, California, also serious reservations about the lifestyle. “The likelihood of being able to successfully raise children in that context is very limited,” she says, “My guess is that it’s not an evolutionary advance, but a liability.” Samuels would disagree. “What children really need for mental well-being is love, consistency and boundaries. The sexual behaviour of the parents has absolutely no impact on a child’s mental health,” he says. “Indeed, if anything, the polyamorous relationships I have seen provide a more favourable environment for children because the polyamorous parents, aware of their unusual situation, think so carefully about every aspect of what they do.” He is convinced this lifestyle is spreading. “Polyamory is the fastest growing style of relationship,” he says.

Precise numbers on polyamorous relationships are difficult to find. Thus far polyamorists have proved rather shy about giving data on their habits. However studies quoted recently in Newsweek put the number of polyamorous families in America at over half a million. Each September Erich and Maxine organise an annual polyamory forum. The last was the biggest yet, with 300 attendees, up from 100 a few years ago. It featured seminars, discussion groups and “fun and games workshops.” This is not a euphemism, Erich clarifies. “Fun and games means charades,” he says, firmly. “Orgies do happen,” he admits. “But they really are not the point of what we do. The point of polyamory is to enable people to have loving relationships with more than one person.”

“But why,” I ask for a final time, “must a loving relationship include sex?” Erich looks at me and rejoins, “But why must it not?”