Designer Darren Gilford hoped the Light Cycle, the sleek speeder that swirls trails of neon in Tron: Legacy, would be the “sexiest, coolest vehicle you could possibly imagine.” Gilford, Daniel Simon, and a team of concept artists tried to avoid alienating fans of the 1982 cult classic by drawing inspiration from the bike’s original design, a boxy pixilated vehicle that was severely hampered by 1980s technology. Three decades later, the Light Cycle has morphed into a glossy prowler, with hubless wheels and loops of light that blur where the bike ends and the body begins.  Fast Company spoke with Gilford about the original film, designing the Light Cycle, and the limitations of engineering concept vehicles.

The Light Cycle is so central to this film’s hype, from the toys to the trailers to the video games. What was the design process like for the vehicle?

There’s so much back story. I first met [director] Joe Kosinki almost four years ago. There was this very secretive little project coming through Disney, sort of a proof-of-concept. They wanted to do a test to see what Joe’s vision was–they wanted to see how this piece of the puzzle would be handled–and it was the Light Cycle sequence. I worked with Joe very early on. There was another artist who had taken a pass at the Light Cycle, and I had my own ideas where I wanted to take his design. I started doing 2-D conceptual drawings. Obviously, we are paying homage to the original movie and to Syd Mead, who is a legend and a god in my business, and in many ways, my education. Syd had done Light Cycle sketches for the first movie, and he had originally done an open-cockpit design, where you can see the rider on top of a beautiful surface. But back in the day, the technology was so rudimentary, they just couldn’t render a full body. The rendering horsepower was so limited, and they had to do a fully enclosed bike–that closed canopy design.  We wanted to bridge that gap, and we knew we wanted a bike that grew into the rider. You could see the rider–you could see his forms and his shapes, but blur the lines between where the bike ends and the rider begins.  Light is such an important aspect of everything in Tron–how light wraps around things, how light carries your eyes from the front to the back of the vehicle. Light was the glue that held everything together.  One of the things I’ve always been fascinated by is hubless wheel design. I loved that concept. For engineering purposes, it’s next to impossible to actually pull that off. I did some sketches, and it worked. One profile sketch really early on showed just a light line on a dark background with a dark bike. The light line was kind of the silhouette, and you saw the circles of the wheels and one light line that connected the rider between the two wheels. That was the sketch that locked the design in.  The bike for the test was maybe 60% of the way there from what you see now. Once the test went well and debuted at Comic-Con, that was the turning point for us. At the same time, Joe and I found this book called Cosmic Motors from this new conceptual artist, Daniel Simon, this automotive designer who was the first guy I’ve ever seen that was conceptualizing in 3-D. He is an incredible 3-D artist. We reached out and made a commitment that we wanted him to work on this movie. I would say I got the Light Cycle 60% of the way there, but I can’t take credit–it was Daniel’s final design. His sense of styling and automotive history and detail really brought this design to fruition. I would say Daniel’s design is probably one of the most iconic vehicles ever brought to screen.

Part of the design process must be to make the vehicle cool, right? I think back to the speeder in Return of the Jedi or the Delorean in Back to the Future–iconic vehicles that people want to have whether or not they actually exist.

Of course. I was an automotive designer in school, and getting an opportunity to work on something as iconic as the Light Cycle is an absolute dream come true. I wanted to make the sexiest, coolest vehicle you could possibly imagine. The luxury of designing vehicles like this is that we’re not beholden to the limitations of engineering and traditional road requirements. We have the luxury of playing with all of the elements just purely visual, making them as fun as we can.

You’re not beholden to the limits of engineering, but did you actually build a Light Cycle?

How did you update the vehicle without alienating the cult following of the original film?

That was another huge challenge. There’s another retro Light Cycle in our movie that bridges the gap between the new and original design. It is Flynn’s closed canopy bike. It’s like his California Ferrari that he’s been keeping in the garage for 20 years. You can absolutely see Syd Mead’s design, but it’s been updated. And with our new bike, it creates a timeline. If you put those three bikes together, you can see the progress–the lineage of Tron. 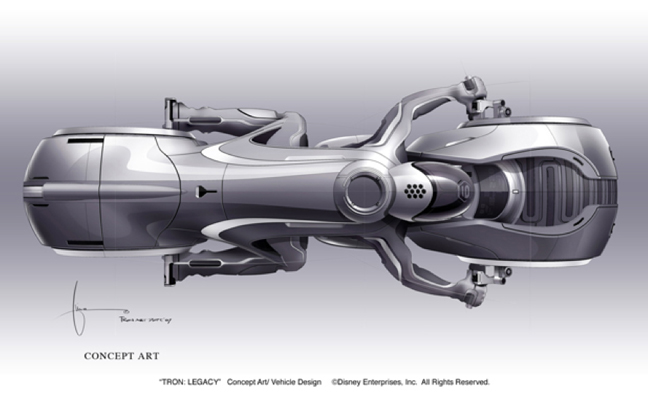 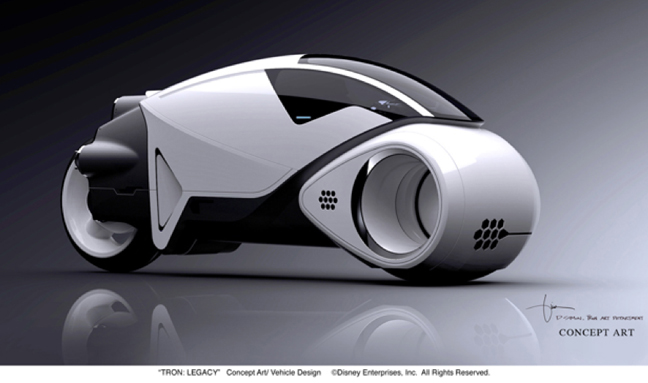 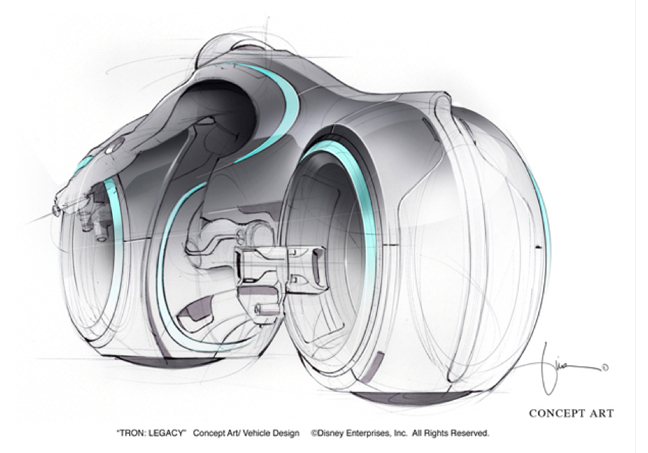