There’s something exciting afoot in the world of cosmology. Last month, Roger Penrose at the University of Oxford and Vahe Gurzadyan at Yerevan State University in Armenia announced that they had found patterns of concentric circles in the cosmic microwave background, the echo of the Big Bang.  This, they say, is exactly what you’d expect if the universe were eternally cyclical. By that, they mean that each cycle ends with a big bang that starts the next cycle. In this model, the universe is a kind of cosmic Russian Doll, with all previous universes contained within the current one.  That’s an extraordinary discovery: evidence of something that occurred before the (conventional) Big Bang.

Today, another group says they’ve found something else in the echo of the Big Bang. These guys start with a different model of the universe called eternal inflation. In this way of thinking, the universe we see is merely a bubble in a much larger cosmos. This cosmos is filled with other bubbles, all of which are other universes where the laws of physics may be dramatically different to ours.  These bubbles probably had a violent past, jostling together and leaving “cosmic bruises” where they touched. If so, these bruises ought to be visible today in the cosmic microwave background.  Now Stephen Feeney at University College London and a few pals say they’ve found tentative evidence of this bruising in the form of circular patterns in cosmic microwave background. In fact, they’ve found four bruises, implying that our universe must have smashed into other bubbles at least four times in the past.  Again, this is an extraordinary result: the first evidence of universes beyond our own.

So, what to make of these discoveries. First, these effects could easily be a trick of the eye. As Feeney and co acknowledge: “it is rather easy to fifind all sorts of statistically unlikely properties in a large dataset like the CMB.” That’s for sure!  There are precautions statisticians can take to guard against this, which both Feeney and Penrose bring to bear in various ways.  But these are unlikely to settle the argument. In the last few weeks, several groups have confirmed Pernose’s finding while others have found no evidence for it. Expect a similar pattern for Feeney’s result.  The only way to settle this will be to confirm or refute the findings with better data. As luck would have it, new data is forthcoming thanks to the Planck spacecraft that is currently peering into the cosmic microwave background with more resolution and greater sensitivity than ever.  Cosmologists should have a decent data set to play with in a couple of years or so. When they get it, these circles should either spring into clear view or disappear into noise (rather like the mysterious Mars face that appeared in pictures of the red planet taken by Viking 1 and then disappeared in the higher resolution shots from the Mars Global Surveyor).  Planck should settle the matter; or, with any luck, introduce an even better mystery. In the meantime, there’s going to be some fascinating discussion about this data and what it implies about the nature of the Universe. We’ll be watching. 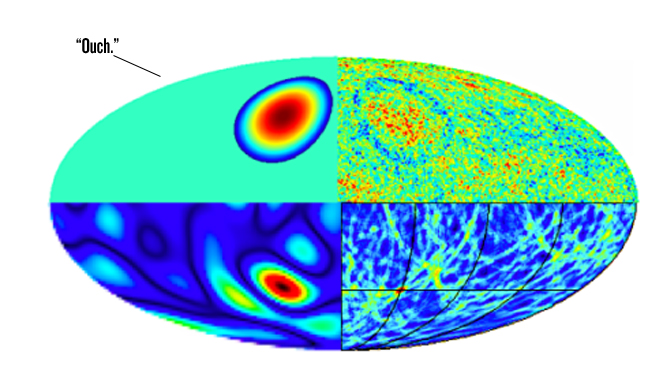 One Response to Astronomers Discover Four Bruises At Outer Edges Of Cosmos, Providing First Evidence Of Other Universes