A spacecraft has tasted oxygen in the atmosphere of another world for the first time while flying low over Saturn’s icy moon, Rhea.  Nasa’s Cassini probe scooped oxygen from the thin atmosphere of the planet’s moon while passing overhead at an altitude of 97km in March this year.

Until now, wisps of oxygen have only been detected on planets and their moons indirectly, using the Hubble space telescope and other major facilities.  Instruments aboard Cassini revealed an extremely thin oxygen and carbon dioxide atmosphere that is sustained by high-energy particles slamming into the moon’s surface and kicking up atoms, molecules and ions.  Astronomers have counted 62 moons orbiting Saturn. At 1500km wide, Rhea is the second largest and is thought to be made almost entirely of ice.

“This really is the first time that we’ve seen oxygen directly in the atmosphere of another world,” said Andrew Coates, at UCL’s Mullard Space Science Laboratory, a co-author of the study published in the journal Science.  “Active, complex chemistry involving oxygen may be quite common throughout the solar system and even our universe,” said team leader Ben Teolis of Southwest Research Institute in San Antonio, Texas. “Such chemistry could be a prerequisite for life. All evidence from Cassini indicates that Rhea is too cold and devoid of the liquid water necessary for life as we know it.”

Rhea’s atmosphere makes it unique in the Saturn system. Only Rhea and Titan, the largest Saturnian moon, have enough mass to hold on to an atmosphere with their gravity. Titan, however, has a very thick nitrogen and methane atmosphere, with very little carbon dioxide and oxygen.  Astronomers have previously used telescopes to detect oxygen in the atmospheres of Jupiter’s moons Europa and Ganymede, but similar searches drew a blank on Rhea because the concentration of the gas was so low.

According to instruments aboard Cassini, every cubic metre of Rhea’s atmosphere contains around 50 billion oxygen molecules and 20 billion carbon dioxide molecules.  The carbon dioxide may come from dry ice trapped within the moon, or be produced by high-energy particles striking water ice on Rhea. Another source could be carbon-rich materials deposited by tiny meteors that have bombarded Rhea’s surface.

By comparison, earth’s atmosphere contains 5.323 x 10²⁴ oxygen molecules per cubic metre.  This translates to Rhea’s air having roughly 3.8% as much oxygen as Earth’s air.  So, just for fun:

For flight reservations and information on travelling to Saturn or its moons, visit Virgin Galactic. 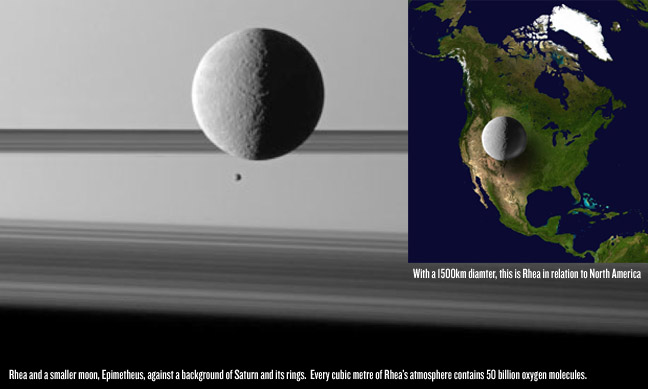