Damien Hirst’s $80,000,000 Diamond-Encrusted Skull “For The Love Of God” Opens In Florence Exhibit On Friday

For Damien Hirst, the hard times of recent years have come as a bit of a relief.  “It’s very difficult to focus when times are good,” the millionaire British artist, who made a record-breaking $198 million at auction in 2008, told CNN.  “You start to think you’re Midas or something, or Jesus if you’re selling everything you make.”

It’s hardly surprising, given that Hirst’s career has been marked by superlatives: the auction, the $80 million diamond skull and, though it’s hard to tell precisely, he’s thought to be the world’s richest living artist.  For Hirst, whose controversial art works sometimes involve preserving dead animals in formaldehyde, the fact that “it’s been a lot more difficult to make a sale” recently isn’t necessarily a bad thing.  “When times are bad you have time to rethink, you have time to throw a lot of things out,” he said. That has meant setting up a studio in his garden shed and picking up his paint brushes again, with mixed results.  “No Love Lost,” a collection of 25 of Hirst’s own Francis Bacon-inspired skull paintings opened at The Wallace Collection in London in late 2009.  It wasn’t well received by UK critics, many of whom were not convinced by Hirst’s abilities as a painter.  “I was poised for (a) slapping,” Hirst said of the reviews. But, he added: “I love painting, and then, the result is not as successful as I’d like them to be all the time, the journey is where I want, the journey where I am, is absolutely perfect.”

He’s not abandoning the past entirely, just yet. Hirst is dusting off his famous diamond skull, entitled “For the Love of God” and putting it on show Friday in the Palazzo Vecchio in Florence, Italy.  The platinum-plated, diamond-encrusted skull from 2007 is the most expensive work of art by any living artist.  So expensive, in fact, that it’s been residing in a high-security bank vault until now.  “It’s just crazy to make an object like that, and also an object of my own that I couldn’t have in my own house,” Hirst said.  In the absence of a buyer, it is jointly owned by Hirst, his gallery, and an anonymous group of investors — who will eventually want their money back.  It’s the one work that, in Hirst’s opinion, will stand the test of time.  (NOTE: The human skull used as the base for the work, bought in a shop in Islington, is thought to be that of a European living between 1720 and 1810. The work’s title was supposedly inspired by Hirst’s mother, who once asked, “For the love of God, what are you going to do next?”)

“Of all my sculptures, this is the one that when we are all dead in years to come, if we’re lucky, it would still be around, or we won’t see it for 100 years and then it would turn up and things like that, and people will die because of it.”

The work that he is, perhaps, best known for, however, is a 14-foot tiger shark suspended in a tank of formaldehyde created in 1992, entitled “The Physical Impossibility of Death in the Mind of Someone Living.”  Commissioned in 1991 by art collector Charles Saatchi, it has since become a symbol of the Young British Artist (YBA) movement that dominated the UK art scene in the 1990s and included artists like Sam Taylor-Wood and Tracy Emin.  It was a riotous decade for Hirst, including, in 1995, winning controversial art plaudit the Turner Prize.  Of that time, he says, “Everything I did was a celebration for about 10 years … we thought thought we could kind of change the world, and I just realized that kind of stopped.”  He says he’s “older, wiser maybe” now. That’s certainly true if the artistic coup he pulled off in 2008 is anything to go by.  Bypassing his dealers, he sent a whole batch of new work, including sharks and a calf in formaldehyde with 18-carat gold horns, straight to auction at Sotheby’s.  The auction, “Beautiful Inside My Head Forever,” famously realized almost $200 million, just a few hours after Lehman Brothers was declared bankrupt. Most of the money went straight to Hirst, whose personal wealth was calculated at £215 million ($340 million) in the 2010 Sunday Times Rich List.  “People still come up to me and say it was a stroke of genius. It was too close to call,” Hirst told CNN.  “I’d love to say that we waited and waited until the time is right, and just when Lehman Brothers collapsed, we said, ‘Now is the time’ and we did it and it was brilliant. It’s just luck really,” he added.

The Hirst brand is still covetable, if not quite as valuable as it once was.  Last month, at the Frieze Art Fair in London, a cabinet of fish in formaldehyde sold for over $5 million and a huge butterfly painting sold at Christie’s for over $3 million.  Now, Hirst has a five-year plan — for sculptures and a new show. “I’m 45 now and there is this show which will take five years to make,” he said. “You can’t fake that, you have to create that.” 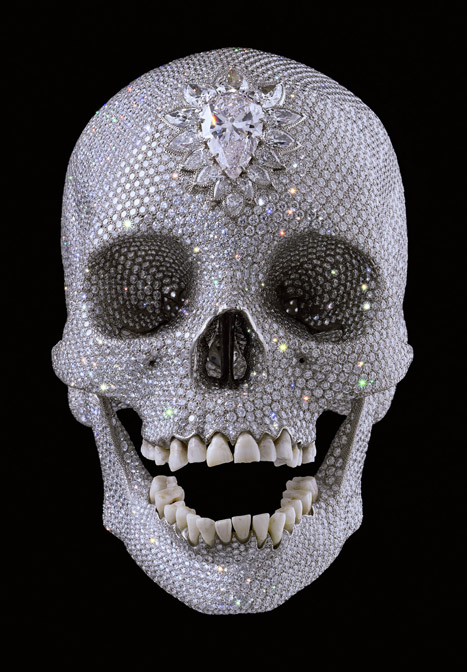